Carrozzeria Castagna was founded in 1849 by Carlo Castagna. It reached the peak of its glory days between 1920 and 1930 producing custom-built bodies assembled on some of the best chassis in the world, like Alfa Romeo, Lancia, Hispano Suiza, Isotta Fraschini, en Mercedes. So exclusive were these bodies, that they won coveted awards at the Concours d’Elegance and the era’s most prestigious shows.

Recently, Castagna has sprung back into action with their latest product first introduced at Geneva, the Mini Wagon. This custom-built automobile is a true Shooting Break: the rear boot was elongated by 25 cm, which lets the car hold up to three large suitcases. Over 200 modifications were made to the original model to form the primary details that emphasis its original styling.

The idea to stretch a mini is not new. BMC produced a variety of body styles for the original Austin Mini including a truck, panel van and a station wagon. Representing the more decorated end of the Mini range was the Woody Wagon, sometimes called a Countryman. Over 200,000 wood-decorated minis were built, despite protest from the vehicles designer Alec Issigonis.

The deserving heir of the historic Mini Traveller and other woody wagons is Castagna’s Mini. The car has an exclusive allure, which mixes a harmony between the intense tones of the woodwork, the aroma of the leather and the natural appeal of wicker. The exterior moulding consists of 20 hand-crafted elements from the wood species that best matches the colour of the vehicle. Wood can be also found around the instrument frames placed on the dashboard and along the tops of the doors. 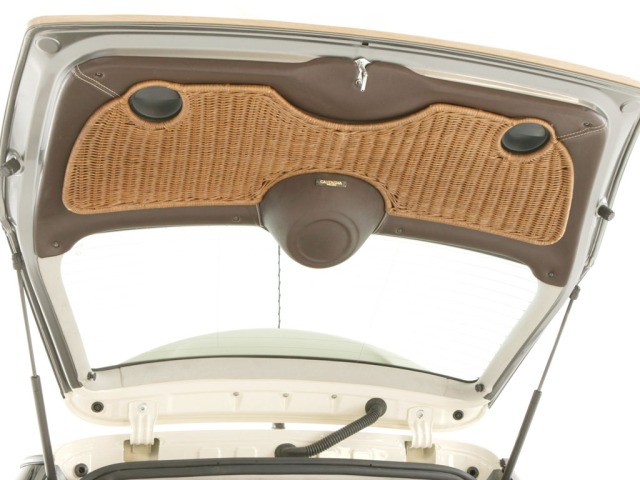 Inside, natural leather upholstery is combined with finely selected fabrics. Another touch of class is found in the wicker kit, a series of panels that cover the luggage compartment to prevent that leather upholstery from being ruined. With their Mini program, Castagna hope to reintroduce the idea of a One Off: a modern interpretation of the custom-built concept first adopted in the 1920s. These single vehicles will be thoroughly tested and designed by Castagna by specific request. Tailor made in Milan, Castagna are now taking orders for unique conversion projects based on the Mini platform.

Come into the world of Castagna.