Even as a teenager, the flame of passion for genuine Middle Eastern fragrances and attars burned brightly in Frédéric Malle. He would sometimes come across the real deal in London, Paris, or the south of France where even brief exposure to real oud was enough to leave a deep and lasting impression. At first strange and then beguiling, the young Malle began to dream of a way to bring the intoxicating aroma of real oud to the Western world. In his opinion, the exceptional fragrances worn by Arabs were utterly foreign to Western noses used to the calmer, more polite smells of French perfumery.

During his training as a perfumer, Frédéric Malle got the opportunity to smell many oriental perfumes boasting the inclusion of precious oud and other oils, and for the most part, he was deeply disappointed. For him, these scents were merely a pale imitation of what he had smelled in the Middle East, accomplished by perfumers who had obviously never set foot outside of France. No, he thought – a real oud oriental is dark and animalic enough to bowl one over! If you are going to do an oud – do it right. 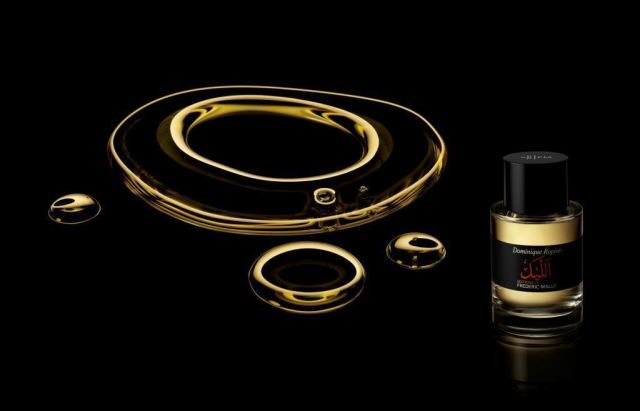 It took him a long time and years of intensive research in the very places where oud wood is harvested and distilled into oil to first understand and then find a way to interpret the material in a manner that preserves the original, authentic smell of oud. His good friend and master perfumer, Dominique Ropion, accompanied him on his trips to the East, to see for himself firsthand the intricacies of oud oil distilling. Back in France, the pair immediately began their first experiments.

With The Night, Dominique Ropion has created the first fragrance for Editions de Parfums Frédéric Malle to use substantial quantities of real oud oil.
Unlike the majority of Western, commercially-produced oud fragrances that contain either only a trace amount of real oud oil or instead use a synthetic oud replacer from Firmenich or Givaudan, The Night uses real oud oil, and in heart-stopping amounts. The Night is based on a high concentration of Indian oud oil, long prized in the East for its stark, imposing scent profile that flits between leather, hot spice, and barnyard aromas.

Authentic and animalic, it may prove shocking to noses unused to real oud oil – but just wait, because this complex aroma is something that causes people to go into fugue states and become addicted. A rich support in the way of Turkish rose and buttery amber is provided; but make no mistake about it, this is a fragrance that features that animalic, leathery Indian oud in a starring role. A real love-it-or-hate-it fragrance, it is an unforgettable experience for true lovers of perfumery.

Unlike perfumes specifically called ‘Oud’ which contain, at best, a trace of this precious raw material, this is a fragrance built on an unprecedented proportion of Oud from India, which Domi­nique has mixed with a generous amount of Turkish Rose and Amber. The quality of these natural Ouds and the Rose is superb. This is an oud-centric creation that is quite simple, but like a simple dish perfectly executed is a delight to be savoured, so does this comparatively straightforward olfactory dish deserve a high mark.

The oud is dominating the first hours, and what a fine oud it is! Typical is its aroma, with a smoothly civety undertone so typical for agarwood, with its tanginess and the notion of dried hay – this oud is beautifully executed out of the natural product.

The rose comes to the fore very slowly; it is a fine, slightly somber rose that blends in seamlessly with the oud. One thing is clear though: the oud is clearly the dominant note here, and the rose plays an accompanying role like the orchestra in a violin concerto- the oud is the soloist.

Frédéric Malle The Night by Dominique Ropion is availble as 50 ml and 100 ml Eau de Parfum.