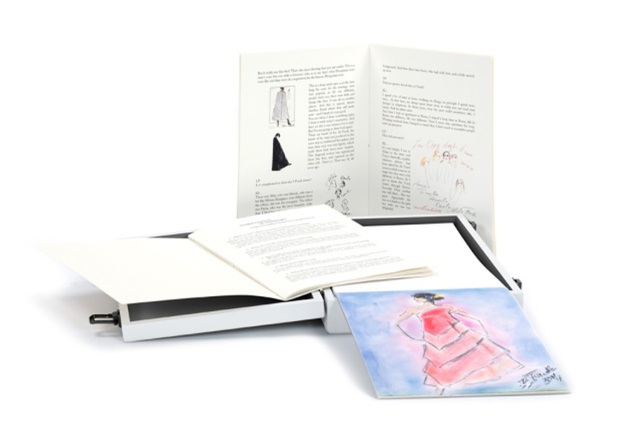 ‘Fendi by Karl Lagerfeld’ book by Karl Lagerfeld looks back at his tenure as creative director of the Roman furrier, which he joined in 1965. The distinctive book celebrates the designer’s 50-year collaboration, billed as the longest relationship in history between a designer and a fashion brand.

It’s a wooden box full of goodies that comprises of scrapbook with more than 200 sketches of directional Fendi looks done by the designer, a Q&A session and a USB stick with MP4 files that shows Lagerfeld sketching his memories live as he speaks.

During the 68th annual Cannes Film Festival, CEO Pietro Beccari and womenswear creative director Karl Lagerfeld hosted a special presentation of the ‘Fendi by Karl Lagerfeld’ book at the Plage Royale. Following the launch in French Riviera, Fendi reopened its newly renovated boutique at the Croisette in Cannes, which has been redesigned in lighter colors. The shop also highlights the brand’s craftsmanship as well as fast growing ready-to-wear collection. The exclusive launch party which took place on the shores of Cote d’Azure was attended by Fendi-clad celebrity guests like Lily Donaldson, Lindsey Wixson and Kendall Jenner.

A real must have! Published by Steidl, Fendi by Karl Lagerfeld book set will be available at Fendi boutiques and high-end bookstores worldwide from July for a little over $100.