Lovers of royal history will surely be excited by this  unique collection of fourteen original candid, behind-the-scenes photos from the wedding reception of Princess Diana and Prince Charles, soon to be up for live auction.

Originally the property of Patrick Lichfield, whose peerage descent allowed him unparalleled access to the Royal Family, the photos are from Diana and Charles’ reception held at Buckingham Palace on July 29, 1981, following the ceremony at St. Paul’s Cathedral.

The present collection consists of seven black-and-white glossy photos, five color satin-finish photos, and the pass used by Lichfield’s assistant for access to the palace. 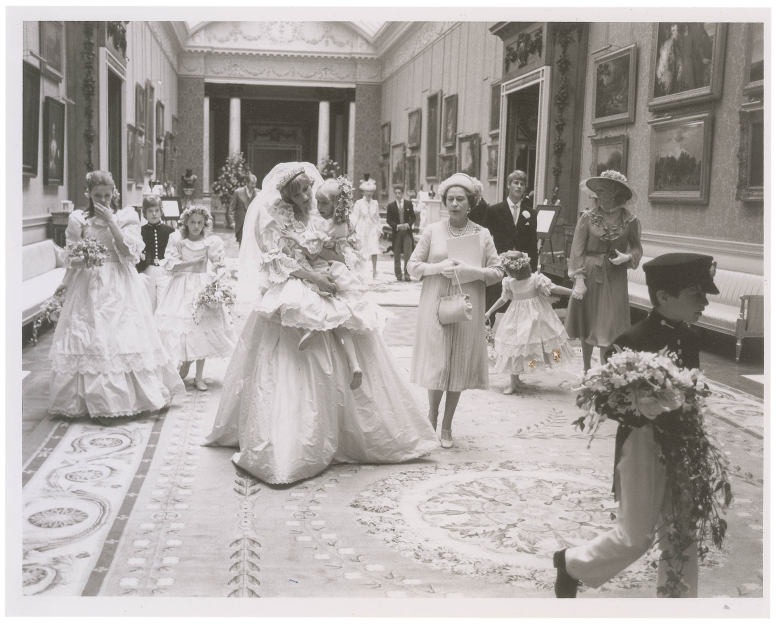 Three show Princess Diana holding the five-year-old Clementine Hambro, her youngest bridesmaid; one shows her setting Clementine down; and another shows her smiling as Prince Andrew leans over to talk to Clementine. Queen Elizabeth is clearly visible walking alongside Princess Diana in four of the images, and the Queen Mother is seen in two. Prince Charles is also in two of these photographs.

The last of the photos is the most striking of all, depicting Princess Diana and Prince Charles from behind on the famous balcony overlooking the massive crowds gathered on the Mall in front of Buckingham Palace. 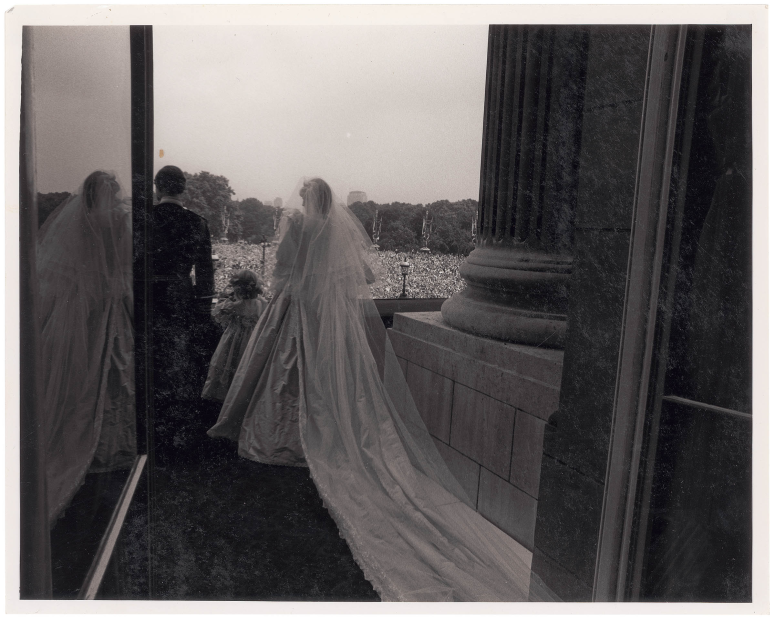 The color photos all bear official Lichfield labels asserting copyright affixed to the reverse and show various interior scenes: two show Queen Elizabeth watching a small television broadcasting images of the massive crowd outside; one shows Princess Diana in the Throne Room as her dress designers Elizabeth and David Emanuel arrange the train in preparation for the formal photographs; one depicts Princess Michael of Kent from behind in her turquoise dress; and one shows the Royal Family gathered for the formal photographs, with Mark Philips, Prince Andrew, Princess Diana, Prince Charles, Earl Spencer, the Duke and Duchess of York, and Baroness Fellows all seen in the image.

The photos are unique in that they are from the only photographer allowed to take informal photographs of the royal family and their guests when they returned to Buckingham Palace after the wedding.

The auction is actually happening stateside, the Remarkable Rarities Live Auction event from RR Auction will be held at the Royal Sonesta Hotel, Cambridge, MA on September 24, 2015.