A new fragrance imbued with the secrets of the East. This is the revelation of Ambre Éternel, the second composition, after Santal Royal, in the Guerlain’s Les Absolus d’Orient collection. A tribute to the Middle East, to which perfumer explorer Thierry Wasser is adding a personal interpretation of Amber in 2016.

To create Guerlain Ambre Éternel, Thierry Wasser’s unique approach guided his steps to the Middle East, like a scientific traveller. He returned with a powerful sillage that makes the ideal scent for men and women alike. Contrary to Western tradition that often associates amber with the gourmandise of vanilla, in the East it belongs to a drier, woodier perfume family.

The main ingredient in this amber accord is Ambergris, which gives Ambre Éternel its sensual, voluptuous character. It is a rare and precious raw ingredient, naturally secreted by the sperm whale, whose fine qualities are revealed after several years’ oxidation under the action of seawater and the sun’s rays. Thierry Wasser chose different blocks of ambergris on the basis of their iodine, warm or animal scent to create an exceptional blend, known as a communelle, and thereby obtain the perfect amber note. This note, traditionally extracted through a maceration process, will be used in the fragrance’s composition in the form of a tincture to preserve all of its purity. 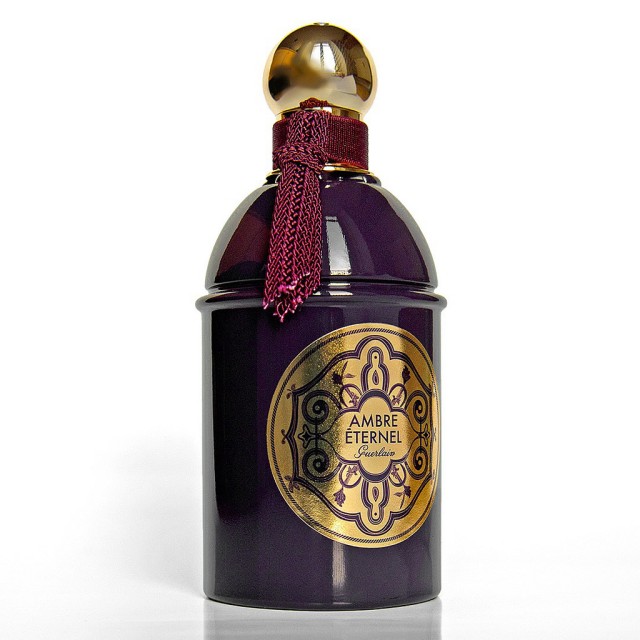 The amber accord then unfolds, roused by the spicy facets of cardamom and coriander, before delicately melting into a blend of orange blossom absolute, leather and woody notes.

A magnificent flacon in tones of amethyst and gold adorned with a label inspired by Guerlain’s heritage, set off with a plum ribbon.