Brussels, 24 May 2016 – From today onwards, no fewer than 371 Belgian guys next door will feature as (role) models in the Belgian streetscape, in the context of the campaign for the new product Axe Daily Fragrance. In this campaign, Axe is literally putting the ‘magic’ of over 371 Belgian men in the spotlight for a week on digital billboards in the largest Brussels metro stations. The national poster campaign highlights three young men, each with his own unique masculinity. 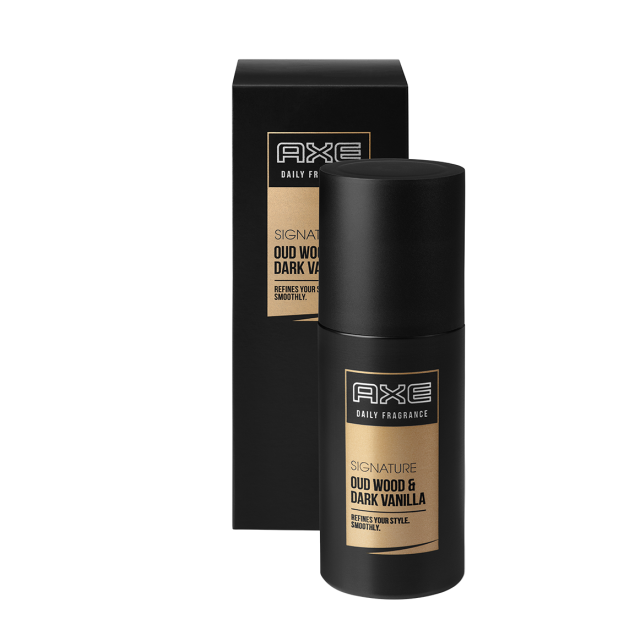 Axe is therefore launching a media campaign for and by men. “In line with our repositioning, by means of this campaign Axe aims to encourage men to explore their individuality and be proud of everything which makes them exceptional as individuals. Alongside ‘Oud Wood & Dark Vanilla’, the two ingredients of the Signature perfume, the men in our campaign have added their own magic and turned this new fragrance into a unique product,” says Ankatrin Pessemier, Brand Manager for Axe Belgium. As well as the Daily Fragrance Signature, Axe is also launching the variants Urban (Tobacco & Amber) and Adrenaline (Iced Musk & Ginger). 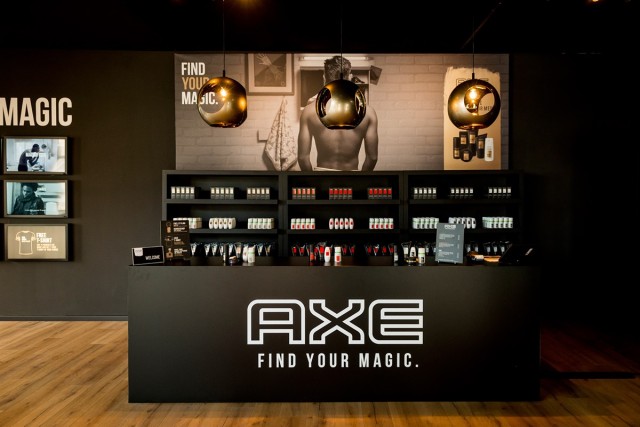 All 371 men visited the pop-up Axe Store in Brussels between 14 April and 11 May. Thanks to the Axe male grooming team, they not only discovered their ‘magic’ in the store but also achieved their own moment of fame at the same time. This is because, after their magic had been highlighted by the grooming experts, the men were given the opportunity to have it immortalised by a professional photographer. From today onwards, it is these photos that will be a central feature in the media campaign.

WHAT IS THE MAGIC OF THE THREE ‘REAL’ MEN ON THE POSTER? 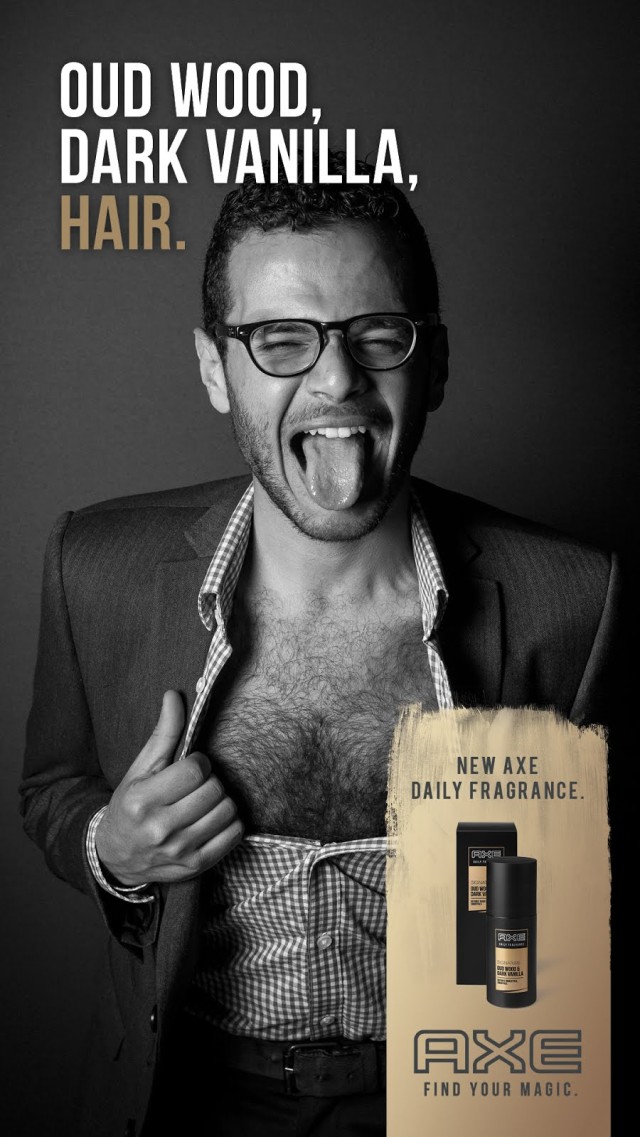 Ferdinand L., aged 20, alias ‘Old wood, dark vanilla, sax’ comes from Brussels and plays in several bands. He discovered the Axe Store on his way to the Brussels music conservatory where he is currently studying. In the end, it was his girlfriend who convinced him to visit the Axe Store: “I come from a musical family, so every aspect of music is written into my DNA. I started playing saxophone when I was eight years old. The world of music and my sax have greatly enhanced my life, not to mention all the people I’ve met as a result. Take my girlfriend, for example: I invited her to one of our rehearsals and the music did the rest…”. 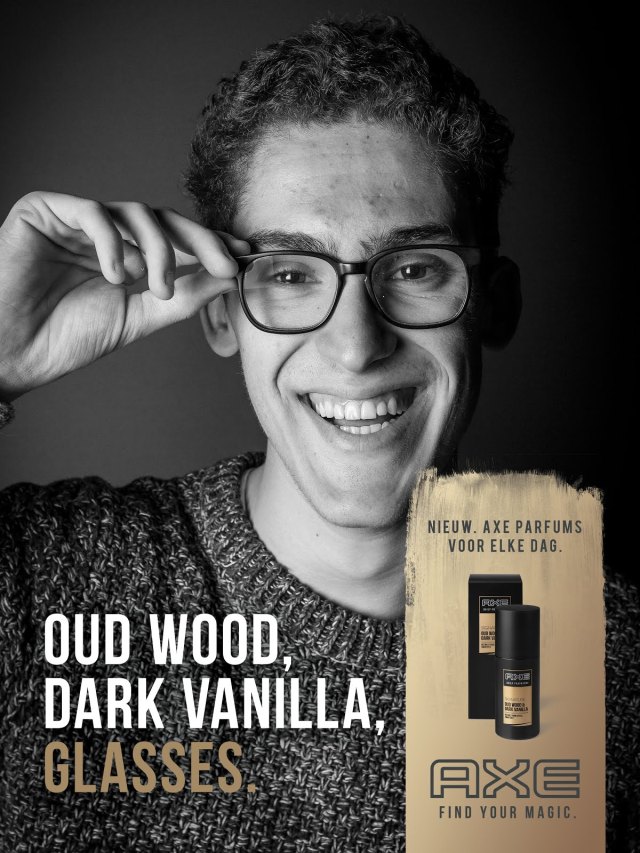 Cedric G., aged 18, alias ‘Old wood, dark vanilla, glasses’ comes from Hasselt and is studying in Brussels. He happened to wander into the Axe Store with a friend. ‘His’ magic is his glasses: “There was no doubt in my mind that ‘glasses’ was it. I’ve been wearing my glasses for such a long time now that they’ve really become part of who I am. I tried lenses, but I felt much better with glasses. Today, they are one of the defining features of my face and my character. As a result, I wear them with great pleasure and pride and wouldn’t dream of changing them”. 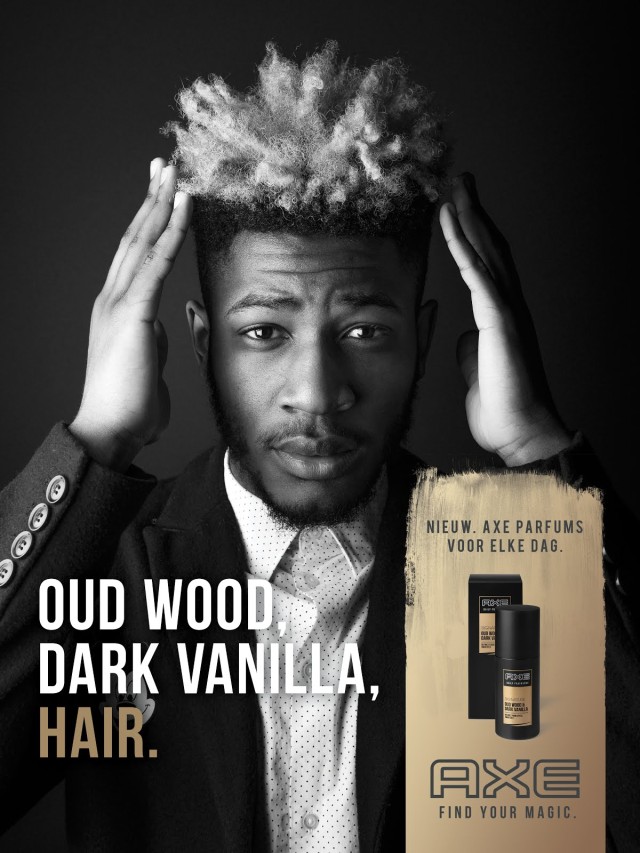 Yveric M., aged 20, alias ‘Old wood, dark vanilla, hair’, comes from Verviers and is a student in Brussels. He was on his way to his mother’s restaurant when the Axe Store crossed his path: “I really wanted to make a drastic change to my style and thought I’d try a mind-blowing hair colour. In the end, I was brave enough to go blond! People stopped me in the street to compliment me. Friends and acquaintances were impressed that I’d had the courage to go for such a radical departure from my own hair colour. And it wasn’t just them. A Belgian designer has already asked me to model and a rapper I know asked me to feature in his videos. And now I’m here on a billboard for Axe. How crazy is that? And all because I dared to dye my hair blond”.