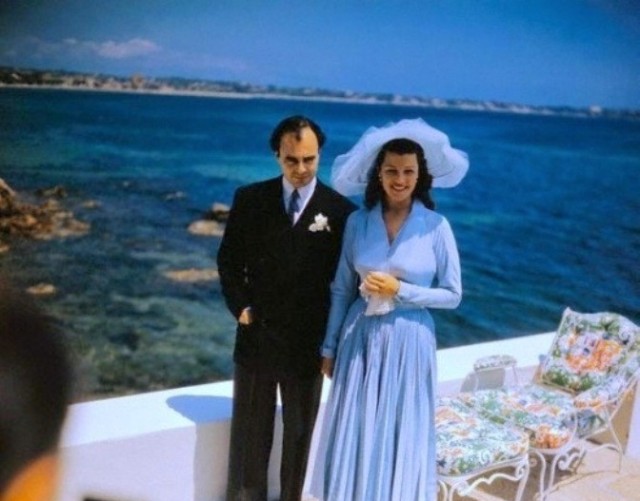 In 1948, the American actress was introduced to the Prince Ali Khan at a party thrown by columnist Elsa Maxwell and the lovers promptly engaged a relationship threatened by religious groups and Hollywood narrow-minded spirits denouncing their affair that had begun when both were not yet officially divorced but also scandalized by the non-Christianity of the playboy prince.

Whatever, the sexy actress turned into a princess and stayed away of screens, dedicating herself to domestic life and her two daughters.

Her Highness The Begum Aga Khan III attends the wedding of her stepson Prince Aly Khan to Rita Hayworth at Château de l’Horizon in the South of France on May 27, 1949.

However, fairy tales don’t always lead to happy endings and Rita Hayworth called for divorce in 1951 after her husband was remarked with Joan Fontaine. Rita Hayworth had left the spotlights of Hollywood for the soft sunlight of elegant holiday resorts but was constrained to return to obscurity, behind the oppressive shadow of Gilda.