French fashion house Chloé was founded by designer Gaby Aghion in 1952. Born in 1921 in Alexandria, Egypt, Aghion moved to Paris in 1945 and launched fashion house Chloé in 1952. During the next year of 1953 Aghion joined forces with Jacques Lenoir, formally managing the business side of the brand, allowing Aghion to purely pursue the creative growth of Chloé.

Aghion is widely credited for coining the fashion phrase and concept of Pret-A-Porter (ready-to-wear). In contract to the stiff, formal made-to-measure clothing offered by couture designers of the 1950’s. Gaby Aghion chose to create wearable, soft, form-fitting clothing of luxurious fabrics, intended to be purchased ‘off-the-rack’. This was a revolutionary and trend-setting concept in fashion at that time, as well as a long lasting motif in the fashion industry.

In 1966 Karl Lagerfeld is the main designer and Chloé becomes one of the symbolic brands of the 1970s. Among its customers: Jackie Kennedy, Brigitte Bardot, Maria Callas, Grace Kelly, and Begum Om Habibeh Aga Khan. Five years later the first Chloé boutique opens at the 3 rue Gribeauval in Paris. 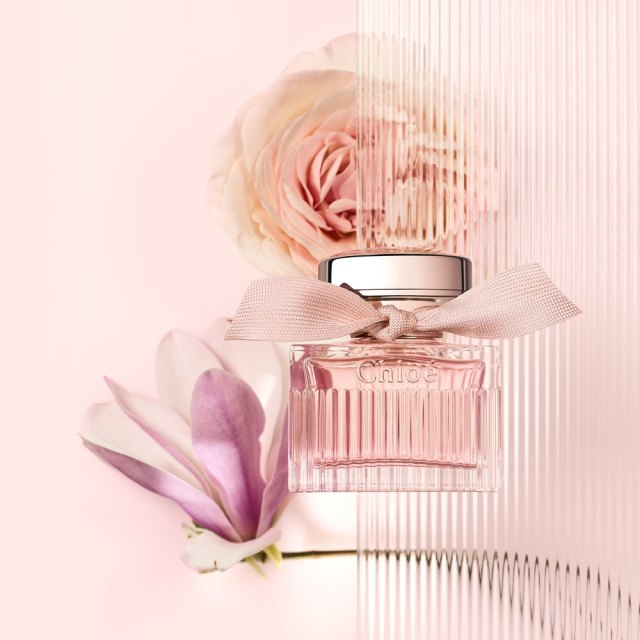 Chloé’s first fragrance, the eponymous Chloé fragrance for women launched in 1975, was an an enduring feminine classic. Chloé Narcisse sweetened the mix for the 1990’s. The French Maison has retained contemporay appeal with the launch of a new version of Chloé in 2008.

Chloé L’Eau Eau de Toilette offers a luxurious bouquet of roses sublimated with beautiful, lively magnolias and offers the story of a dazzling, free-minded woman. The re-discovered fragrant Chloé signature captures the unique freshness and essence of daring femininity in harmony with nature.

The composition at the opening offers gentle and fresh rose aromas combined with fresh, fruity juices of litchi and grapefruit, while the heart introduces the absolute Damascena rose in an embrace with magnolia flowers. The base is characteristic of the accord of oak moss, cedarwood, musk, and amber.

This time L’Eau Eau de Toilette comes in a light coral pink packaging. It fills the famous ‘pleated’ glass flacon decorated with a coral pink ribbon color, also used for the outer packaging. The flacon is crowned with an elegant rounded cap.