The French Maison’s collection honors the their long-standing tradition of creating fine objects. Skilfully and uniquely crafted in precious leathers and metals, lacquer and marquetry, each of these designs manifests the Cartier ‘Art de Vivre’.

Based on a quartzite, a panther sculpted from black nephrite jade with tsavorite eyes, looks playfully to the High Jewelry Panthère des Glaces clock. The clock was created of 18k white gold, rock crystal, and 40 brilliant-cut diamonds totaling 1.24 carats, The hour marker and crown are made of blue opal. A 6002MC mechanical movement with manual winding tell you the time.

Ohh how beautiful and timeless is this beauty. But for me only something to dream of…. Come into the beautiful and precious world of Cartier.

The Cartier tradition of clock and watch making extends almost as far back as the founding of the company. In 1898, Louis Cartier, one of the three Cartier brothers and grandson of founder Louis-François, moved to 13 rue de La Paix with his father, Alfred. Louis was a talented creator of jewels and art objects, and confirmed his talent by tying his craft with clock making traditions, lost now for more than a century.

Thereafter, Cartier’s clocks, table clocks, and watches were manufactured with an emphasis on perfection, beauty and originality. Clock making, at first a secondary activity, became the predominant activity and prestige of Cartier. 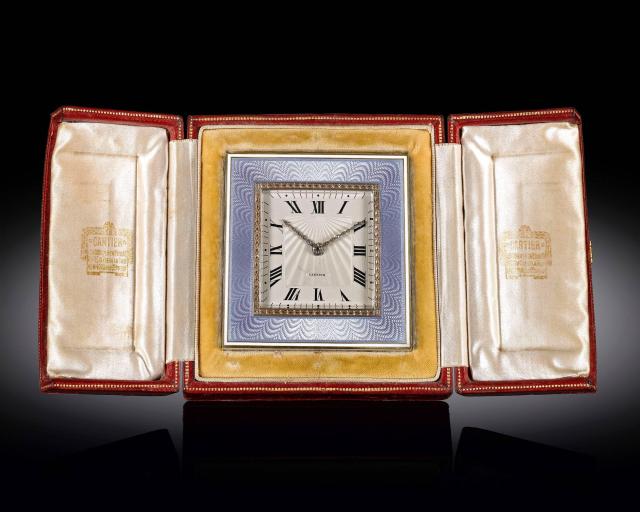 Mademoiselle’s apartment, at 31 Rue Cambon in Paris, provides an endless source of inspiration. Unique pieces and an atmosphere that is frozen in time sparkle the creativity, giving life to exceptional pieces.

Born under the sign of Leo, Gabrielle Chanel made the powerful, majestic lion her protector. In 2018, the Monsieur collection reveals an exceptional piece designed by the Chanel Creative Studio: the Chronosphere Clock.

Monsieur Chronosphère Clock is one of these, and it represents a new chapter in the French Maison’s watchmaking history.

Coco Chanel’s private room at 31 Rue Cambon Paris. The crystal ball which inspired Monsieur Chronosphère Clock is visible on the coffee table, on the left.

One of the biggest surprises coming from Maison Chanel this year is this breathtaking desk clock, designed by the legendary Parisian house and developed and manufactured by the famous master clockmakers from L’Epée 1839. Called Monsieur de Chanel Chronosphere, this ravishing clock is basically an objet d’art that tells time, made of glass and about 15 cm in diameter, reflecting the brand’s distinct style.

The sphere was actually inspired by a rock crystal ornament from ‘Coco’ Chanel’s apartment, that was imagined back then by the French jeweler Robert Goossens. Inside this stunning glass sphere you’ll see L’Epée’s seven-day, cal.1855, an incredible movement with a vertical escapement that brings the entire show to life.

Two mesmerizing drums will show the hour and minutes from the upper half of the globe. The numerals show off Chanel’s own modernist typeface that was actually inspired by the numbers on LCD displays in electronic watches. Meanwhile, the plates of the movement have been black coated with PVD while the gear train is plated in palladium.

Sleekly monochromatic, the glass globe is held up by four solid bronze lions, cast in a faceted, sculpted form that’s reminiscent of the Art Deco movement, with a matte black finish. In case you might want one of these incredible desk clocks, you should know that the Monsieur de Chanel Chronosphere Clock will be produced in a very limited run of just five units, each of them expected to cost around €200,000. Beauty doesn’t come cheap.

Come into the world of Chanel…… Cartier is a passionate observer of beauty throughout the world, always hunting for rare, unique stones. Now it has created a new collection of High Jewelry: the Cartier Royal Collection. Royal… for the quality of the gems, the inspiration of the design and the perfection of the result. It is an eclectic collection sparkling with High Jewelry creations and unique objects that represent a combination of rigor, curiosity and passion…. Maison Cartier has designed an accessories collection that stands to its tradition of excellence and unique flair for fine objects. These delicately handcrafted pieces act as precious adornments, offering an ever-present touch of elegance. 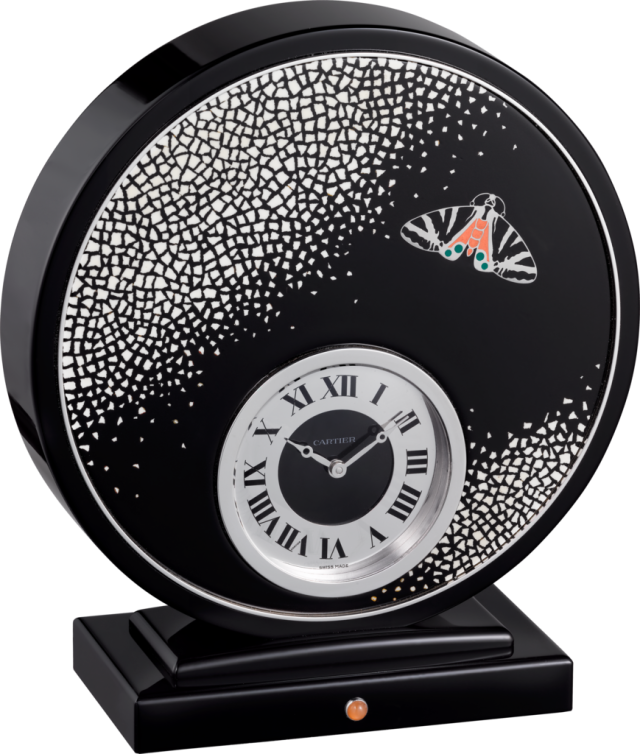 On of this handcrafted precious pieces is this clock with artistically crafted eggshell mosaic. A limited edition of 20 individually numbered pieces. This exceptional clock is made of palladium-finished 925 sterling silver with artistically crafted eggshell mosaic, black, orange and green lacquer. 2 orange moonstone cabochons, black Roman numerals and palladium-finish apple-shaped hands. The clock has a 6002 MC mechanical movement with an 8-day power reserve.

Celebrated watchmaker Jaeger-LeCoultre and industrial designer Marc Newsome have worked together several times before on Atmos clock models and have wowed us each time. The latest model in the Atmos series promises the same innovation and technical complexity as those that came before it. Jaeger-LeCoultre and Newsome have recently revealed the Atmos 568 clock which is actually housed in a Baccarat crystal cabinet.

The transparent crystal gives the clock a cool futuristic look and evokes a feeling of clean minimalism. The Atmos was originally created in 1928 and runs on the strength of a mix of gases hermetically sealed inside a capsule. The gases expand and contract with temperature changes in the room, their expansion swell the bellows of the accordion and power the clock. Even minute changes of a single degree are enough to keep the clock running for two days.

For the new 568 version, Newsome has redesigned most of the visible parts including the hands, dial, case and counterbalance.

When looked at through the front of the clock, the mechanism appears to float in midair, but a look through the back reveals the points at which it has been secured in place.

Bold blue numerals mark the indices and the month marker is part of the transparent dial. Moon phases are indicated on a white moon and blue sky at 6 o clock.

I asked myself: to what extent could I express myself within that object? And that, in fact, was the real challenge. … Despite the careful consideration for designing the interior elements, the “wow factor” of this clock is the Baccarat crystal case with its rounded cube shape. However the case was extremely complex to fabricate, there was an enormous amount of work and development required to perfect the shape.

The clock is a rounded cube, with the crystal at certain places being only 13mm thick to amplify that feeling of lightness and airiness.

While the previous Newson clocks were limited editions, the Atmos 568 is part of the regular collection.

Marc Newson reinterprets the Atmos clock by reworking its classical style while preserving all its essential features, allowing an icon of watchmaking to become an icon of style. Unveiling its secrets little by little, the Atmos 568 will intrigue the gaze of connoisseurs of beautiful objects.

The Atmos 568 by Marc Newson (ref. Q5165107) is available from both Jaeger-LeCoultre boutiques and retailers starting December 2016, priced at $28,000. The clock features both brand names and promises to be a showstopper at the 2017 Salon International de la Haute Horlogerie.

A beautiful Cartier ‘La Captive’ Swiss attractive Art Deco silver enamel travel, puse watch in fair condition, owned by Begum Andrée Aga Khan. It is known that Cartier commissiond Tavannes as the maker, considering the succes of the ‘La Captive’ series, commissioned by many other famous boutiques and famous fashion houses. The watch has been manufactured around 1930’s.

The watch has a lovely, nickel finish movement in working condition and a winding mechanism through the crown at twelve. The watch is crown wound and set. 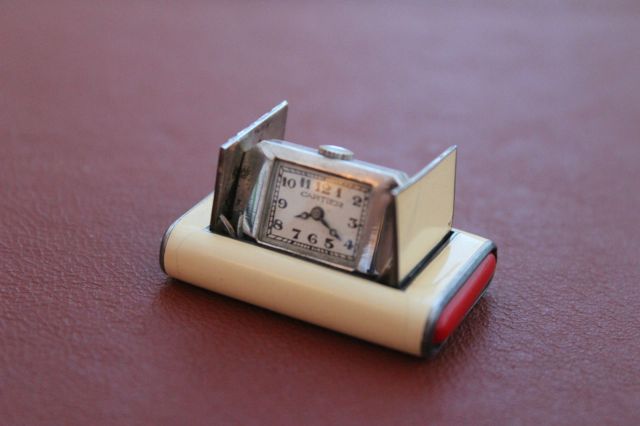 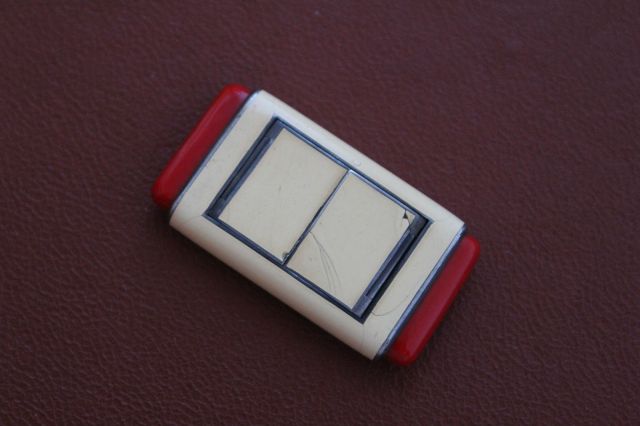 The watch is folding into the lovely opaque enamel decorated case. It is released when the two red enamel inlay side buttons are pressed and turned face down.

The white rectangular dial is in good condition, with minor signs of aging. The dial features black Arabic numerals and blue Breguet hands set, while the crystal is in great condition.

The case opens and closes nicely, the trap door hinges being in good condition. The case enamel shows various signs of wear, cracks, hairlines or chips and other marks from general use and opening, however it remains in a good original condition.

Ohhhh I love clocks!! Especially those little Art Deco table clocks, made by Cartier, Chaumet, Van Cleef and Arpels. But it where not only the famous French jewelry brands who made them. What to think about American leading jewelry company Tiffany & Co?

Albert Einstein said that ‘time is an illusion’ but this incredibly handsome Tiffany & Co desk clock in nò mirage! I found this important, French made(!) 1920’s rare Art Deco Tiffany & Co Diamond and Agate Desk Clock. A true beauty! A real treasure! This beautiful desk clock is based on an agate with rounded corners, each centring a floral diamond cluster. 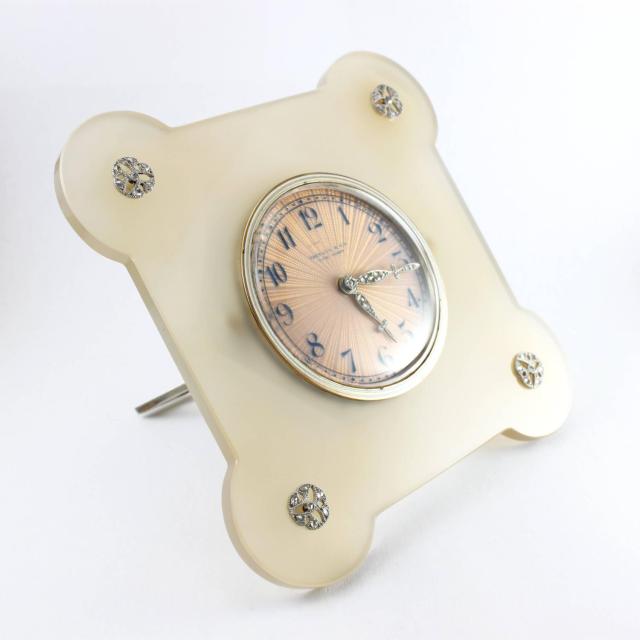 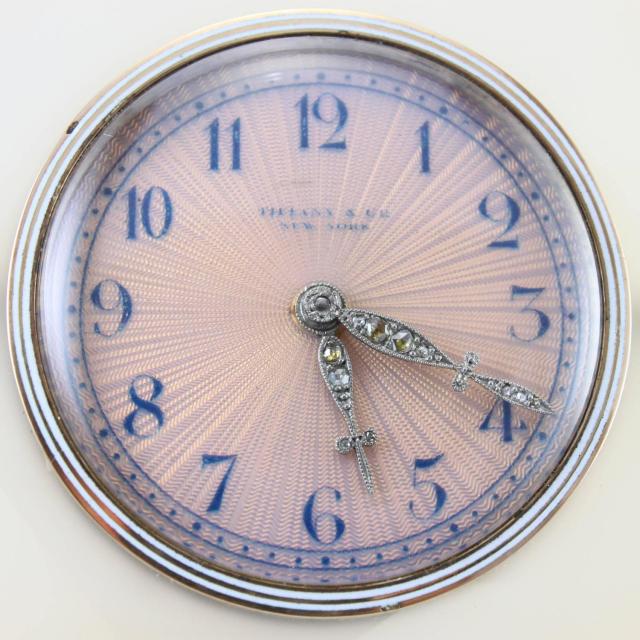 The clock’s dial is beautifully made in a reflective salmon-colored guilloche enamel work, surrounded by a gold dial with white enamel rings. The dial-hands are made of diamonds in the typical manner of Tiffany & Co.

I lòve watches, and I lòve clocks… those litte tiny French desk or table clocks. Regular visitors of Yakymour see them sometimes as background decoration in different posts. This Cartier Art Deco clock is made of 18k solid yellow gold, with a luminous dial for reading any time. The hands look to have been retouched, but the package includes the original fitted leather presentation box or foudral. The 5 day movement inside was made by Lemania, who was making mechanical movements for a lot of top watchmakers at the time.

With its sleek geometric forms and bold, Eastern-inspired color palette, the present clock by Lacloche Frères epitomizes Art Deco style. Eastern symbols and aesthetics proved the perfect companion to the crisp lines of the Art Deco era, with design firms incorporating Chinese, Indian and Egyptian-inspired motifs into their works. 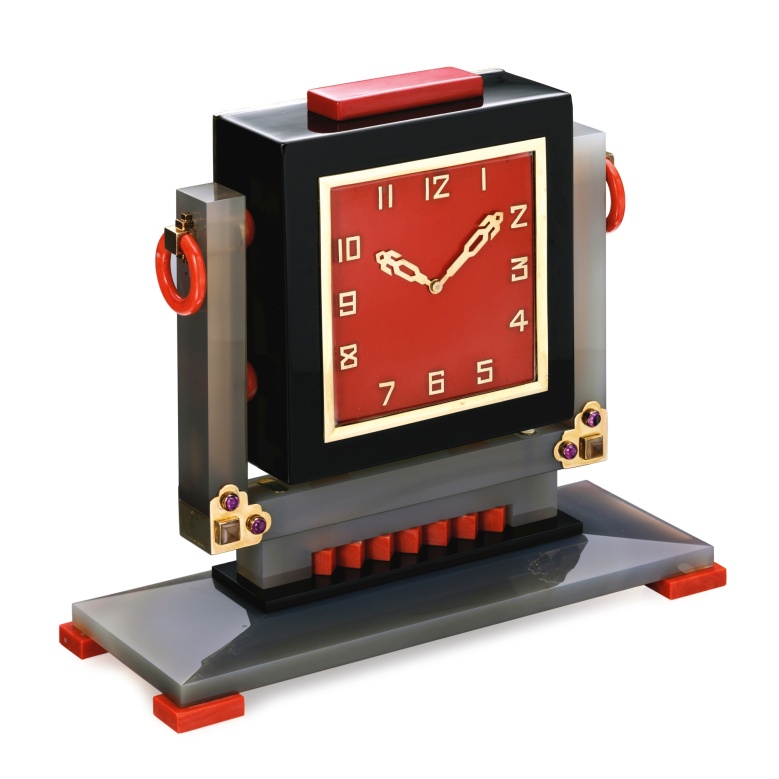 This example takes a form that resembles a Chinese gong, suspended within an angular frame and rested upon a plinth. The colors too hold symbolic meanings in Chinese culture, with red symbolizing fire, good fortune and joy and black often symbolizing the neutrality of water. It is fitting that Lacloche Frères would pick this color palette, as the yin and yang quality of the hues sits in harmony with its repetitive square and rectangular motifs.

At the time this clock was made, Lacloche Frères was considered one of the finest jewelers in the world. Having taken over Fabergé’s London workshop in 1920, the firm gained popularity for their intricate designs, most notably with vanity cases, boxes and clocks. The present example, created at the height of the firm’s popularity and created in a purely Art Deco form, is a rare glimpse into the elegance of the Art Deco time.

The coral-hued dial with Arabic numeral indexes and stylized arrow hands, within a silver-gilt case applied with black and red lacquer, the frame and base composed of agate, coral and onyx carved and applied in geometric motifs, further decorated with cabochon rubies, onyx and agate sugarloaf cabochons and coral beads and rings, measuring approximately 5 by 6 by 2¼ inches, the mounts composed of 18 karat gold, manual movement, the gold mounts signed Lacloche Frères, with French assay and partial workshop marks, the case signed Lacloche Frères, numbered 892, with scratch numbered 7.5.5.D.V., with French assay and workshop marks; circa 1930. With signed and fitted box.