His Highness the Aga Khan, the 49th hereditary Imam (spiritual leader) of the Ismaili Muslims today announced a grant of US$ 320,000 for medical equipment by the Om Habibeh Foundation established by the Aga Khan’s late step-grandmother, Om Habibeh, the Begum Sultan Mahomed Shah.

Following a meeting with the Governor of Aswan, H.E. Samir Hassanin, the Aga Khan announced the grant as part of a series of new development initiatives to benefit the people of Aswan. These included a plan for a social development training centre to have national reach, and programmes in the areas of nursing education, pre-school education and the strengthening of civil society organisations. The new initiatives in Aswan will complement an extensive social and urban development programme underway on the edge of the historic city of Cairo.

Aswan and the people of Aswan, have a place of deep affection in my heart and within my family.

His Highness the Aga Khan IV

The Aga Khan went on to state that the Aga Khan Foundation (Egypt) which was in the process being established as a national entity would work in Aswan through the Om Habibeh Foundation which is an affiliate of the Aga Khan Development Network.

The programmes announced today intend to both continue, and also to build significantly on, the work begun by Begum Sultan Mahomed Shah. Our objective, is to strengthen civil society at the grassroots by helping to improve community development organisations and by bringing to bear on critical needs in this area, the panoply of experience and resources of the Aga Khan Development Network.

His Highness the Aga Khan IV

Governor Hassanin expressed sincere gratitude on behalf of the people of Aswan and pledged to extend the Governorate’s full cooperation and support to the new initiatives which he said both responded to immediate and long-term needs, and reinforced the warm and close historic links that bound the Aga Khan, his family, and his community to Aswan and to Egypt. 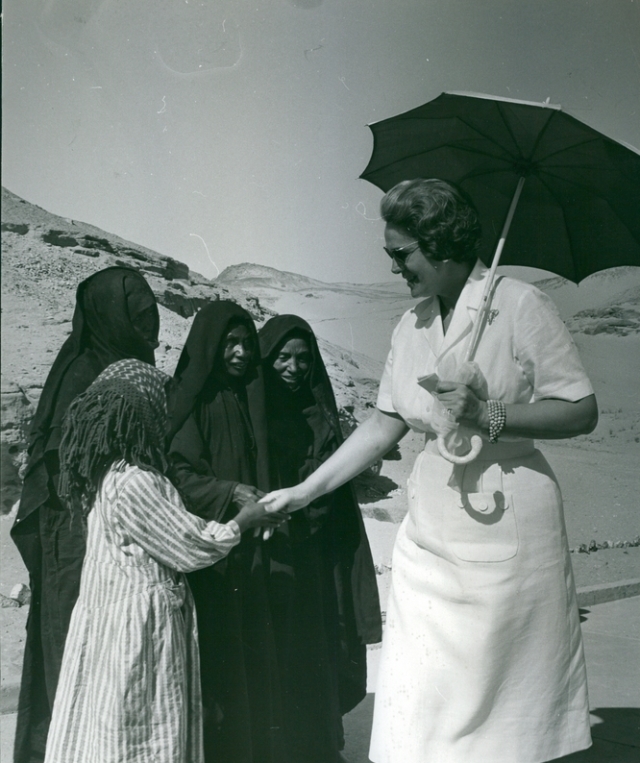 It is hoped that the Aga Khan University will be invited to provide the planned support for nursing education. The University operates programmes in this field in six countries in Africa and Asia. It also supports training in the healthcare field in Syria and its teaching hospital handles referral services through a presence in the United Arab Emirates. Early childhood education has been an area of expertise for the Aga Khan Education Services for many decades now. Besides facilitating and providing pre-school education on four continents, the Aga Khan Education Services has just announced that it will establish an Early Learning Centre in Dubai to offer broad, holistic, early childhood education on a secular and non-denominational basis at the highest international standards of excellence. The Aga Khan Foundation is active in a number of countries in promoting an ‘enabling environment’ for the emerging non-profit citizen sector, by providing advice and related institutional strengthening services and by helping to forge new models for partnerships involving government, business and citizen organisations to extend, improve and sustain health, education and welfare services for underprivileged populations.

The Om Habibeh Foundation is an Egyptian, not-for-profit organisation of long-standing that has been contributing to, and supporting, a number of institutions in the Aswan area involved in healthcare, education and income generation for disadvantaged communities. The Foundation will draw on the support and technical expertise of the agencies of the Aga Khan Development Network to advance the newly announced initiatives.

Om Habibeh, the Begum Sultan Mahuhammad Shah was born Yvette Blanche Labrousse in 1906, of a father who was a tramway driver and a town councillor for Le Cannet and a mother who was a seamstress. Nothing in her modest upbringing told anything of the glorious destiny that was to be hers. After bieng elected Miss Lyon in 1929, then Miss France in Paris in 1930, she joined the Miss Europe 1930 pageant in Paris, won by Miss Greece. She started to travel around the world and settled in Egypt.

There Yvette Labrousse met her future husband, Sir Sultan Muhammad Shah Aga Khan III, 48th Imam of the Nizari Shia Ismaili community (the present Aga Khan’s grandfather and predecessor as Imam), whom she married on 9 October 1944 in Switzerland, and took the name of Om Habibeh (Little Mother of the Beloved) and became Begum, fully Begum Om Habibeh Aga Khan. In 1954, Om Habibeh was given the title of ‘Mata Salamat’, which literally means serene or peaceful mother. She was the foutyh women in Islamic history with that title! They settled in the villa Yakymour at Le Cannet, above Cannes, on a hillside wich she had once looked on to from the flat in the Rue d’Antibes, for which planning permission applications had been submitted in 1937.

She and her husband, Sir Sultan Mahuhammad Shah Aga Khan spent also many happy times at their home Noor El Salam by the banks of the Nile at Aswan. When her husband died in 1957, Om Habibeh started building at Aswan, on top of the hill above there house, a mausoleum to her husband, immediately after his death, while finishing it took 16 months. After the death of her husband, she continued to live at Yakymour, le Cannet, France, though she always spent three months a year in the villa at Aswan, at the site of her husband’s mausoleum.

As a widow, she travelled widely both for charity and for pleasure. She was dearly loved by her people because of her generosity to the poor, childern, women and the elderly, and, by her own husband as well. She had a big heart for everybody. Also for people outside the Shia Ismaili community. No matter what kind of religion, man or women, or even sexual oriantation, she was véry openminded, Yakymour was an open house.

Every person and every animal should be loved, we are all creations from Allah. When a person is not good for animals, he can not be good to humans’. ‘We should take care of eachother, everybody should be loved!, We are here on earth to do good, and not to harm or judge people, so lets love’….

And that’s what she did! Beauty was not only on the outside. It came from the heart. Highly popular, Her Highness La Bégum showed great generosity throughout her life. She made many donations to schools (‘education is the most impotant thing in life after being loved’ and ‘The highest result of education is tolerance’ she always said) and hospitals. But also donations to women’s shelters, Alzheimer foundation, and… Aids foundation.

For over forty years, banquets were offered to the town’s elderly inhabitants. The Begum also ran a charitable foundation, the Om Habibeh Foundation, which tackled poverty in Aswan, Egypt. At home in Cannes, she established a home for the elderly. It was not in her nature either to forget, or to try to hide, her humble origins. In the last years of her life, she made an outstanding donation to the town, enabling it to renew its school property. Begum Om Habibeh ‘Mata Salamat’ aka Yvette Labrousse died on 1 July 2000, in Le Cannet, near Cannes, at the age of 94 years, and is buried alongside to her beloved husband at the Aga Khan’s sandstone mausoleum in Aswan in whose design she was closely involved.

The family’s historic connections with Egypt go back to the Aga Khan’s ancestor, the Fatimid Caliph-Imam al Mui’zz who founded the city of Cairo in the 10th century.

The Aga Khan Trust for Culture is currently engaged in an extensive range of cultural, social and urban development projects on the edge of the historic city . They encompass: the creation of the 33-hectare Azhar Park that will be the city’s largest green space; community leisure and recreational areas; rehabilitation of the 12th Century Ayyubid Wall; restoration for re-use of selected historic buildings and monuments; and social development projects that include the provision of microfinance and microenterprise support in the Darb al Ahmar district.

The Aga Khan’s visit to Egypt comes at the end of an extensive tour covering Pakistan and the Middle East, including visits to Bahrain and the United Arab Emirates.