A beautiful Cartier ‘La Captive’ Swiss attractive Art Deco silver enamel travel, puse watch in fair condition, owned by Begum Andrée Aga Khan. It is known that Cartier commissiond Tavannes as the maker, considering the succes of the ‘La Captive’ series, commissioned by many other famous boutiques and famous fashion houses. The watch has been manufactured around 1930’s.

The watch has a lovely, nickel finish movement in working condition and a winding mechanism through the crown at twelve. The watch is crown wound and set.

The watch is folding into the lovely opaque enamel decorated case. It is released when the two red enamel inlay side buttons are pressed and turned face down.

The white rectangular dial is in good condition, with minor signs of aging. The dial features black Arabic numerals and blue Breguet hands set, while the crystal is in great condition.

The case opens and closes nicely, the trap door hinges being in good condition. The case enamel shows various signs of wear, cracks, hairlines or chips and other marks from general use and opening, however it remains in a good original condition. 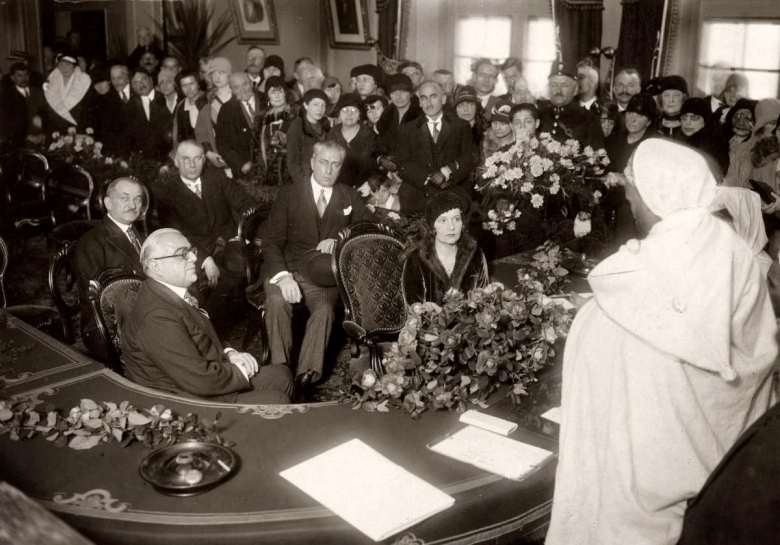 France, Aix-les-Bains, 7 December, 1929. The marriage between  Aga Khan III and Andrée Joséphine Carron, who came from Savoye . The marriage was celebrated by the Mayor, and by an imam. 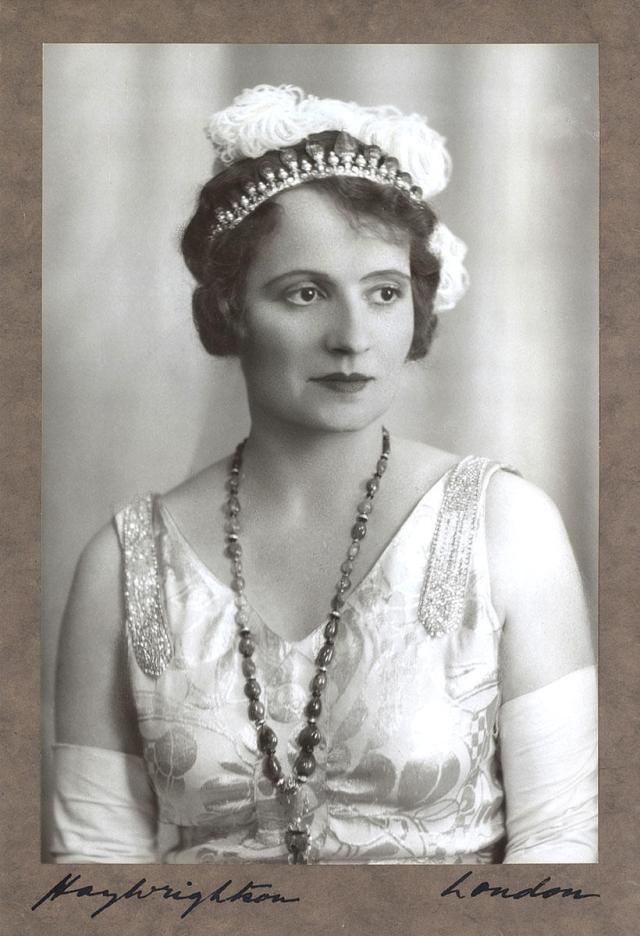 The Princess Andrée, wife of Aga Khan III, wearing her tiara of Emerald with the blade of Sapphire and emeralds (1930) (Click photo to enlarge)

She dressed Edith Piaf, Leslie Caron and Begum Andrée Carron Aga Khan. She created uniforms for more than a dozen airlines and dressed French traffic police. When she launched a fragrance, she provocatively named it Ma Griffe, which can mean either ‘my signature’ or ‘my claw’ in French. She was a force and a character. She was Carmen de Tommaso, or as she was better known in the world of haute couture, Madame Carven. On June 8 Madame Carven passed away at the age of 105, leaving behind an incredible legacy, both in the world of fashion and fragrance.

De Tommaso was introduced to couture by her aunt Josy Boyriven, the last three letters of whose name, ‘ven’, got joined with ‘car’ of Carmen to form Carven –and she started designing both out of fascination and frustration. She was dismayed by the limited choices for petite women and the lack of attention from the fashion masters.

France was learning to dance again after the war and I wanted to be slinky. This desire to be attractive inspired a few reflections

“First I noticed that I wasn’t the only petite woman I knew, and that the grand couturiers weren’t very interested in us. But I had a feeling for proportion and volume. All that remained for me to do was to create, with the help of friends who were scarcely taller than I was, dresses that would allow us to be ourselves. I’d found an opening where there was no competition and a moment when Paris was overflowing with happiness.” 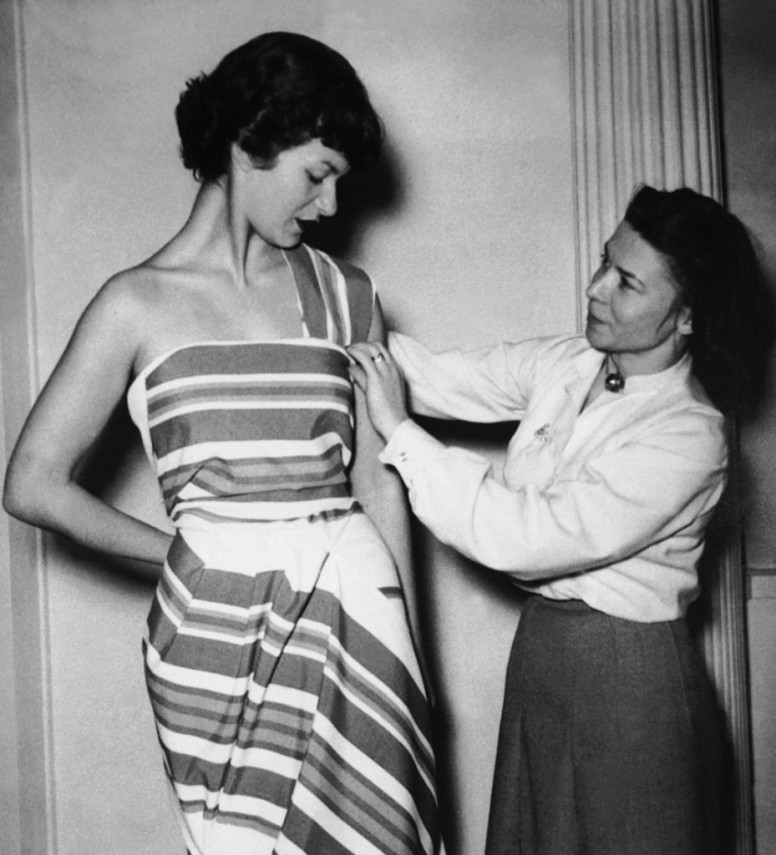 When the Carven fashion house opened its doors in 1945, she rose to fame for her elegant lines and a dose of whimsy. By the time Jacqueline François sang of “les robes de chez Carven” in her 1949 hit, Mademoiselle de Paris, Carven embodied French chic.  In the male-dominated world of fashion, Carven was a breath of fresh air. Her sense of balance and style gave her an edge, while her marketing genius made her a tough competitor. Madras checks, batik prints, African patterns, raffia embroideries and Aztec-inspired motifs featured on outfits bearing names such as Amphora, Ivory Coast, Chiquita and Opium, the latter shown in 1964, more than a decade before the Yves Saint Laurent fragrance of the same name.

Equally groundbreaking was her signature fragrance. Let’s consider for a moment today’s “youthful offerings”, all cute and sweet, and hard to tell apart. Carven dreamed up Ma Griffe for a young woman, but she also wanted it to dazzle and to project confidence. The perfumer up for the task was none other than Jean Carles, already famous in the 40s for his sophisticated compositions and impeccable craftsmanship.

Carles and Carven pinned gardenias on a velvety backdrop of moss and somber woods. They gave Ma Griffe a bold character, but the fragrance is put together as intricately as a Byzantine mosaic– notes like ylang-ylang, iris, jasmine, rose, sandalwood, and benzoin are set into a delicate arrangement and polished till they fade into each other. You notice the details only if you pay close attention and smell like a sleuth. I recommend just to douse yourself in Ma Griffe, shiver as the shimmer of aldehydes and green leaves brightens up the richness of white flowers and reflect on the life of a designer who brought it to life. Goodbye, Madame Carven.

Charles Kiffer grew up in an artistic environment. His father had as a tailor, many famous artists as customer. His mother was a piano teacher. As a child he made drawings and caricatures of the friends and acquaintances of his parents. In 1918, Kiffer admitted to the École Supérieure des Beaux Artes, where he focused on painting. A drawing he made of Maurice Chevalier went so well, that he was commissioned to create posters for his shows. Kiffer was apart from painter and designer of posters also an accomplished graphic artist. From 1929 he produced his own lithographs.

Maurice Chevalier continued to remain faithful to him, and gave him his ’till the 1960’s commands for posters. Also many other greats knew where to find Kiffer, Brigit Bardot, Edith Piaf, Yves Montand, George Guétary, Charles Trenet, Josephine Baker, Andrée Joséphine Carron Aga Khan, Begum Om Habibeh Aga Khan, Gilbert Bécaud and Marcel Marceau – There was almost no French celebrity who does not accept to be immortalized by Charles Kiffer, during his long life. Charles Kiffer died on 20 January 1992 in Paris.