Britisch carmaker Aston Martin announced its plans to bring back the iconic DB4 GT Zagato last fall as part of a continuation series to celebrate the 100 year anniversary of the Italian carrozzeria Zagato. The project began at the manufacturer’s Heritage Division at its Newport Pagnell facility and now the first body has been revealed.

The Heritage Division, is the largest, best equipped and most knowledgeable Aston Martin restoration centre in the world, the invaluable and highly specialist skills nurtured at Aston Martin Works are perfectly suited to the brand’s celebrated Continuation projects.

Built to race against the might of Ferrari in the 1960’s, the DB4 GT Zagato was a thoroughbred machine. Evolved for the rigours of motor racing and blessed with a rare and incontestable beauty, just 19 were built. Drawing on the unrivalled knowledge and expertise of the team at Aston Martin Works the 2019 DB4 GT Zagato Continuations are to be meticulously crafted, staying true to those original Zagato-bodied DB4 GTs produced by Aston Martin and Zagato in the 1960’s.

We are bringing all of our hand-craftsmanship and expertise to bear in building these nineteen Continuation cars, sympathetically incorporating the very latest engineering advancements and performance enhancements, but remaining true to the purity and authenticity of the original design.

Each of the 19 DB4 GT Zagato Continuation cars is being built at Aston Martin Works to the highest possible quality using a blend of Sir David Brown-era old world craftsmanship, with the sympathetic application of modern engineering advancements and performance enhancements.

Beneath the Continuation cars’ bonnet will sit a version of the celebrated Tadek Marek-designed straight-six cylinder engine with two spark plugs per cylinder, transmitting its circa 380 bhp to the rear wheels through a four-speed manual transmission and limited-slip differential, for an authentic and unforgettable driving experience.

This latest continuation car follows the success of the 25 DB4 GT Continuation models that sold to enthusiast collectors in 2017, and precedes what will perhaps be the most ambitious continuation to date: the Aston Martin DB5 Goldfinger Edition cars that will come to market in 2020.

The Aston Martin DBZ Century Collection will be priced at £6m plus taxes. First deliveries to customers will commence in the third quarter of this year with the DB4 GT Zagato Continuation and in fourth quarter 2020 for the DBS GT Zagato.

Come into the beautiful world of Aston Martin.

Iconic British carmaker Aston Martin will unveil a new stunning V12 Vantage Zagato endurance racer on the shores of Lake Como, Italy at the Villa d’Este Concours on May 21, 2011.

Reviving a collaboration which has produced some of the most beautiful and sought-after cars in the world, the partnership takes inspiration from the past, to create a modern descendent of classics such as the DB4GT Zagato, V8 Vantage Zagato and DB7 Zagato based on Aston Martin’s ultimate performance interpretation of the Vantage range: the V12 Vantage.

The Zagato design language is a perfect complement to our design and engineering expertise. After 50 years of the two companies being associated with each other the partnership has produced some of the world’s most iconic cars. Of course, fifty years ago Italian design house ago Italin design houses were widely seen as leading the way with new designs but now and supported by our independency, Aston Martin has its own in-house design ability so this new venture with Zagato is more collaborative than it perheps would have been in the past.

The task for us has been to create a concept that is a natural successor to those iconic cars that have gone before. Matching the technology of the age with the traditional skills vital to deliver such a bespoke and exclusive sports car will lead to a strictly limited run of road going V12 Vantage Zagato’s. 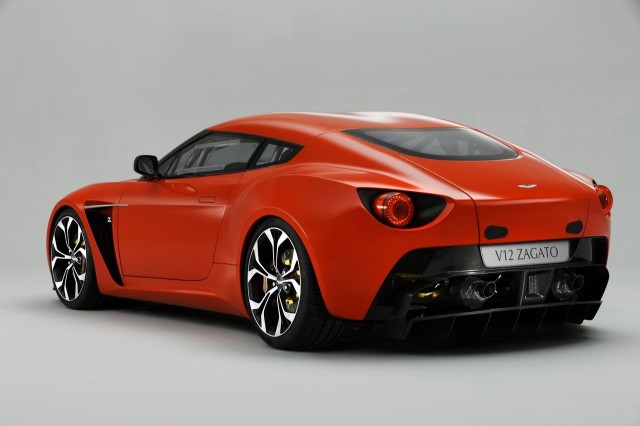 Work began in 2010 with initial meetings between Aston Martin and Zagato where sketches incorporating the design DNA of both companies were discussed and a decision was made to proceed with the project.

Director of Design, Marek Reichman added: “The Design team at Gaydon spent time refining the concept using a mixture of the latest computer based modelling techniques along with crafting traditional clay models to give a real world idea of proportion, stance and detail. The V12 Vantage Zagato is an elegant yet brutal design which reflects the great balance between race performance and pure Aston Martin style. The original DB4GT Zagato was a true icon, powerful and graceful; the new design is a true representation of the spirit of DB4GT Zagato. The muscular organic forms define the thoroughbred nature of the car’s racing credentials”. 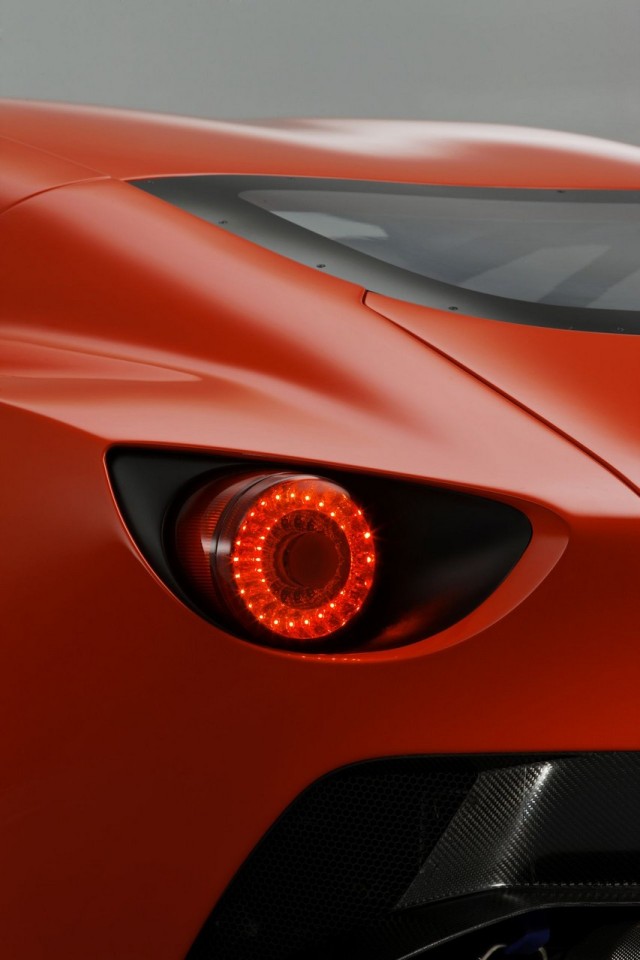 Working alongside the initial design team was a dedicated group of Aston Martin engineers led by Chris Porritt – previously responsible for the engineering of the One-77. With the skills and knowledge gained from such specialised projects this team has worked to bring the unique design of the V12 Vantage Zagato to reality in a very short period of time.

Featuring a new handcrafted aluminium body, the V12 Vantage Zagato delivers a beautiful and muscular design not possible using pre-formed panel techniques. Using the influences and skill of nearly 100 years of heritage in the craft, every aluminium panel was formed using an English wheel and traditionally crafted body bucks. Each front wing alone comprises seven separate pieces of aluminium, combined and then hand finished to give one flowing form. Another iconic Zagato design cue is the double bubble roof created in this case from five separate pieces illustrating further the intensity of craftsmanship involved in the construction of the V12 Vantage Zagato. 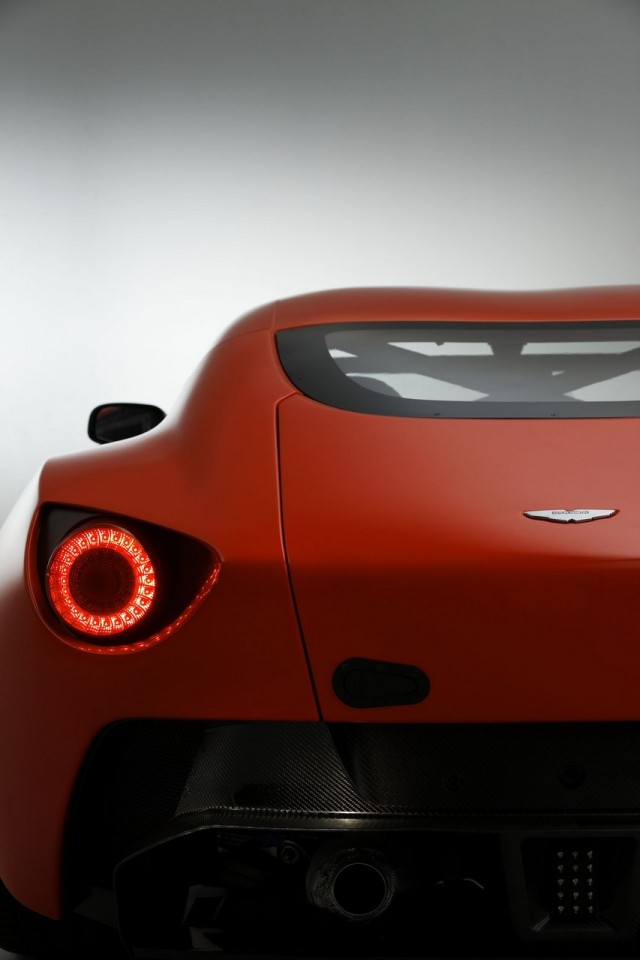 Designed for the focused driver, the V12 Vantage Zagato has been honed with pure driving enjoyment in mind. The V12 Vantage Zagato combines Aston Martin’s most dynamic bonded aluminium platform with the power of the 6.0-litre V12 engine producing 510 bhp (380 kW / 517 PS), and 570 Nm (420 lb ft) of torque.

The V12 Vantage which forms the basis of the V12 Vantage Zagato has been proven on the race track as early as 2009 with a class win in its debut race at the 24 hour race at Nürburgring whilst being close to production standard with only essential safety modifications, reduced weight and re-tuned suspension but no additional aerodynamic enhancements. In 2011 the car has gone on to form the basis of the new Aston Martin GT3 race car unveiled last month. 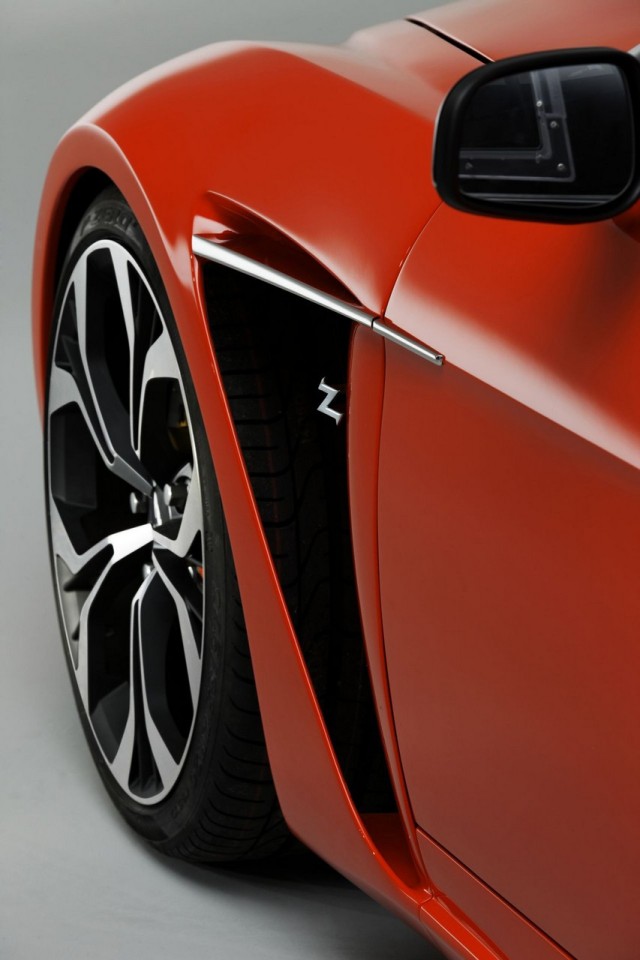 The first DB4GT Zagato shown to the public in late 1960 spent much of its life as a racing car after launch. Later perhaps the two most famous DB4GT Zagatos, registered ‘1 VEV’ and ‘2 VEV’ were raced with success by such names as Jim Clark and Roy Salvadori. The fascinating story of these cars and the nature of high performance and low weight which drove the Zagato projects gave the inspiration for the first two V12 Zagatos to be created as endurance race cars.

The racing debut of the V12 Zagato will be at the four hour VLN race at Nürburgring on 28th May with a view to two cars racing at the 24 hour race on 25/26 June. The cars will be driven by a team with great experience of Aston Martin race cars, led for the sixth year by Chief Executive Dr. Ulrich Bez.

The Aston Martin V12 Vantage Zagato will be shown for the first time at the Villa d’Este Concours on Saturday 21st May 2011. Come into the beautiful worlds of Aston Martin en Zagato.