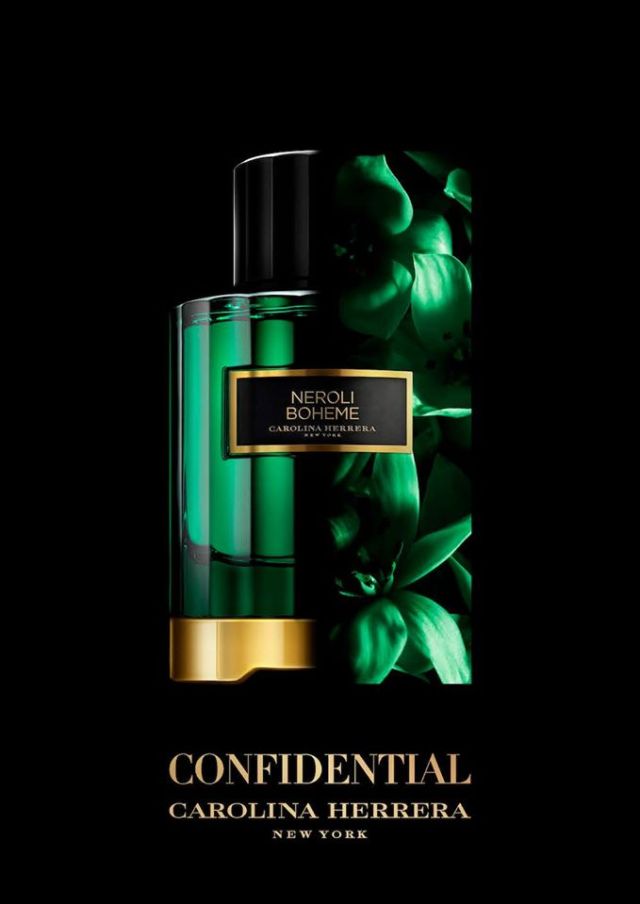 On a captivating, luxurious fragrant journey, Carolina Herrera is given the opportunity to uncover the evocative and enigmatic memories that have inspired each of the scents in her Herrera Confidential collection.

A combination of elegance, authenticity and luxury, Herrera Confidential is housed in seven exquisite bottles, embellished with bold jewel tones, featuring the most iconic scents of modern perfumery. 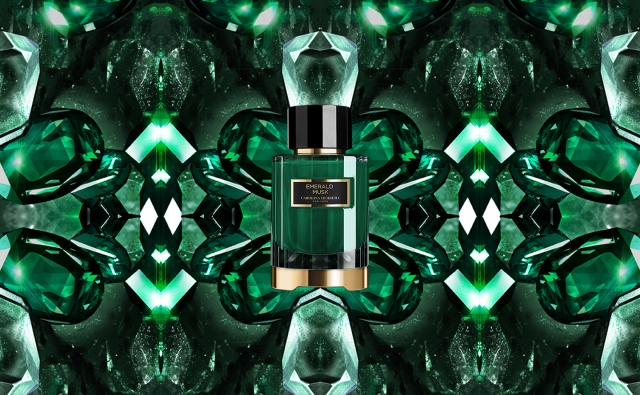 Early this summer, American fashion house Carolina Herrera introduced the fragrance Sandal Ruby, which belongs to the Herrera Confidential collection, inspired by and dedicated to precious rubies. Now, we’re switching our attention to another new edition, launched exclusively in Harrods, this time dedicated to the precious emerald.

The newest, unique Herrera edition is named Emerald Musk, a decadent fragrance enriched with a noble heritage and legacy. Emerald Musk is a scent that – like the regal green stone – is continually reborn with each person who wears it. A noble jewel, the Emerald represents purity in legacy; a majestic stone worn by over four generations of the Herrera family.

The unisex fragrance is a true jewel for collectors, since it is available exclusively at the British store Harrods. A true collector’s item, the multifaceted bejewelled green flacon houses within it a fragrance inspired by the beauty of family legacy and expressed through the artform of Middle Eastern perfumery, with highly concentrated oils that exude notes of pink pepper, rose, leather, musk and amber for a decadent aroma.

A calming base of musk lauds vanilla bean and the violet essence of orris as they are reborn in the midst of Emerald Musk, creating a decadent yet uplifting jewel-like fragrance. The royal character of the emerald stone is captured in this unique scent, powerful yet balanced, like the opulent green jewel it represents.

Carolina Herrera Emerald Musk is available as a 100ml Eau de Parfum priced at £235.00 exclusive at Harrods. Come into the beautiful world of Carolina Herrera.

Carolina Herrera de Baez presents new versions of the original fragrances CH from 2007 and CH Men from 2009. CH Carolina Herrera gets new packaging in bright red and golden details, while the CH Men Prive is a brand new composition.

Carolina Herrera teams up as a dynamic duo with Mario Testino, to create the new CH Carolina Herrera fragrance campaign. As the  world’s leading fashion photographer Testino,  shoots  the new brand campaign of Carolina Herrera, overarching fashion, fragrances and accessories. His keen eye and unique take on the fashion world is evident in every shot he does. The duo worked closely together on the creative of the new fragrance, where throughout the process of creation to see their vision come to fruition – “A story of seduction”.

With  his  master’s  eye,  Mario  Testino  captures  the  successful  couple  in  their  glamorous world, represented by the two international established models Justice Joslin and Lily Aldridge. Justice Joslin is the perfect seducer, impossible to resist. Lily is the woman who has everything, effortless  elegance and innate confidence. Together  they find each other and discover  the true essence  of  life. Two  lives are now  one. Red  and black: passion  and elegance, an impeccable style  and sense  for  luxury. The  two  complement each other perfectly and represent the values of the brand in every shot.

The spot  of the campaign was shot  in New York City by the brilliant Peter  Glanz, whose impressive talent with the camera enabled to capture the essence of the art of seduction the best way possible. 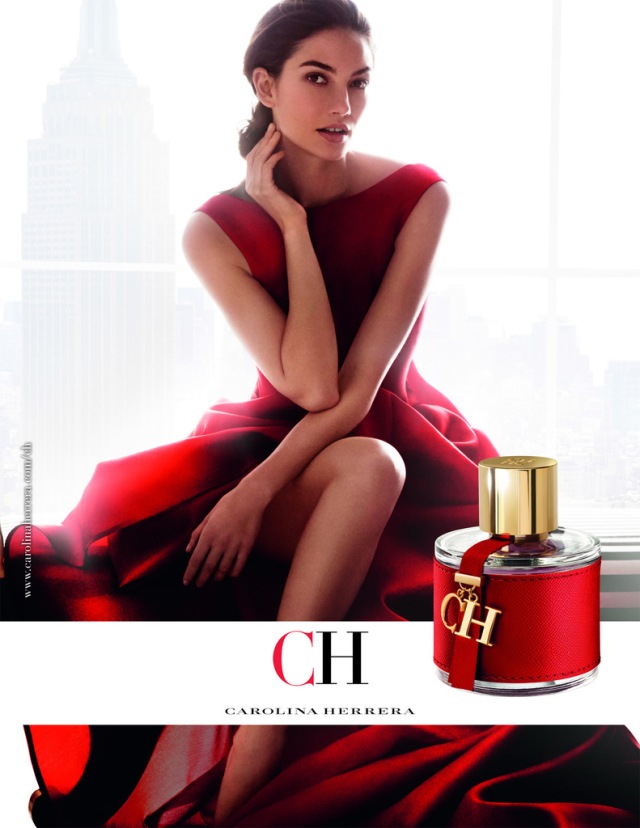 CH Carolina Herrera is a fragrance that belongs to a self-confident, modern woman, the one that you can imagine living on the Upper East Side in New York City. It opens with accords of grapefruit, bergamot and lemon. Rose, jasmine and orange blossom in the heart of the perfume are complemented by the base of cedar, patchouli and praline, with traces of sandalwood, leather and musk.

CH Men Privé, is the new oriental-woody, leather and masculine fragrance to the CH Carolina Herrera family. It is warm and luxurious  with  notes  of whiskey  with intense and sensual black leather, modern and rich. It opens with accords of grapefruit, pomelo and whiskey that lead to the heart of frozen lavender, sage, red thyme and cardamom. The base notes are leather, tonka bean and benzoin. With its polished black lacquered bottle, the sleek look of CH Men Privé was inspired  by a handsome and classic  flask.  Provocative  hints of gold add elegance, making the bottle a powerful statement of sophistication and masculinity. CH Men Privé perfectly embodies the Carolina Herrera man who is ready to imbue passion into everything he does. 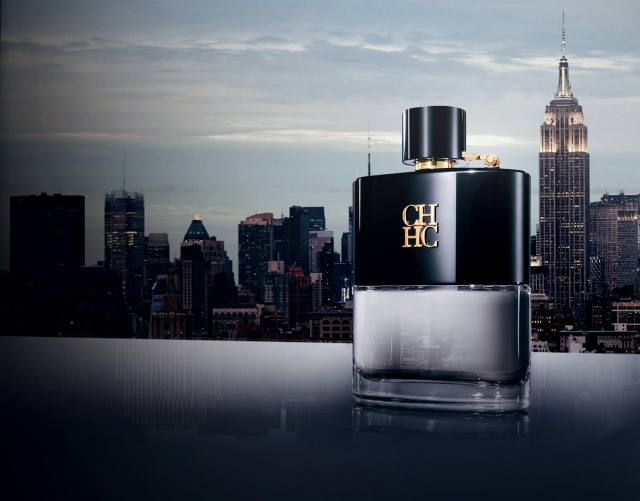 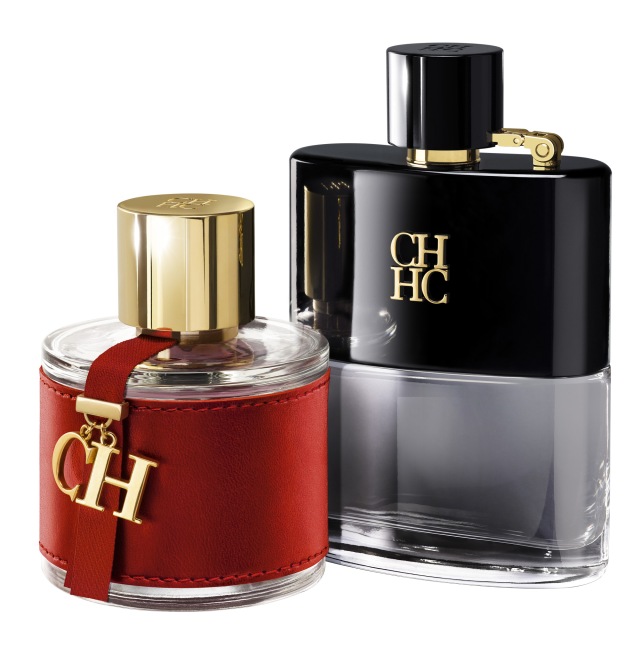 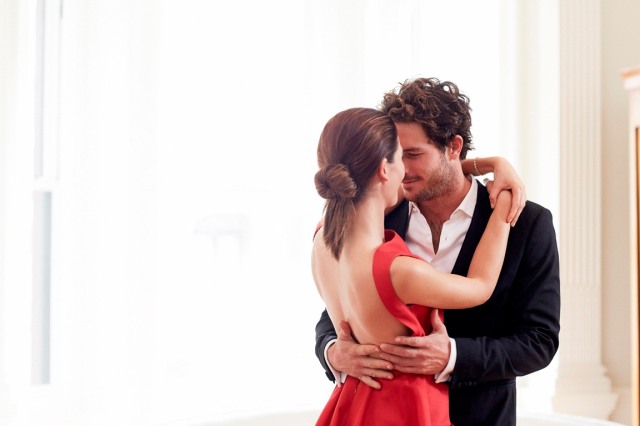 Born and raised in Venezuela, Carolina Herrera was exposed from early on to international culture and fashion. As she elegantly puts it: “My eye was accustomed to see beautiful things”.

I have a responsibility to the woman of today – to make her feel confident, modern and above all else beautiful.

A ‘true’ fashion house is only complete when it has its own fragrance. Carolina Herrera launches her first fragrance in 1988, and three years later she launched her first men’s fragrance, Carolina Herrera for Men. A fresh, masculine Eau de Toilette with tremendous character, imbued with charm and elegance. In 1996 Carolina Herrera De Baez joins as creative director at Herrera’s House of Fragrances, and created some very beautiful fragrances. 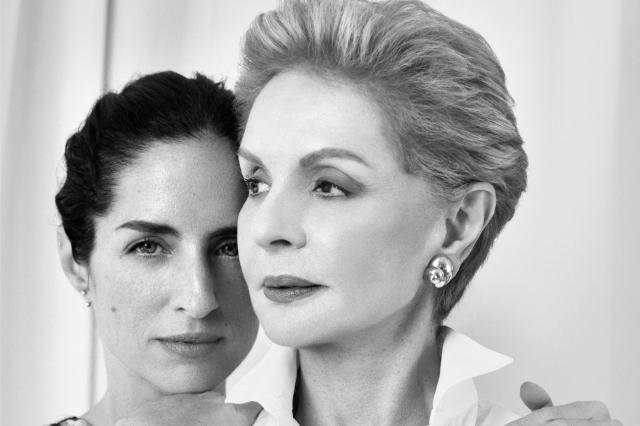 The mother and daughter team of Carolina Herrera together created an exclusive collection of six fragrances for a man or a woman, designed to capture the essance of the House of Herrera. The collection of bottles, the most iconic and natural ingredients of modern and classic perfumery with refined sesibility.

Herrera Confidential effortlessly challanfges both contemporay and traditional values, always staying true to the Herrera ethos: incorporating the most luxurious fragrances pushing scents to the limit and daring to explore the unexpected. 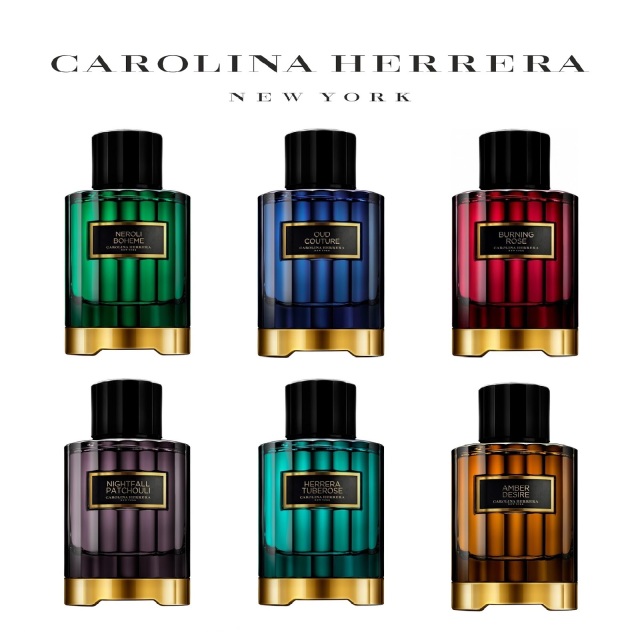 Whimsical Spirit. This passionate fragrance pays homage to whimsical and carefree days spent at carolina herrera’s venezuelan family estate, le vega – a rich and verdant setting where elegance and relaxed style effortlessly harmonized. La vega played host to close friends and family from around the globe to enjoy lavish parties and intimate gatherings. The lush emerald gardens, vivid sunsets and breathtaking landscap created the backdrop to indelible memories of a distinct time and place where every sense was captivated. Here the neroli is bohemian, playful and sensual – a chiaroscuro composition of italian citrus fruits for bright freshness, nightfall indian jasmine for depth. 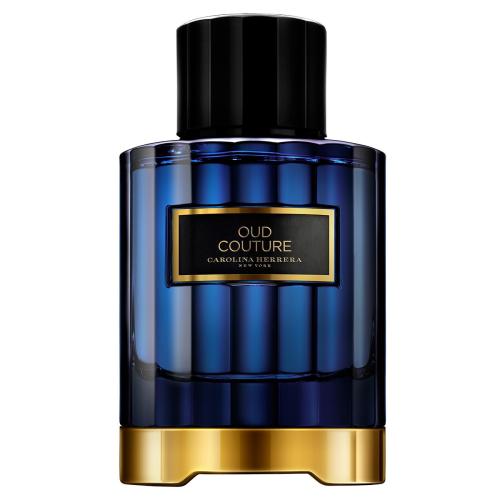 Extracted from agarwood, thought to be the most precious of all woods, Oud Couture draws inspiration from Middle Eastern culture with a modern twist of New York’s cosmopolitan spirit and style sensibility. This seductive scent is a new interpretation of a legendary oriental ingredient. Ingredients: The hallmark of this emblematic fragrance is the scent of Laos oud. A blend of opulent resins and Taif and Damascena roses, oud is transformed into an inspiring and electrifying scent. Just like in New York, a world of endless possibilities.

Grace Under Fire. Red symbolizes passion and love, but it also has a deeper meaning: it is the colour of celebration, an explosion of energy and vitality. Burning rose evokes nostalgia of a creative and revolutionary moment in new york city’s 70s and 80s history, when conventions were challenged in favour of bold new ideas and pop culture. Burning rose embodies the star qualities of charisma, elegance and glamour. This elegant rose from bulgaria is infused with the highest quality spices: royal cinnamon from laos, and ginger burned with patchouli from Indonesia. 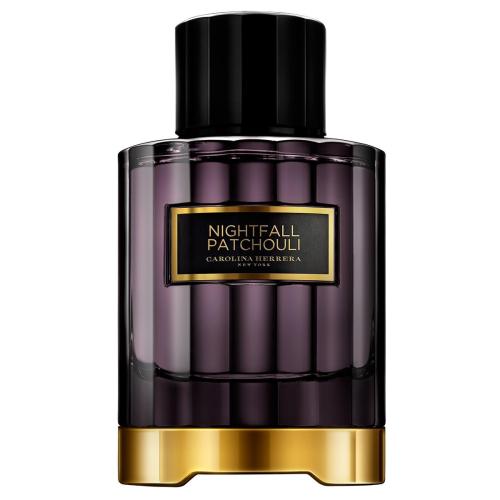 This fragrance was inspired by the magic and mystery of the night, from enchanted evenings in the Arabian Desert to the vibrant energy of New York after dark. Nightfall is the time when anything can happen, opening up the imaginary, an infinite world of possibilities between reality and fantasy. Ingredients: What sets this scent apart is its unique blend of contrasting resins and spices. The deep softness of benzoin resin meets the vibrancy of forbidden cinnamon, with an enigmatic hint of Indonesian patchouli leaves. It’s a celebration of those who dare to see things differently. 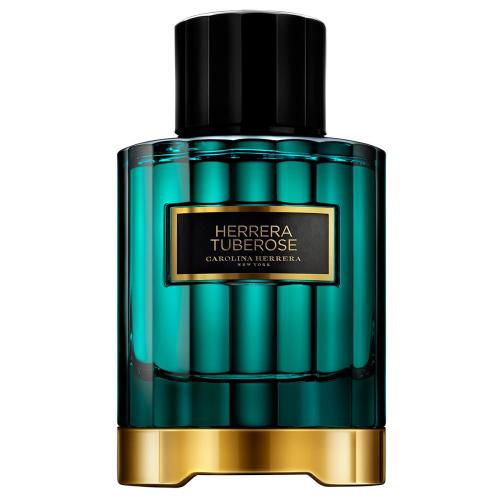 A Timeless Obsession. The story of amber desire started with ambre 83, an emblematic and elementary perfume base created at the turn of the 20th century that became part of classic oriental fragrance structures. Today, the herrera house has reinvented this iconic base giving it a modern twist with an intoxicating fusion of date, rose absolute, vanilla and labdanum. The result, a purer, brighter and more powerful interpretation of a classic perfume note. Traditional yet innovative. Timeless yet modern.

Join Carolina Herrera de Baez on this most exclusive journey to the heritage of the House of Herrera. This distinctive collection consists of six fragrances and four essential oils, to be used individually or to be mixed with each other, presented in handcrafted bottles in bold jewel tones. The epitome of luxury and style.

Six great and original scents, beautiful bottled. But an other reason that makes these fragrances (vèry) special, is that you can use them in layers. The collection also include four essential precious oils which can be layered with the six fragrances. Inspired by the classic inkwell, noted as a symbol of creativity, each bottle in bold jewel tones, is hands crafted with impeccable detail and elegantly designed. 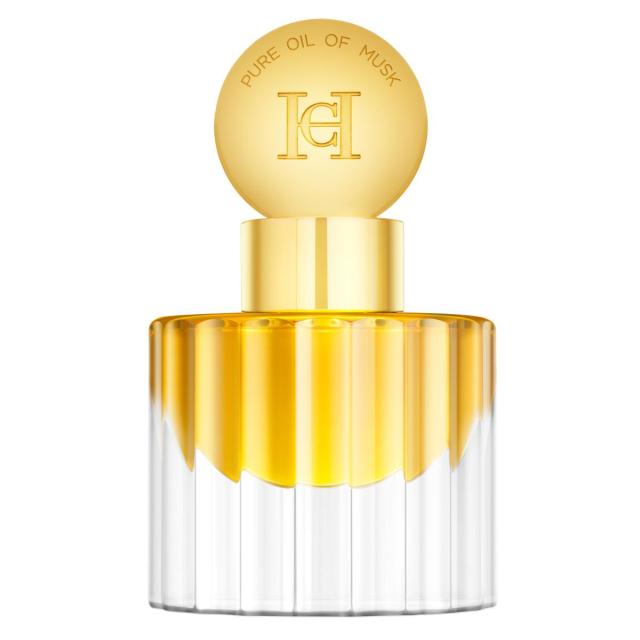 Musk is a synthetic molecule known for its soft sensuality and it’s enveloping, reassuring properties. Extremely concentrated, Pure Oil of Musk adds mystery and softness to the floral notes of the collection. The House of Herrera recommends layering Pure Oil of Musk with Neroli Boheme, Burning Rose and Herrera Tuberose. 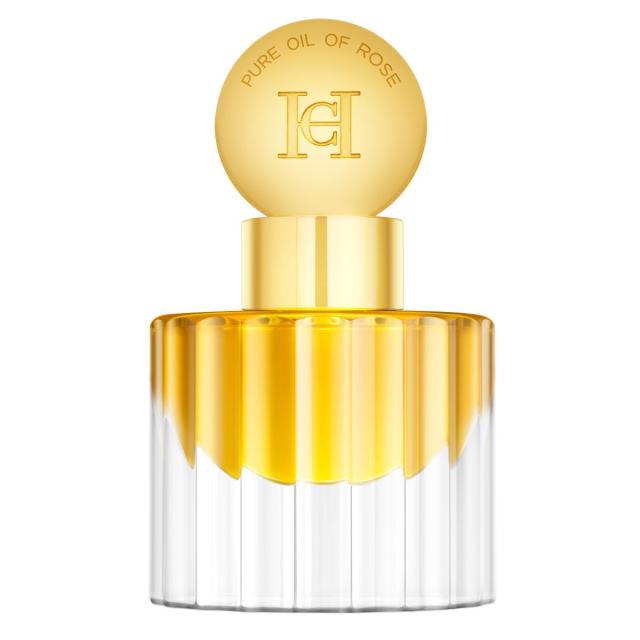 Pure Oil of Rose is concocted from the richest Damascene rose of Bulgaria. Pure and concentrated, it adds an elegant and hypnotizing personality to the fragrance collection. The House of Herrera recommends layering Pure Oil of Rose with Nightfall Patchouli, Amber Desire and Oud Couture.

Pure Oil of Oud is a true treasuse, a rare and precious ingrediënt that embodies the noble character and strenght of the collection. Fashion house Herrera recommends layering Pure Oil of Oud with Burning Rose, Amber Desire and Oud Couture.

For more information, come into the wonderful world of Carolina Herrera.