Hemingway Whiskey Company today announced the launch of Hemingway Rye Whiskey First Edition with the release of the inaugural 972 bottles. This initial offering is a blend of straight rye whiskeys finished in ultra-premium rum seasoned Oloroso Sherry casks. Inspired by American author, journalist, and storyteller Ernest Hemingway, it was crafted by the Calls, a family with Bardstown roots and more than 230 years of distilling experience.

Hemingway Rye Whiskey was founded by a team with deep experience in Kentucky whiskey. It is led by Steve Groth, whiskey pioneer and co-founder of the revered Angel’s Envy Bourbon brand. The Call family, Seventh-Generation Master Distiller Ron Call and his sons, Clayton Call and Eighth-Generation Master Distiller Jacob Call hand source, blend, and finish the rye whiskey, building on generations of distilling expertise and innovation.

The first offering is Hemingway Rye Whiskey First Edition, a captivating blend of 96% 9-year-old Indiana Straight Rye and 4% 4-year-old Kentucky Straight Rye, the latter distilled by Jacob Call and crafted with his signature spice. Both are finished with the sweetness and softness of Ron Call’s own rum-seasoned Oloroso Sherry casks. It is 100 proof and a dark amber color. It has a rich caramel and brown sugar aroma, complemented by back notes of soft rye and vanilla. On the palate, it has notes of rich cherry, toasted oak, creamy caramel, and cinnamon. A rich mouthfeel bursts with fruit flavor leading into a soft, sweet, and warm finish.

The First Edition release of Hemingway Rye debuts today in Collector’s Packaging. With only 972 bottles, it is ready to be welcomed by the most discerning whiskey drinkers and worthy destinations. The bottles are hand-numbered and hand-signed by the Calls; each will come encased in a beautifully textured library-style box, which includes a gold foiled Hemingway signature, ‘First Edition’ inscription, and a satin pull ribbon. Each First Edition bottle also features a unique, removable card on the back, inspired by old-fashioned library book cards, inviting imbibers to pour their own stories and log who they share their rye with.

“As an eighth-generation distiller and Kentuckian, I’ve had the chance to work with a variety of whiskey brands throughout my distilling career but having the chance to work with my father and brother on our Hemingway Rye Whiskey has been a dream come true”, said Jacob Call. “Together, we have poured our hearts into this first edition blend, and we’re proud to share it”.

The new Hemingway Rye Whiskey brand is inspired by rich storytelling and the lessons and traditions passed down from generation to generation. Ernest Hemingway lived a life full of tales worth telling and the same is true for the Calls. Growing up in Kentucky, the Call family shares a similar passion for storytelling and tradition. Ron, Jacob, and Clayton make it a priority to sit down together while enjoying the fruits of their labor to share stories and lessons learned. Hemingway in his own right, loved his whiskey. He didn’t drink while he wrote, he drank after the writing was done for the day.  He said it helped him, “change his ideas”. Indeed, he wrote, “When you work hard all day with your head and you must work again the next day, what else can change your ideas and make them run on a different plane like whiskey?”

“With Hemingway as inspiration, the Call family has authored a new whiskey masterpiece”, said Steve Groth, Founder of Hemingway Rye. “It’s an honor to have the Call family and their centuries of whiskey making experience as part of this new offering. With a focus on quality and innovation, the legacy team we have in place has crafted this premium rye whiskey with passion and we can’t wait to get it in the hands of rye whiskey lovers everywhere”.

Availability and Pricing: Hemingway Rye Whiskey First Edition will be available for pre-purchase online only at a suggested retail price of $149.99 for a 750ml signed Collector’s Bottle, shipping to most states. Rye lovers and holiday gift givers should move quickly to secure one of the 972 First Edition bottles, expected to ship in early December.

Hemingway Rye Whiskey is a new premium rye whiskey brand, from the new Hemingway Whiskey Company, and is inspired by American Author, Journalist and Storyteller Ernest Hemingway. It was founded by a team with deep roots in Kentucky whiskey, led by Steve Groth, whiskey pioneer and co-founder of the revered Angel’s Envy Bourbon brand and the Calls, Ron, Jacob and Clayton, a distilling family with more than 230 years of whiskey making experience. The Hemingway Whiskey Company is part of Old Man and the Sea Brands®, an innovative spirits company that owns Hemingway Rum Company, makers of Papa’s Pilar Rum. They are known for bringing high quality spirits and incredible stories to drinkers around the country.

Come into the beautiful world of Hemingway Rye.

The façade of the Ritz hotel in Paris. Image: Vincent Leroux.

When it comes to Europe’s grand-dame hotels, none are quite as iconic as the Ritz Paris. The Ritz Paris has been synonymous with refined luxury and timeless glamour for over 100 years. Opened in 1898 by Swiss entrepreneur Cesar Ritz the Ritz has served as the backdrop to several key moments in French history. The Nazis requisitioned it during World War II but had cleared out by the time Ernest Hemingway burst in with a group of Resistance fighters on August 25, 1944, gun in hand, to ‘personally liberate’ it. Realising he was too late Hemingway took to the bar where he is said to have run up a tab for 51 dry Martinis. In 1997, tragedy befell the hotel when Britain’s Princess Diana, who had been staying there, was killed in a car accident in a Paris tunnel while being pursued by paparazzi. The hotel made global headlines again in January, when robbers armed with guns and hatchets ransacked jewellery shops on the ground floor, making off with over four million euros ($4.9 million) in gems and watches.

The Ritz decided to sell the pieces when it reopened in June 2016 after four years of a fittingly glamorous top-to-bottom renovation. After being closed for over 4 years, the Ritz has long been a favorite of visitors to the City of Light, hosting everyone from Begum Om Habibeh Aga Khan and Gabrielle ‘Coco’ Chanel to the Duke and Duchess of Windsor in its opulent rooms and suites.

Now, the hotel’s fans have a chance to own a piece of Ritz history – 3,500 lots consisting of 10,000 pieces of furniture and decorative objects from the property will be up for auction on the Champs Élysées this April. Organized by Artcurial – the firm that was also behind the sales of historic pieces from pre-renovation Hôtel de Crillon and the Plaza Athénée – the Ritz Paris auction will be held from April 17 through 21.

Price estimates run from 100 euros for a pair of tablecloths to 10,000 euros for a pair of nymph sculptures carrying bronze candelabras that used to decorate the lobby. Each lot in the auction’s extensive catalogue has been meticulously restored, inventoried, and catalogued by a team of 15 experts from Artcurial, who went to great lengths to ensure that every piece bearing the Ritz Paris insignia was returned to its former glory before heading to the auction block.

A cross section of the Ritz Paris’ illustrious history, the auction includes pieces from the property’s 120 years as a hotel. When it was opened by Swiss hotelier César Ritz in 1989, the original décor was meant to entice well-heeled Americans visiting the city, combining elegant art with antiques and replicas of everything from Louis XIV– to Empire-style furniture to create a unique sense of traditional French elegance. The style of 15 Place Vendôme quickly became iconic, and hallmarks like the hotel’s plush red-velvet barstools, salon sofas from French writer Marcel Proust’s retreats at the hotel, the gilt-framed bed that starred alongside Audrey Hepburn and Gary Cooper in their 1957 film ‘Love In The Afternoon’, the first en-suite bathtub ever installed at the property (or in any hotel, for that matter), and ornate marble side tables are all up for loyalists to bid on.

In addition to hallmarks of the Ritz’s style, pieces from suites that some of property’s most famous inhabitants called home will be up for sale. Sure to spark bidding wars are pieces such as a pair of plush floral chesterfield armchairs, a gilded headboard, and sleek lacquered bedside tables from the Coco Chanel Suite. The legendary fashion designer called the hotel her home for more than 30 years – giving testament to both the hotel’s enduring stylishness and its famous homelike feel . . . if home is a Versailles-inspired mansion, of course. 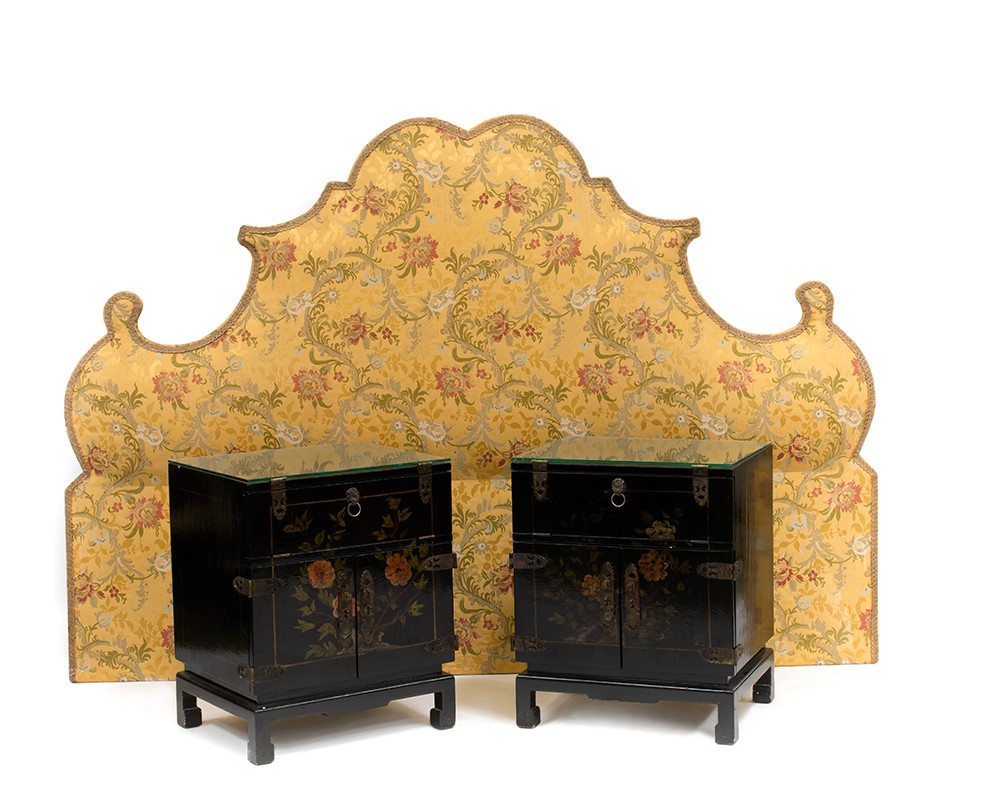 A bedboard and lacquered bedside tables from the Coco Chanel Suite.

Believe it or not, many of the lots aren’t outrageous, either. Bids open at €150 for a pair of gilded lanterns, and €300 for a set of Louis XVI-style banquette. If the over-the-top opulence fits with your own personal aesthetic, then what better way to hold on to a piece of history? One thing’s for sure: there’ll never be another hotel quite like it.

Come into the world of the Ritz Paris.