French Maison Guuerlain is widely regarded as one of the oldest perfume, cosmetics and skincare brands in the world. The House of Guerlain was founded in 1828, when Pierre-François Pascal Guerlain opened his perfume store at 42, rue de Rivoli in Paris. As both the founder and first perfumer of the house, Pierre-François composed and manufactured custom fragrances with the help of his two sons, Aimé and Gabriel. Through continued success and the patronage of members in high society, Guerlain opened its flagship store at 15, rue de la Paix in 1840, and put its mark on the Parisian fashion scene.

Guerlain has been exploring, innovating and enhancing since 1828. In Fragrance, in Skincare and in Make-up. Bold designers, legendary creations, timeless know-how.

The success of the Maison under Pierre-François peaked in 1853 with the creation of Eau de Cologne Impériale for French Emperor Napoleon III and his Spanish-French wife Empress Eugénie, to celebrate her marriage to Emperor Napoleon III. This perfume earned Pierre-François the prestigious title of being His Majesty’s Official Perfumer. As ‘royal suplier’ he decorated the flacon with the bees of the Empire. The ‘Bee’ flacon, which went on to become an icon, was born. Since then, bees have permeated the history of Guerlain. The bee became the symbol of the Maison, inspiring their designs, adorning their most precious flacons, and driving their commitment to sustainable development. 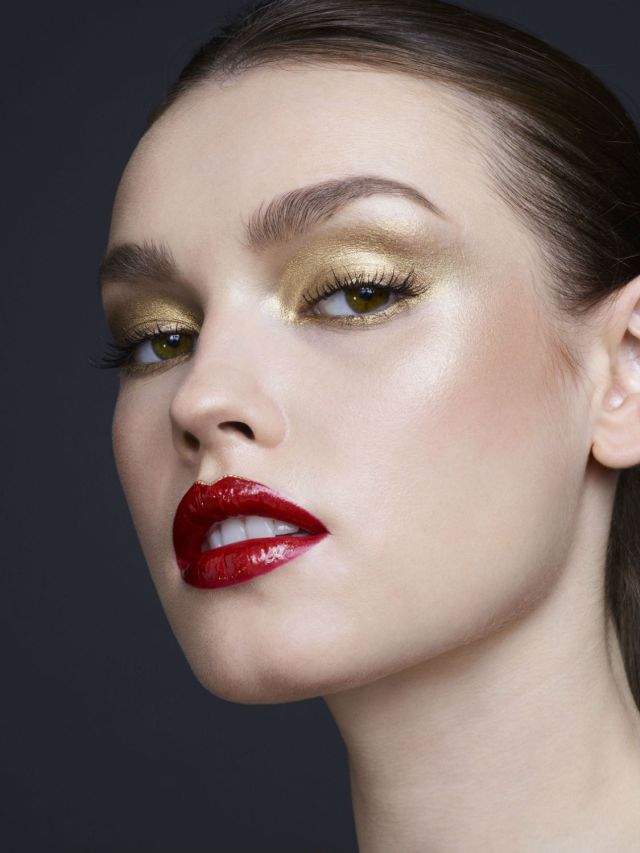 Guerlain went on to create perfumes for Queen Victoria of the United Kingdom and Queen Isabella II of Spain, among other royalty. Today, you don’t have to be royalty to own a piece of Guerlain. this year the iconic upscale brand celebrates its 190th anniversary this year. To mark the occasion, Guerlain has released a beautiful new capsule that not only marks the important milestone, but also arrives just in time for the Holiday season 2018. 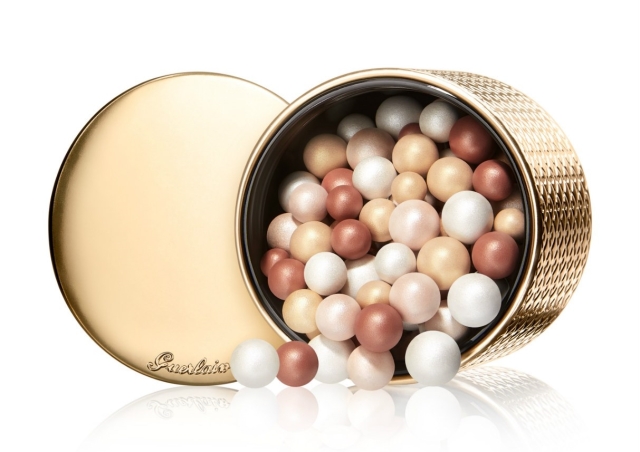 This limited edition offering brings Les Météorites that has been redesigned for Guerlain’s 190th anniversary into a new Limited Edition palette of colours that add radiance and warmth to all the complexions. Météorites Electric Pearl comprises 4 iridescent pearls that harmoniously blend to create a pure, corrective halo of radiance tailored to your complexion.

A subtle harmony of gold and copper pearls counter a dull complexion while champagne and white pearls reflect the light and illuminate the face with a halo of endless radiance. All nestled in a golden anniversary case for the festive season.

Born of expert craftsmanship, the Meteorites hold the secret to Stardust Technology. Diamond powder encapsulated in microspheres that create a brilliant blurring halo. Météorites Electric Pearl comprises 4 iridescent pearls that harmoniously blend to create a pure, corrective halo of radiance tailored to your complexion. A subtle harmony of gold and copper pearls counter a dull complexion while champagne and white pearls reflect the light and illuminate the face with a halo of endless radiance. This extra-soft powder smooths the complexion to create an incomparably soft feeling. Like all Les Météorites: a true Holy Grail.

Using the special Météorites brush, designed to capture just the right amount of powder, evenly apply Météorites Electric Pearl to the entire face, to set your make-up and improve its hold.

For boosted radiance, highlight the curved areas of the face: draw a G from the middle of the forehead to the top of the cheekbones and from the bridge of the nose to the tip of the chin.

Guerlain ‘190th Anniversary’ All Eyes On You Palette 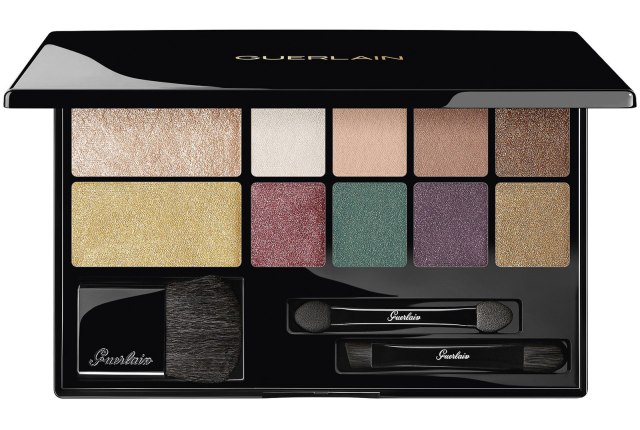 This limited edition collection brings a new All Eyes On You Palette. In its elegant sleek black lacquered compact, this palette blows hot and cold: three applicators, two frosted silver and icy gold highlighters with a creamy powder finish, along with eight shadows that can be used wet or dry to adorn lids in matte and metallic colours. These pearly, shimmer-infused shades allowing you to go anywhere from sheer wash of color to party-ready shine. 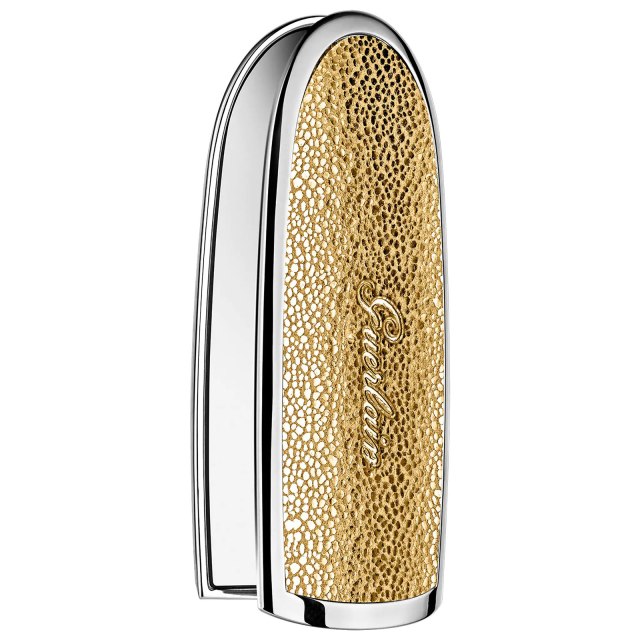 Rouge G’s legendary double-mirror case, designed by the jeweller Lorenz Bäumer, is illuminated in a textured leather with shimmering gold particles. a brand new limited edition design named Gold Electric. The case is compatible with any of the wide range of Rouge G lipstick shades. 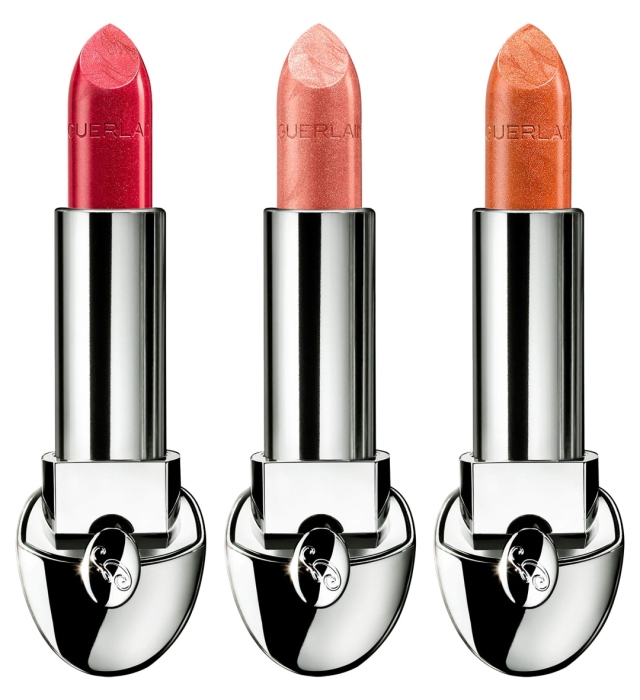 Thanks to the double mirror case, apply directly to lips. The bullet’s ergonomic design allows ultra-precise application for a flawless lip-enhancing result.

Guerlain’s 190th Anniversary Collection is now available at Guerlain boutiques, on the official Guerlain website, and selected stores world wide. Come into the beautiful and wonderful world of Maison Guerlain.