Elie Saab was born in 1964, into a family with no links to fashion. In interviews he told that right from the beginning, ‘he dreamed only of escaping to fantastic faraway lands’. His first dress was created at the age of nine, for a younger sister; he spent all his spare time designing (and I’m not quite sure how his mother must have felt about her son taking his scissors to her curtains and tablecloths…). Word of his talent spread, and by the time he was a teenager, the most elegant women in the area were beating a path to this self-taught designer’s door. Astonishingly, at just 18, Elie Saab opened his own couture house with more than a dozen accomplished seamstresses!

Until he launched his debut fragrance, Elie Saab Le Parfum, this Lebanese designer was a well-kept secret shared by some of the world’s most elegant and best-dressed women: a creator of beautiful, often bejewelled and richly-embroidered couture gowns which often reference his Lebanese background, yet look so perfect on that glamorous red carpet. 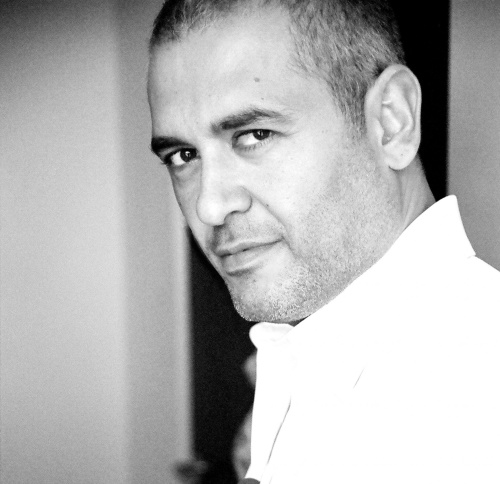 The luxury and detail of Elie Saab‘s designs soon won over the Middle East; today, he is the personal designer for many princesses: Lebanon’s ‘golden boy’, and that team of a dozen seamstresses has grown to over 100, producing between 800 and 1000 made-to-measure gowns. His inspiration might be 1950s Hollywood glamour, or the architecture of Frank Lloyd Wright or Le Corbusier. And his philosophy? ‘I like “womanly women”,’ he explains. ‘Women who twirl their dresses with desire and pride. Ever since my childhood in Lebanon, I’ve examined the way they dress. I’ve always wanted to please them by flattering their curves.’ And his sole ambition, he adds, ‘is to inject beauty into the lives of women.’ Today, he splits his time between the Middle East and Paris, where he was invited by the French Federation of Couture to show his collections on the official calendar.

A secret like Elie Saab can’t be kept for long, of course, and the East-meets-West nature of his gowns have been sought out by women from around the world for those moments when they long to shine and stand out: a wedding, a gala event, an Oscars ceremony… It was Halle Berry who put Elie Saab on the map when she wore a dress to the 2002 Acadamy Awards. Catherine Zeta-Jones, Beyoncé, Dita Von Teese and Christina Aguiliera have all worn his dresses, which are nicknamed the ‘stars’ lucky charm’. For the rest of us, there’s the ready-to-wear and accessories, and his perfumes…

Halle Berry, one of the most beautiful women, wore a rare red diamond bracelet by Harry Winston to match her amazing elegant Elie Saab couture dress.at the Acadamy Awards, 2002 (Click photo to enlarge) 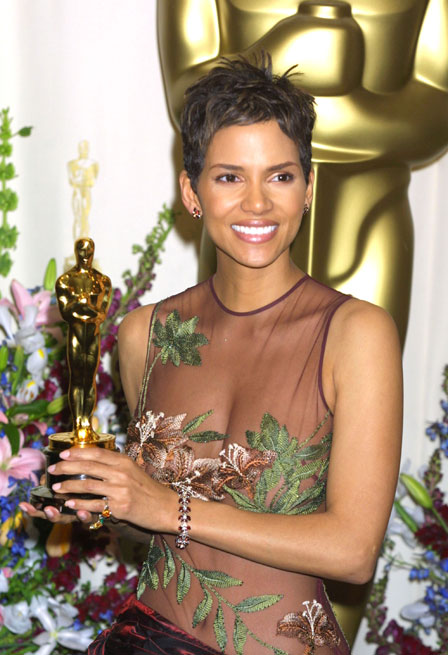 It’s fair to say that nobody quite expected the phenomenal success of this (then) little-known designer’s debut fragrance. It was perfume maestro Francis Kurkdjian who was chosen to interpret the richness of the designer’s work alive with fragrant notes and harmonies. As Francis Kurkdjian comments: ‘What I found fascinating in working for Elie Saab was the idea of interpreting light; I didn’t have any specific images in mind, just sensations: the whiteness of the sun at its zenith, radiant femininity, a modern interpretation of voluptuousness…’ This floral solar woody fragrance was actually created as an ‘ode to light’: armfuls of orange blossom (a memory from Elie Saab‘s Mediterranean childhood), sumptuous absolutes from grandiflorum and sambac jasmine, sensually underpinned by patchouli heart. And in the base, a cedar woody accord, drizzled with rose honey for a touch of sweetness’.

Launched in 2011, in its very first year Elie Saab Le Parfum scooped the coveted ‘Fragrance Foundation Award (FiFi)’ for Best New Fragrance in the UK, the US and France, a phenomenal hat trick. Now it’s been joined by Elie Saab L’Eau Couture, also ‘signed’ by Francis Kurkdjian, in which ‘the green theme is given a delicately gourmand twist, based on the faint whiff of fresh almond from budding orange blossoms, Saab’s signature note’, and with ‘a fresh, radiant vanilla’, in its lingering finale.

Elie Saab is, as Vanity Fair observed, ‘remarkable for his ability to make clothes that make women feel beautiful’. To which we’d add: and now, for making fragrances which make women feel gorgeous, too. And with no time-consuming couture fittings required…

Closer is the name of the new perfume launched by stunning actress Halle Berry. As the name inspires, Halle Berry Closer describes the tight attraction between men and women – who are passionately closer to each other. Closer is provocative, delicious and seductive – a strong weapon in the hands of any woman.

Halle Berry Closer is created by perfumer Jacques Cavallier as an exquisite and unique perfume composed around feminine notes and classical/aromatic masculine fougere accords. This floral/woody perfume opens with accords of ozone, wild raspberry and water lily accompanied by mimosa, violet, cedar and fougere accord. The base indulges with vanilla pod, mahogany, cashmere and musk. 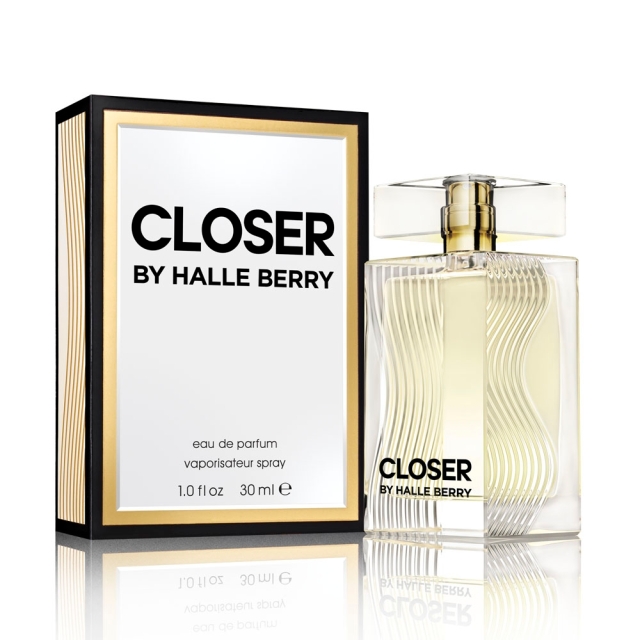 Closer by Halle Berry comes in a crystal bottle decorated with curvy lines representing masculine and feminine silhouettes closer together.

Halle Berry Closer will be available from September 2012 as 15 and 30 ml Eau de Parfum.

Halle Berry Reveal the Passion is a delicate interpretation of sensual woody floral notes like bergamot, freesia, apple along with heart notes of champaca and mangostine, while the delicious desert becomes more desired and seductive with base notes of okume wood, patchouli and musk. 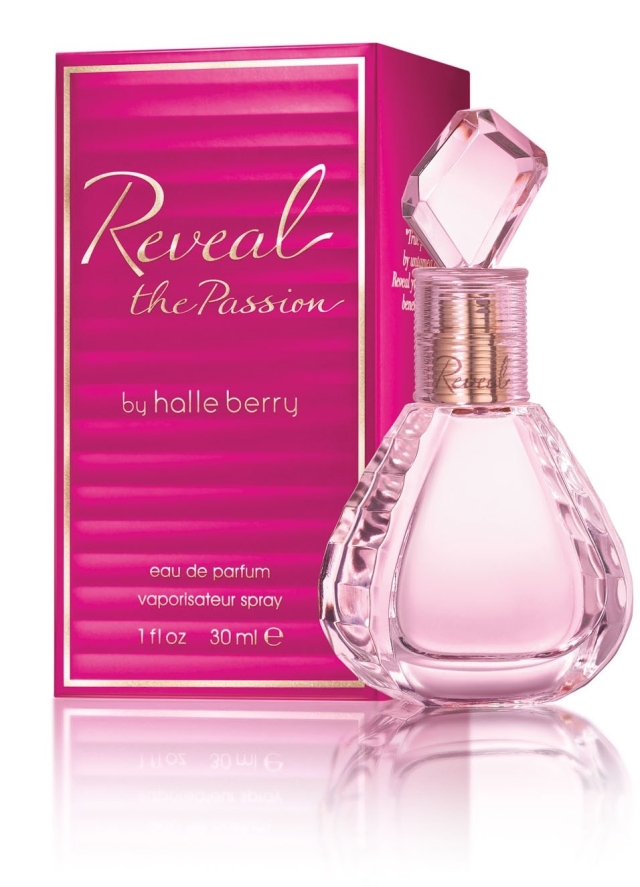 Reveal The Passion Perfume perfectly reflects the sweet and passionate side of stunning Halle Berry. Reveal the Passion comes in a pale violet flacon with a resembling bottle shape and design just like the original fragrance Reveal. Reveal the Passion is available in 15 and 30 ml Eau de Parfum, featuring a 75 ml Deodorant.

Gorgeous and lovely actress Halle Berry launched Reveal, a sweet and lavish fragrance for women. Halle Berry Reveal, as the actress suggests, is another side of Halle Berry.

I wanted to show yet another side of myself…something that was very glamorous yet natural and easy to wear.

Halle Berry’s Reveal is created by famous perfumer Richard Herpin. Reveal perfume for women will be a source of inspiration for shy women, who are afraid to reveal their emotions and passionate feelings for their loved ones.

I wanted this one to be a little more floral, but the inspiration was still about keeping it classic and easy.

Halle Berry Reveal is sealed in an attractive, magnificent bottle with a caramel color flavor and with an appealing look. This bottle will not be unnoticed as it’s tempting to touch. It is a fabulous, feminine yet stylish and modern fragrance for most fascinating women. Halle Berry Reveal is a must have accessory for occasional wear and special days. 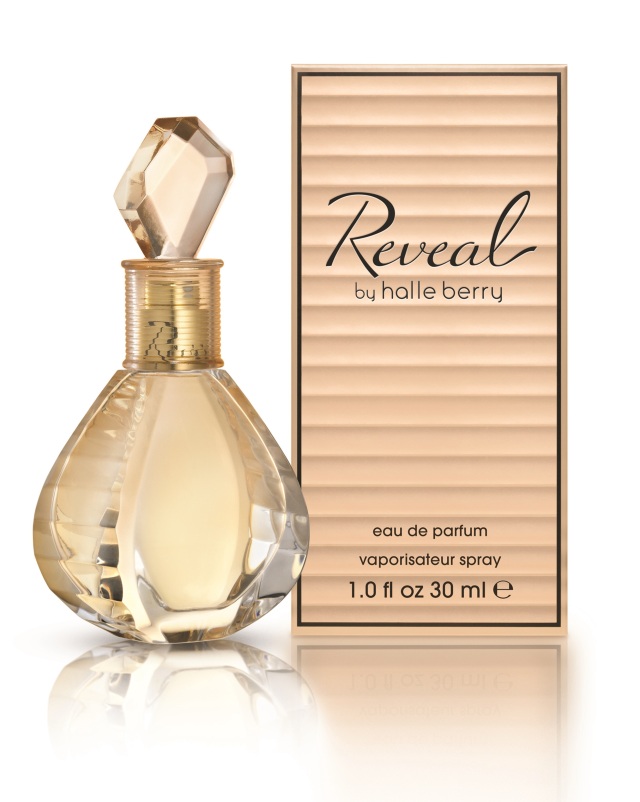