After studyng at the Tournelle Institution in Courgent, then at the Notre-dame de Mantes-la-Jolie Institution in the Yvelines where she got her baccalaureate, Ines de la Fressange began her career as a model in 1974 at the age of 17. She quickly became nicknamed by many as ‘the talking mannequin’, due to her tendency to talk with fashion journalists and express her opinions on her profession and on fashion. In 1975, at the age of 18, La Fressange appeared for the first time in photos by Oliviero Toscani for Elle magazine, then modelled for Thierry Mugler and other designers.

However, in 1989, Lagerfeld and La Fressange had an argument and parted company. Likely this argument was, at least in part, regarding her decision to lend her likeness to a bust of Marianne, the ubiquitous symbol of the French Republic. Lagerfeld reputedly condemned her decision, saying that Marianne was the embodiment of “everything that is boring, bourgeois, and provincial” and that he would not dress up historic monuments.

In 1991, she created her own brand ‘Inès de la Fressange’ and opened her own Boutique, selling various products such as perfumes originating from the area in which her grandfather lived, at 12 Avenue Montaigne in the 8th arrondissement of Paris. It was an immediate international success.

Ines de la Fressange, icon of French style, returns to the perfume scene with two new editions, done in cooperation with the Marionnaud chain. Blanc Chic and Or Choc have been created in close cooperation with the Maison de Parfum IFF and offer an olfactory interpretation of the various aspects of the iconic Parisian that can be combined.

We first feel the sensuality powdery Iris supported vanilla and spicy accents of a bewitching incense and a creamy benzoin in heart. While the essence of Cedar Atlas and the sinfonide come in background who leave behind them a creamy and musky trail.

A bright and tangy, zeste Tangerine, start opens on a very feminine heart where blooms a rose intense and proud. Then invite the Oriental fragrance of incense and sandalwood who swarm their Woody, creamy and spicy notes in the background. 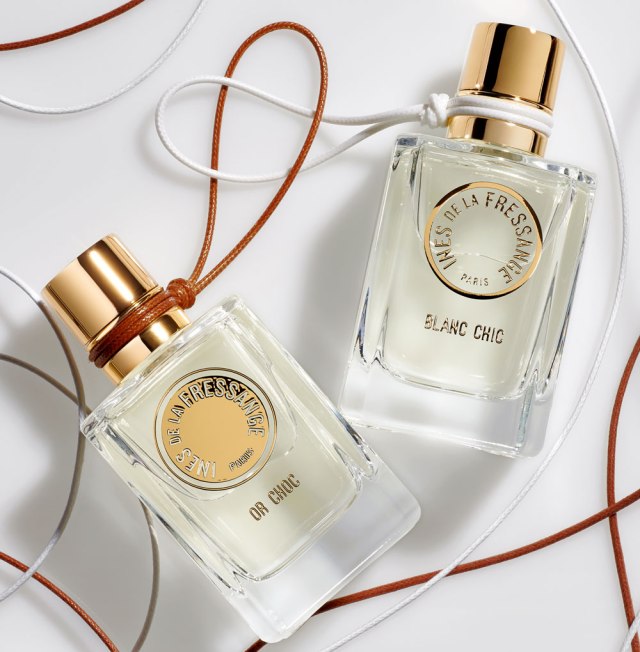