Pomellato and an impressive cast of Hollywood artists, fashion headliners, and diversity activists collaborate for the 3rd annual ‘Pomellato For Women’ video, promoting inclusivity, environmentalism, equality, and our need to act now.

Starring actress and political activist Jane Fonda for the third year in a row, as well as award-winning actress and humanitarian Cate Blanchett, the  2020 Pomellato For Women Godmother.

Speaking in a choral message on their hope for equality and inclusivity, they prompt us to ask ourselves, ‘Who is not in the room?’ Understanding the power of luxury brand visibility, Pomellato uses the Pomellato For Women platform to ignite and promote change, underscoring the Maison’s values of empowerment, environmentalism and inclusivity, as it projects a message of hope.

The Pomellato For Women initiative was first developed in 2017 to highlight the importance of female leadership and a more authentic idea of natural beauty. Founded by a cross-section of women from various disciplines, ages and arts, these ambassadors act as the bearers of Pomellato values. A true woman’s affair, most of Pomellato’s clients are women buying jewels for themselves, thus Pomellato’s workforce is 74% female, and has been headed by CEO Sabina Belli since 2015.

Pomellato was founded by Pino Rabolini in 1967 under the concept of prêt-à-porter jewelry for the liberated woman during an important era for women’s emancipation. Pomellato recognized that the independent woman would need a more functional jewel to wear from workday to evening, and the ready-to-wear jewelry concept was born.

Since, Pomellato has been known as the brand that designs for women, promoting the unity, strength and equality of womenkind. The mission of Pomellato For Women and its ambassadors is to listen, to empower, to promote inclusiveness, and to achieve equality.

In today’s tumultuous social climate, we have a responsibility to do what we can. As head of a luxury brand company designed for women, of course Pomellato will use its forum to call for change and promote inclusivity. We stand in defiance to gender inequality, bigotry, sexism, homophobia, transphobia, xenophobia, to any fear of ‘the other. We  raise our voices loud and our spirits high. We are hopeful for a healthier, more unified, more inclusive future. Pomellato For Women, in the spirit of International Women’s Day, celebrates the achievements of womenkind in its proud pursuit for a better tomorrow.

Watch the new ‘Pomellato For Women’ video below:

Come into the beautuful world of Pomellato.

For the opening night of this retrospective at La Cinémathèque française on October 22 2018, Jane Fonda, first recipient of the Women in Motion Award in 2015, will discuss her life’s work as an actress, producer and engaged philanthropist with Costa-Gavras, President of La Cinémathèque française and Frédéric Bonnaud, its Head. This Talk will be followed by a screening of Klute by Alan J. Pakula (1971), a film that marked a major turning point in her career and in her life.

Jane Fonda is an icon with a very exceptional destiny. Since beginning in the 1960s, she has never stopped reinventing herself. Her unique journey is one of liberation. Her career as an actress, initially marked by the glamor of her first roles, took a decisive turn in 1971 on the set of Klute, a thriller and especially a sublime portrait of a woman. For this film, she exchanged her role as a sexy muse for one with a complex and independent character; the disillusioned call girl as strong as she is moving, far from being a caricature. From this role she drew the premises for her future commitments, and would go on to say that it is this role that inspired her first feminist ideals. Her performance in this film went on to earn her a Golden Globe® and her first Oscar®.

Combative and passionate, Jane Fonda gradually put together her commitment to peace and equality: as a citizen, she became a militant activist. A proud feminist, a symbol of modern and fulfilled femininity, Jane Fonda was the first personality to receive the Women in Motion prize awarded by Kering in partnership with the Cannes Film Festival in 2015.

After receiving the Prix Lumière in Lyon on October 19th, Jane Fonda will honor La Cinémathèque française with her presence during the opening night of her retrospective. Inaugurated by a Women in Motion Talk during which she will discuss with Frédéric Bonnaud and Costa-Gavras, the evening will continue with a screening of Klute.

You know, 73 percent of Americans think we’ve passed it, but we haven’t. We scold Iraq and Iran and Afghanistan for how they treat women, but we don’t even have an Equal Rights Amendment.

Fonda, who is a brand ambassador for L’Oréal Paris, is also campaigning to create more entertainment content for older women, such as her Netflix series ‘Grace and Frankie’, co-starring Lily Tomlin.

Until November 5, filmgoers will have the chance to discover a selection of films depicting the fascinating evolution of this extraordinary actress. The Cinémathèque Française will screen 24 of her movies, including ‘Julia’, ‘Joy House’, ‘Cat Ballou’, ‘They Shoot Horses, Don’t They?’ and ‘A Doll’s House’.

Jane Fonda was born in New York City in 1937. After having graduated from Vassar College, Fonda studied with renowned acting coach Lee Strasberg and became a member of the Actors Studio in New York. Fonda’s work on stage and screen has earned numerous nominations and awards, including Oscars® (Best Actress in 1971 for ‘Klute’ and in 1978 for ‘Coming Home’), four Golden Globes®, two BAFTAs and an Emmy Award. Along with starring roles in dozens of highly acclaimed productions, Fonda also took on responsibilities as a film and television producer. In 2007, Fonda received an Honorary Palme d’Or from the Cannes Film Festival. In 2014, she received American Film Institute’s highest honor, the Life Achievement Award.

In addition to her tremendous success as a stage and screen actress, Fonda has long been known for activism and advocacy on environmental issues, peace, and gender equality. Since 1994, Fonda has been Goodwill Ambassador for the United Nations Population Fund. With much of her work devoted to the program she founded in 1995, the Georgia Campaign for Adolescent Power and Potential (G-CAPP). She is also on the board of a number of NGOs, among them the Women’s Media Center, which she co-founded in 2004, and the Restaurant Opportunities Centers (ROC).

In 1936, Henri Langlois, a visionary figure, founded La Cinémathèque française in order to save films from destruction, along with costumes, sets, posters and other cinematic treasures. At the time, he was the first to consider cinema an art to be preserved, restored and shown.

Eight decades on and more than ever, in a resolutely modern building designed by Frank Gehry and devoted entirely to the 7th Art, La Cinémathèque française reveals cinema in a unique way via its numerous activities and one of the world’s largest film collections.
A veritable crossroads of cinephilia, it constantly takes a new look at cinema across all periods, horizons and genres. It thereby enables spectators to make wonderful film discoveries and the young generation to frequent the history of cinema on a daily basis.

About Women in Motion, a Kering initiative

Women in Motion’s ambition is to highlight the contribution of women to the film industry, both in front of and behind the camera. Launched in May 2015 by Kering in partnership with the Festival de Cannes, Women in Motion is an integral part of the Festival’s official program, and is active around the world through a variety of events.

This initiative is based on two fundamental actions: its Talks, which are open to journalists and film professionals, enable leading personalities including Jodie Foster, Diane Kruger, Robin Wright, Salma Hayek Pinault, Juliette Binoche, Chloe Sevigny, Agnès Varda and Frances McDormand, to compare their experiences and views on the issue of women’s contribution to cinema, and also to share their recommendations for the advancement of women’s representation in the industry.

The Women in Motion Awards, two awards given each year, one to an inspirational figure who embodies the values of the program, and another to a promising name in cinema who also receives financial support for future film projects.

By placing creativity at the heart of its strategy, Kering enables its Maisons to set new limits in terms of their creative expression while crafting tomorrow’s Luxury in a sustainable and responsible way. We capture these beliefs in our signature: ‘Empowering Imagination’. In 2017, Kering had nearly 29,000 employees.

Finding the perfect red has never been easier as each shade has been chosen to specifically complement the diverse skin tones of six of the L’Oréal Paris ambassadors, resulting in a selection of matte reds that are tailor-made to suit every woman. 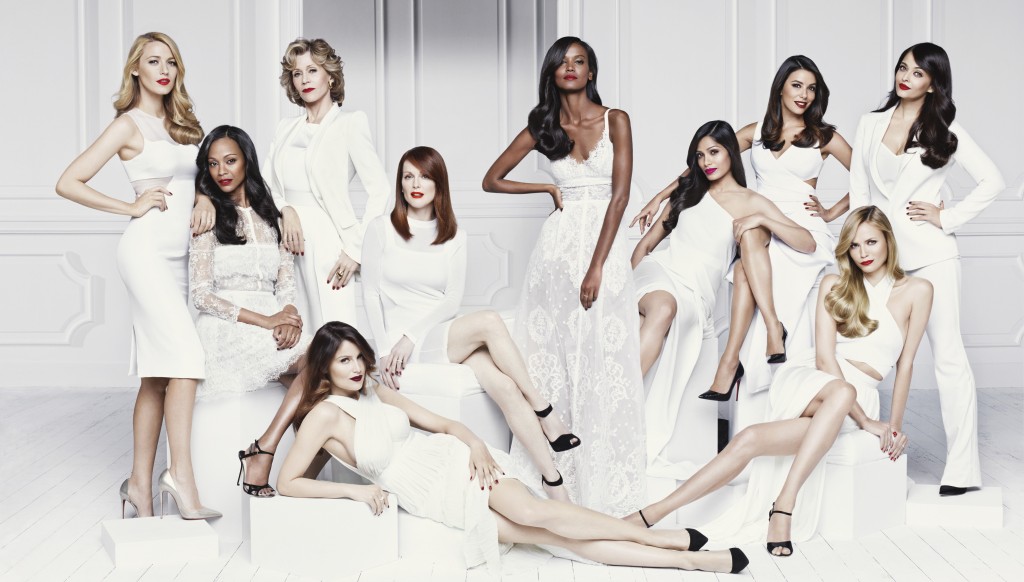 Whether you are a Jane Fonda, Blake Lively, Eva Longoria, Freida Pinto, Laetitia Casta, Doutzen Kroes or Jennifer Lopez type of red, there is a shade that is right for you. The collection features both a matte lipstick and a matching nail colour.

Blake’s Pure Red is the most iconic red for that Hollywood Glamour, whilst Doutzen’s Pure Red is a blazing tangerine red for a bit of a fiery look.

Eva’s Pure Red is an Urban Chic brick red and Freida’s Pure Red flirts with fuchsia for a flower red. If you’re looking for a bit of a deeper red, Laetitia’s Pre Red is a Garnet red for the most sophisticated dark lip and JLo’s Pure red is a ruby red lip for an opulent appearance.