One of the first jewellers to settle on the Place Vendôme in 1906, Van Cleef & Arpels is a fine jewellery legend founded by Charles Arpels and his brother-in-law Alfred Van Cleef. Adorning the bodies of royalty, socialites and celebrities for decades with exquisite precious stones, jewellery and fine watches.

The Maison’s first foray into fragrances came with ‘First’ for Women, in 1978, a classic timeless floral aldehyde scent. ‘First’ has remained a popular choice and inspired a number of flankers over the years. Other notable releases include men’s classics, ‘Pour Homme’ (1978), ‘Tsar’ (1989), and the ‘Collection Extraordinaire’, a luxury line whose first fragrance was introduced in 2009.

A beautiful collection of scents and the luxurious Collection de Extraordinaire have since joined the ever-popular First Eau de Parfum. Carefully crafted and beautifully bottled, each fragrance draws on the same innovation and attention to detail that brought the jewellery house to notoriety.

Today te Parisian Maison presents Patchouli Blanc as the new fragrance of their exclusive Collection Extraordinaire. This is also the third woody-musky perfume of the collection with the ‘Blanc’ label. The first was ‘Santal Blanc’ in 2019, followed by ‘Oud Blanc’ in 2020.

I felt like recreating the feeling of soft, enveloping cashmere; I wanted the fragrance to translate the idea of tender, cottony wood with a literally irresistible clean smell. That’s why I started by choosing a very specific, sheer and floral fraction of patchouli.

A symbol of purity, softness and perfect balance, ‘white’ is a very inspiring theme for the Collection Extraordinaire. Patchouli Blanc is announced as a light and crystal-clear interpretation of the scent of patchouli and one of the three editions of ‘white woods’ from this collection.

Encased within a delicately printed flacon, the Patchouli Blanc Eau de Parfum marries enveloping cashmere, fresh rose and musky wood for a truly sensuous aroma. A special quality of patchouli, an airier and more floral version, was chosen for this composition, combined with a bouquet of fresh roses on a delicate musky-woody background. Top notes are Aldehydes and Pink Pepper; middle notes are Patchouli and Rose; base notes are Cashmere Wood and White Musk. This pure, clean scent provides an instantly refreshing lift when spritzed.

Atelier Cologne, founded in 2009 and based in Paris and New York, by French husband-and-wife team Sylvie Ganter and Christophe Cervasel which, perhaps, partly explains the brand’s fondness of creating complementing pairs of scents. Although, as fitting for these gender-fluid times, all the Atelier Cologne fragrances are unisex.

Specialising in colognes made from citruses blended with precious raw materials in perfumery for balanced and long-lasting scents, innovative French perfume brand Atelier Cologne, wich was the first maison de parfum to create Cologne Absolue, have launched a pair of fragrances, Camelia Intrepide and Emeraude Agar – the latest additions to the brand’s Métal collection.

Master perfumers themselves, Ganter and Cervasel worked in the fragrance business where they met, fell in love and subsequently married. As youngsters they loved eau de colognes for their freshness, splashiness and effervescence and so decided to set up a fragrance house based on the best of colognes but using unusual, rare extracts and ingredients with signature citruses bringing up to date and reinterpreting the traditional citruses used in colognes of the past.

However what Ganter and Cervasel didn’t love about colognes was how quickly they faded on the skin – their perfumes would have to be long lasting. So they created a formulation they call Cologne Absolues which are very dense and rich formulas containing 18 per cent perfume – in other words, pure perfume. Usual colognes usually contain five per cent perfume and a rough approximation, eau de toillettes contain 8 per cent and eau de parfum around 15. 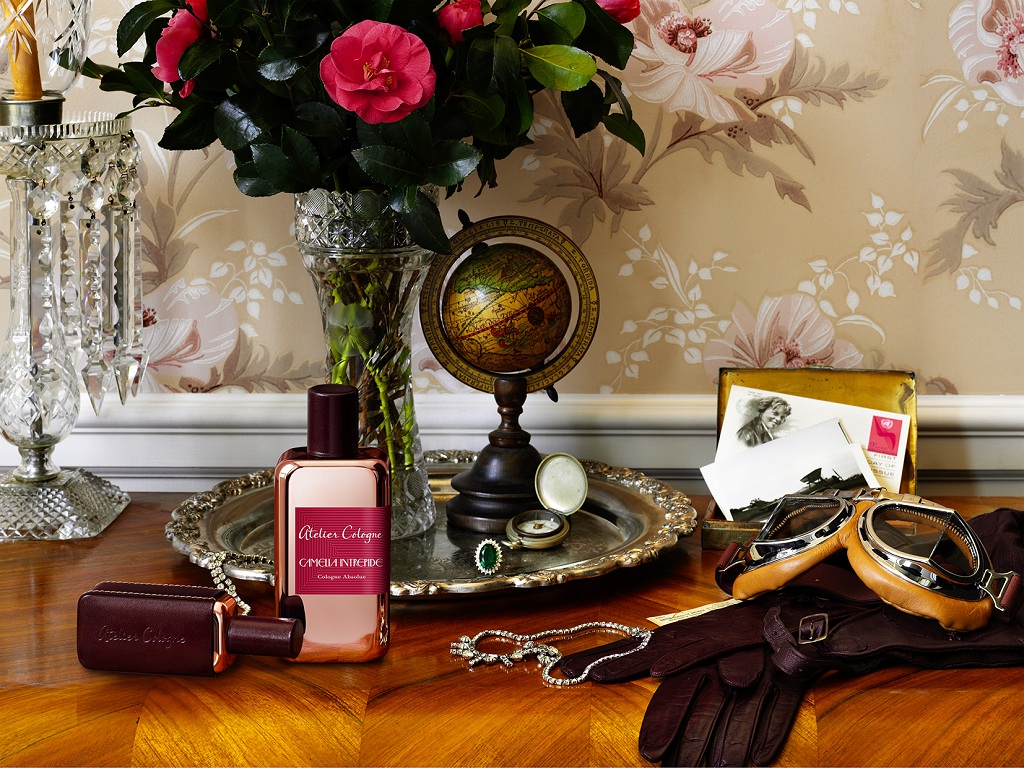 Each fragrance by Atelier Cologne tells a story of “treasured emotions and powerful memories”, and are packaged in chic custom-blown high quality glass bottles (often metallic) and the latest launch are no exception to this. Camelia Intrepide and Emeraude Agar, part of Atelier Cologne’s Metal range, and developed by the renowned nose Jerôme Epinette, (the creator of many of the line’s output as well as fragrances for Byredo and Frapin) are inspired by the American pioneering aviator and adventurer Amelia Earhart – the first female pilot to fly solo over the Atlantic Ocean – and these colognes tell the story of an independent – yet passionate – couple. As Atelier Cologne put it, (and the brand loves a dramatic and expressive tag line),

She is an aviator, high in the sky; he is a wild explorer, earthy yet eloquent. And as in all the best relationships, he brings her down to earth, while she inspires him to new heights.

Camelia Intrepide and Emeraude Agar have been cleverly created to share olfactory connections of harmonising notes of Calabria bergamot and rose. The ‘female partner’ Camelia Intrepide – where the citrus comes from lemon from Sicily, bergamot from Calabria as well as contrasting ingredients camellia leaves, rose, white leather and amber – opens with an Earl Grey-like and citrus flash and then settles to entrance with a beguiling rose and amber giving a spicy  warmth and depth. This is a long-lasting perfume which delights and intrigues.

My spills (test strips of thin card) still retain the scent which hasn’t faded five days after spraying. Cervasel explains their staying power is due not only the high concentration of ingredients but as well all their colognes are uniquely structured like an hour-glass shape rather than a pyramid (as most scents are) so the top notes are as robust and as long-lasting as their lower ones. 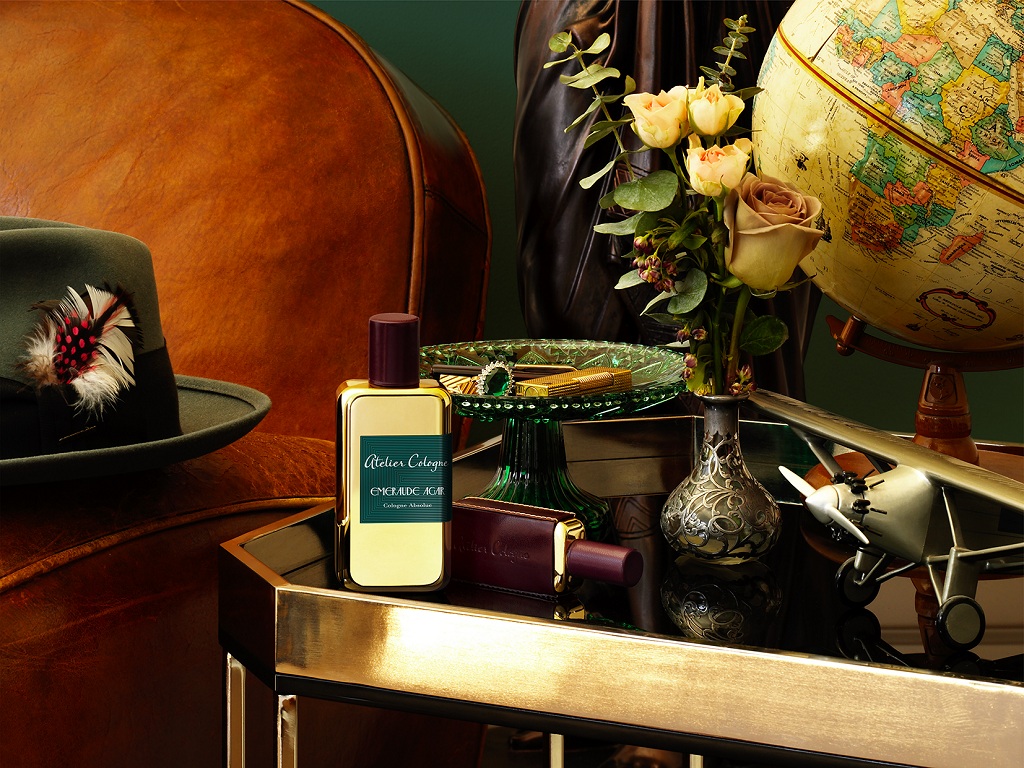 The ‘male’ of the pair, Emeraude Agar, is composed of angelica, black pepper, geranium, eucalyptus, agarwood (a kind of oud), sandalwood and gaiac wood. On first spray, it opens up powerfully – leathery, rich and deep. The oud here, however, is a cleaned up one which is very easy to wear yet still packs a punch with the bergamot lightening it up. This is a supple and masculine cologne – subtle, lingering, refined but not overbearing (as some ouds can be).

This is a distinctive, sophisticated and intelligent cologne – and would, I think, if we want a partner for Amelia Earhart, travelling forward in time is personified by the America actor Sam Shepard (who embodies a deep intellectual with a rugged pioneering spirit) which he could wear in the film The Right Stuff where he starred as the American hero Chuck Yeagar – the first pilot to break the speed of sound.

These distinctive colognes would make great gifts for distinguished wearers who appreciate high quality fragrances which are somewhat out of the ordinary. They are both availble as are available in two sizes, 30ml travel size and 100ml.

Come into the world of Atelier Cologne and discover Camelia Intrepide and Emeraude Agar. 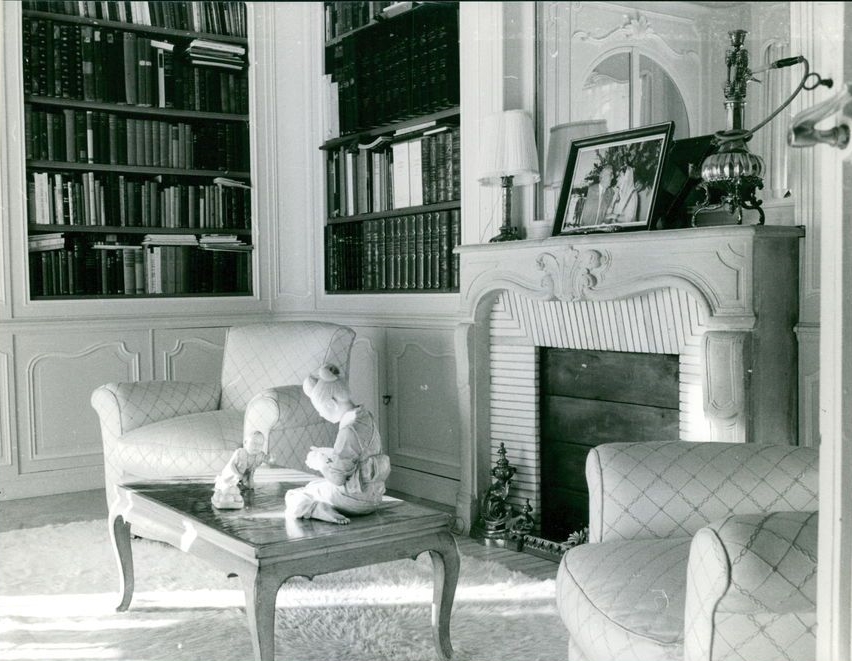 Byredo has always been one of the most forward-thinking perfume brands – and their new Bibliothèque home fragrance shows that its charismatic owner, Ben Gorham, is still thinking ahead of the curve.

What we like about it – apart from its appealingly chunky dark-grey bottle and minimalist graphics created by M/M Paris – is the fact that it’s a room spray rather than a scented candle. That might not sound like much to get excited about, but with the scented candle market reaching saturation point, it’s refreshing to see a home fragrance in a different format.

Bibiothèque is based on one of Byredo’s most popular scented candles. Byredo wants you to reconsider lighting that scented candle and opt instead for a couple spritzes of its Bibliothèque home fragrance spray. Far from a middle-of-the-mall room spray, this scent has peach and plum base-notes, mixed with patchouli, violet and peony, and a little vanilla added for good measure. 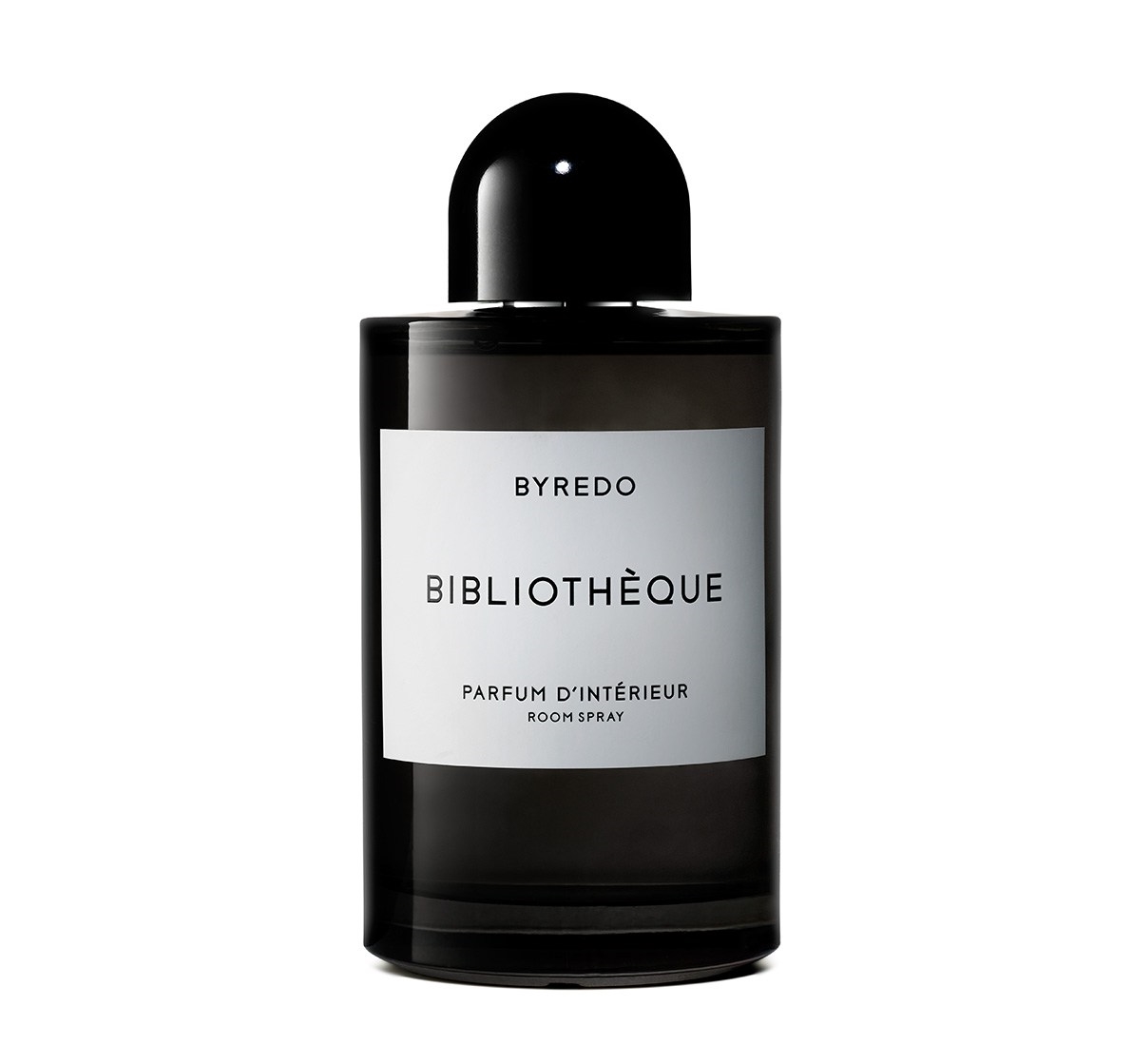 That might not sound – or smell – very bookish, but this otherwise rather sweet fragrance (originally created by perfumer Jérôme Epinette at fragrance house Robertet) is tempered by a leather note that harkens back to the binding of antique hardcovers for a reminiscent touch.

Along with an attractively crafted 250 mL bottle, the restrained packaging and minimal graphics help make this a true must-have for the modern home. One for the bookshelf, we’d say. Available now for approximately $90 USD at Byredo.

Welcome in the world of Byredo. 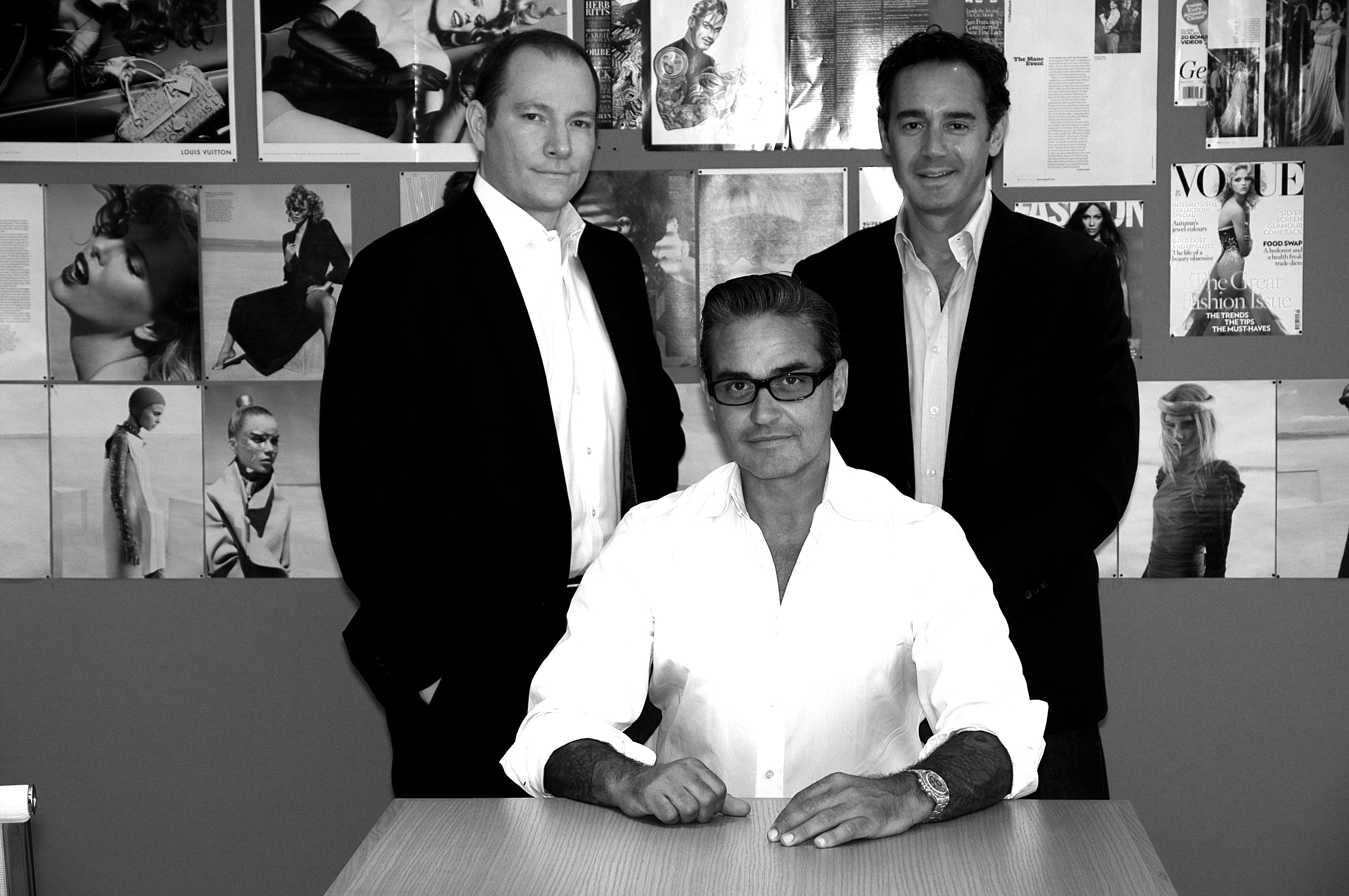 Back in 2008 when hairstylist Oribe Canales, who can count on Karl Lagerfeld and Gianni Versace as mentors and who has Anne Hathaway and Jenifer Lopez as client – to name just a few – first launched his haircare line, which featured a memorable striking scent, co-founder and president Tev Finger thought the fragrance would have a negative effect on sales… oh..boy was he wrong!

Fragrance was never intentional in hair care. It was technically a generic second thought

The luxury haircare brand are taking the beautiful scent that has come to be known of their opulent hair products and bottling it – quite literally. The debut unisex fragrances have been created alongside Jerome Epinette and Pierre Wulff of Robertet and consist of the already iconic Côte d’Azur scent – which permeates the majority of its shampoos, conditioners and styling products – along with Silver Pearl.

I always felt that fragrance was a major ingredient that was missing in luxury hair care. Scent is such an important aspect of who we are and how we respond to things.

The citrus floral Côte d’Azur fragrance features top notes of fresh lemon, blackcurrant, Calabrian bergamot, plum and Sicilian orange; over a heart of tuberose, white butterfly jasmine, blue cyclamen and a drydown of sandalwood, vetiver and crisp amber. Silver Pearl, which is described as ‘a green fougère’, consists of top notes that include green fig, bergamot, and fresh mint; atop a heart of lavender, geranium, bamboo accord and water lily, with a base of black amber, dewy violet and leather accord.

Côte d’Azur and Silver Pearl Eau de Parfum sprays, each 50 ml. for $85, will launch this coming September across 1,400 salons.

More about these fragrances soon here on Yakymour… 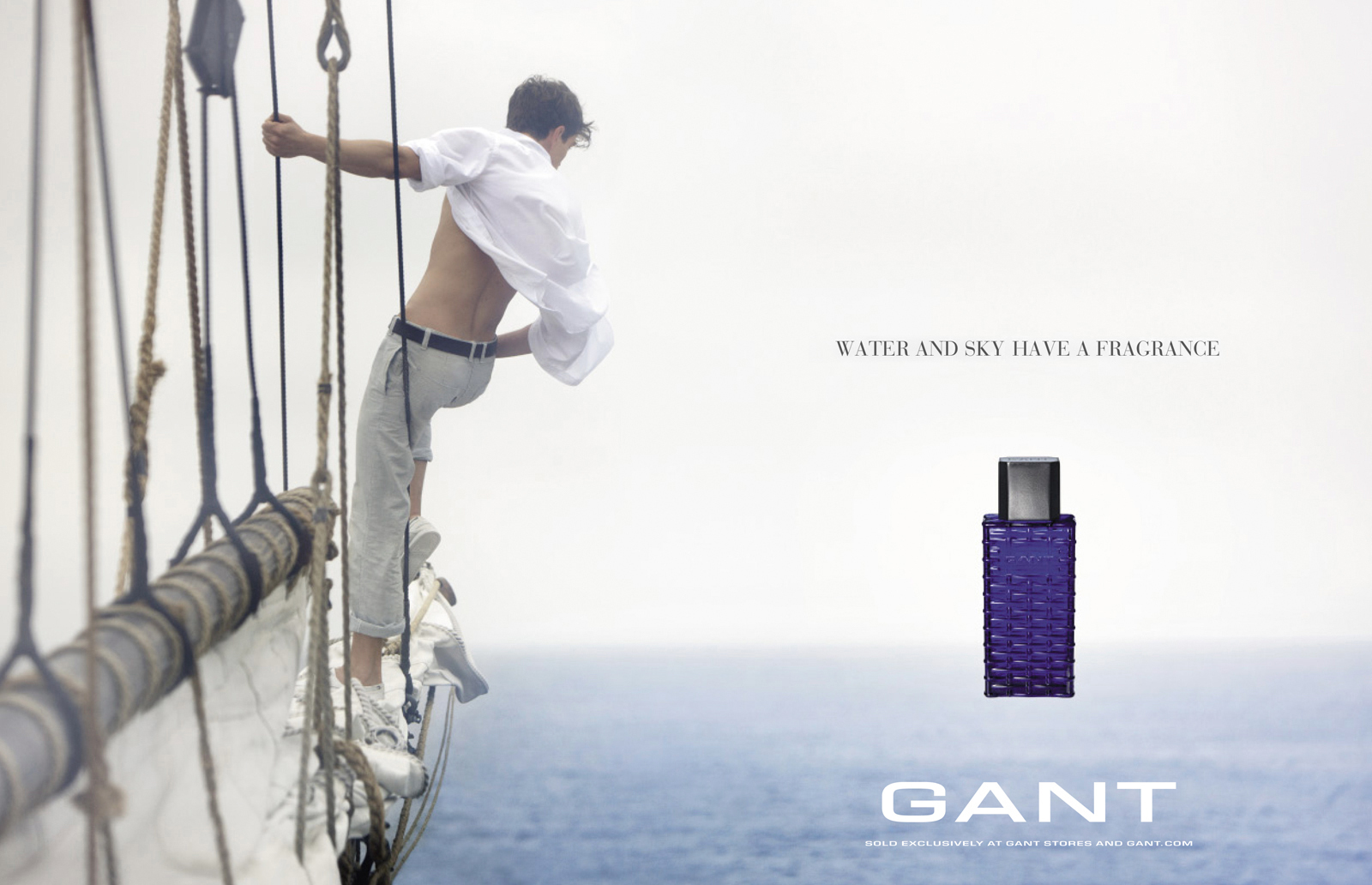 Swedish fashion house Gant launches a new masculine fragrance with a pleasant freshness and a lovely aroma, Gant. Gant by Gant is meant to convey the fresh and airy sense of the ocean, melded with the dark woods and tar smells of nineteenth century clipper ships.

Gant by Gant was created by famous perfumers Pierre Wulff and Jerome Epinette. It blends coriander, cinnamon, lemon, lavender, Virginian cedar, marine accord, suede, sandalwood, cypress and amber. Perfumer Pierre Wulf assured that Gant by Gant would have a unique staying power, saying “If you wear this fragrance, no one will mistake it for something else. People will ask what it is”. 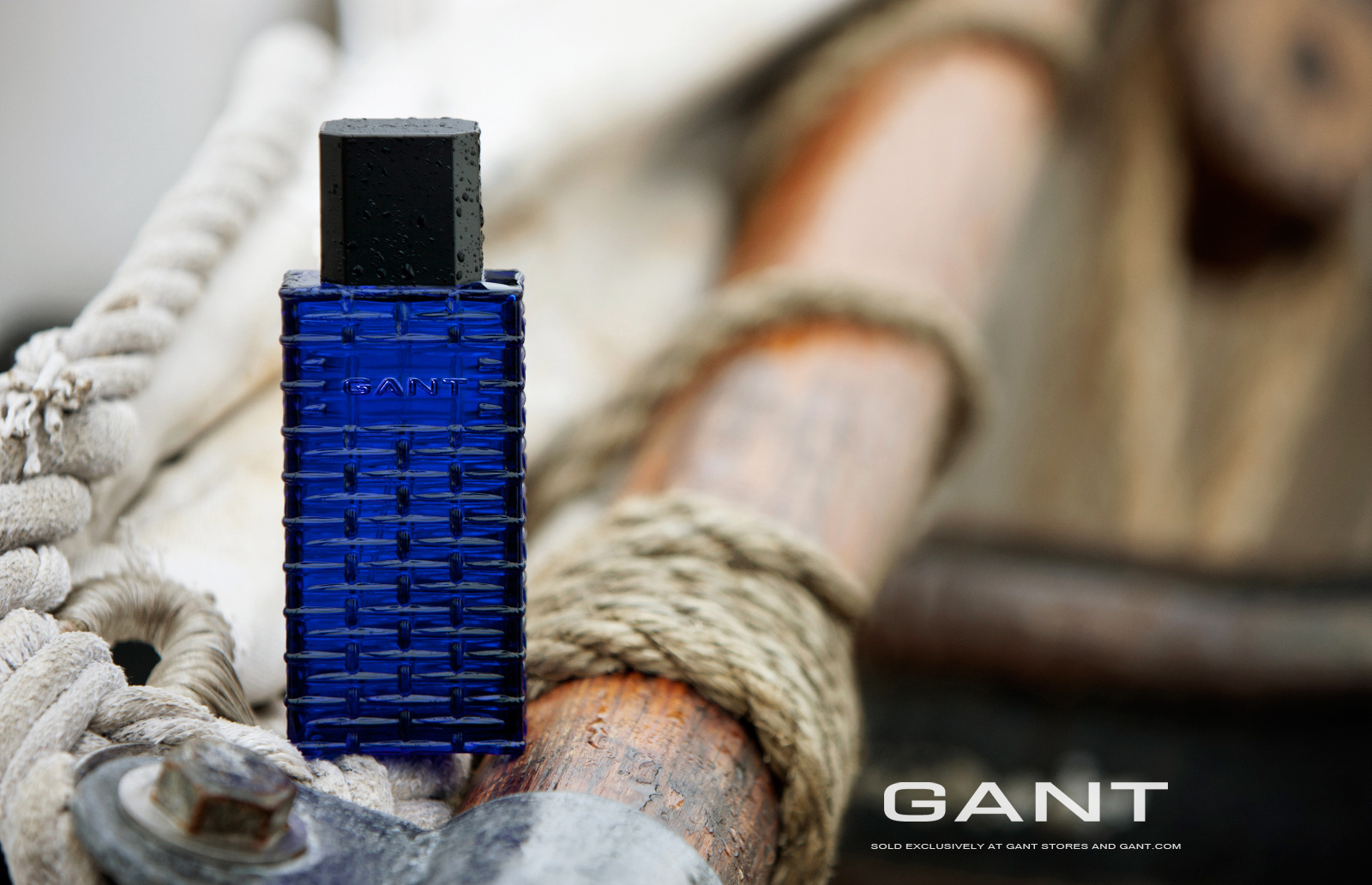 Gant by Gant fragrance comes in a dark-blue color bottle with a shape reminding of ‘wicker baskets that cargo ships in the old days used to transport fragile good’.

Gant by Gant will be available on the markets in 50 amd 100 ml Eau de Toilette from October 2011.