Anne Klein was an American fashion designer and businesswoman, the founder of Anne Klein fashion house. Her design career began in 1937 when she was awarded a scholarship to attend the Traphagen School of Fashion, which led to her first job as a sketcher for dress firms on 7th Avenue. In 1940, Anne Klein began making a name for herself as a designer. She first began designing for Maurice Rentner at his business, Maurice Rentner, Inc., which produced ready-to-wear designs for men and women

In 1948 she married clothing manufacturer Ben Klein, with whom she launched the Junior Sophisticates clothing line,  which aimed to make juniors’ clothes look more grown-up and less childish. Anne Klein was the principal designer at Junior Sophisticates until 1960, when her marriage ended. In 1963, she married her second husband, Matthew ‘Chip’ Rubenstein, and in 1968, they founded Anne Klein & Company at 39th Street. She also opened Anne Klein Studio at 57th Street. 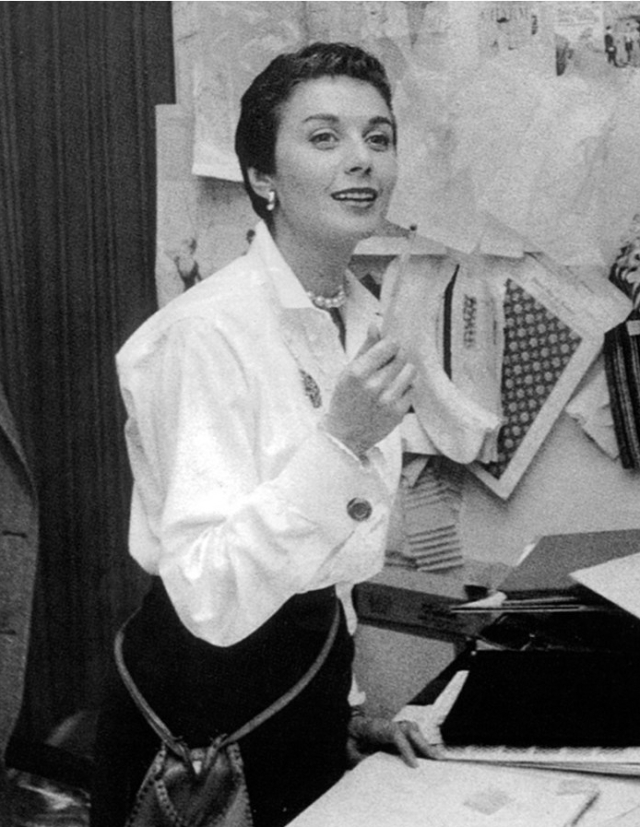 On March 19, 1974, Anne Klein died of breast cancer at Mount Sinai Hospital, New York, NY. After Anne Klein dies, Donna Karan and Louis Dell’Olio take over the design direction of the company. Today the iconic women’s fashion brand Anne Klein is an American privately held company owned by WHP Global who acquired the brand in July 2019, and sells a full lifestyle assortment from apparel, to footwear to watches to jewelry and is sold worldwide.

WHP Global (‘WHP’ or the ‘Company’), has united with the namesake designer’s granddaughter Jesse Gre Rubinstein to provide relief during the Covid-19 pandemic. To meet the immediate need for Personal Protection Equipment (PPE), the Company today announced the procurement of 100,000 face masks through its supply chain, which will be distributed with Jesse to essential workers and community organizations providing relief across the United States.

“Uniting the brand Anne Klein with the founder’s family at this critical time and making a commitment to distribute 100,000 masks to those on the frontlines helping our communities, is a win/win. This is just the beginning of our planned collaboration with Anne’s granddaughter, Jesse. We’re thrilled to partner with her,” said WHP Chairman and CEO Yehuda Shmidman.

I am honored to have the opportunity to play a role in supporting my grandmother’s legacy by highlighting inspiring individuals who even during this time of great uncertainty, embody the vision and strength to empower their community and uplift those around them. My hope is that this initiative serves as the launch of a powerful network that can both support and inspire others to help not only in the present, but as we begin to rebuild.

Additionally, WHP has tapped Jesse and her agency to spearhead the upcoming launch of Anne Klein’s new social series, featuring notable individuals making a difference and connecting communities during this global pandemic. Following in the footsteps of Anne Klein who inspired so many, Jesse will host a Facebook Live series featuring the heroes of today, inspiring the next generation of trailblazers, with guests from a variety of industries who are championing aid during the pandemic.

Come into the beautiful world of Anne Klein.