With L’Eau Privée, I wanted to create a light and delicate version of Coco Mademoiselle, imagining a night fragrance like a soft and sensual veil.

For the first time, Chanel’s in-house parfumier has imagined a night fragrance. L’Eau Privée has been described as ‘a watercolour scent’, composed around a delicate accord of jasmine absolute and rose petal notes. L’Eau Privée exalts the most sensual and softest musk notes of the Coco Mademoiselle fragrance. Chanel says it remains true to the original oriental fragrance but is more ‘confidential’ and delicate. It is seen as a ‘night scent’. It’s the ultimate touch before night falls.

You would love to apply it on your pulse points, where the skin is warmest: ‘the place where you would be kissed’, on the wrists, behind the ears, in the dip of the décolleté or at the nape of the neck, or even to scent the hair. Screen icon Marilyn Monroe famously said in an interview in 1952 that she wore ‘five drops of Chanel No. 5’and nothing else in bed. I am going to say, I only wear a spritz of L’Eau Privée.

The flacon of Coco Mademoiselle L’Eau Privée is in translucent frosted glass, with the words L’Eau Privée in gold lettering, looking more subtle against the contents.

Chanel Coco Mademoiselle L’Eau Privée Eau Pour La Nuit is available in a 50 and 100ml flacon, and is available at selected stores worldwide, and online. Come into the beautiful world of Chanel. 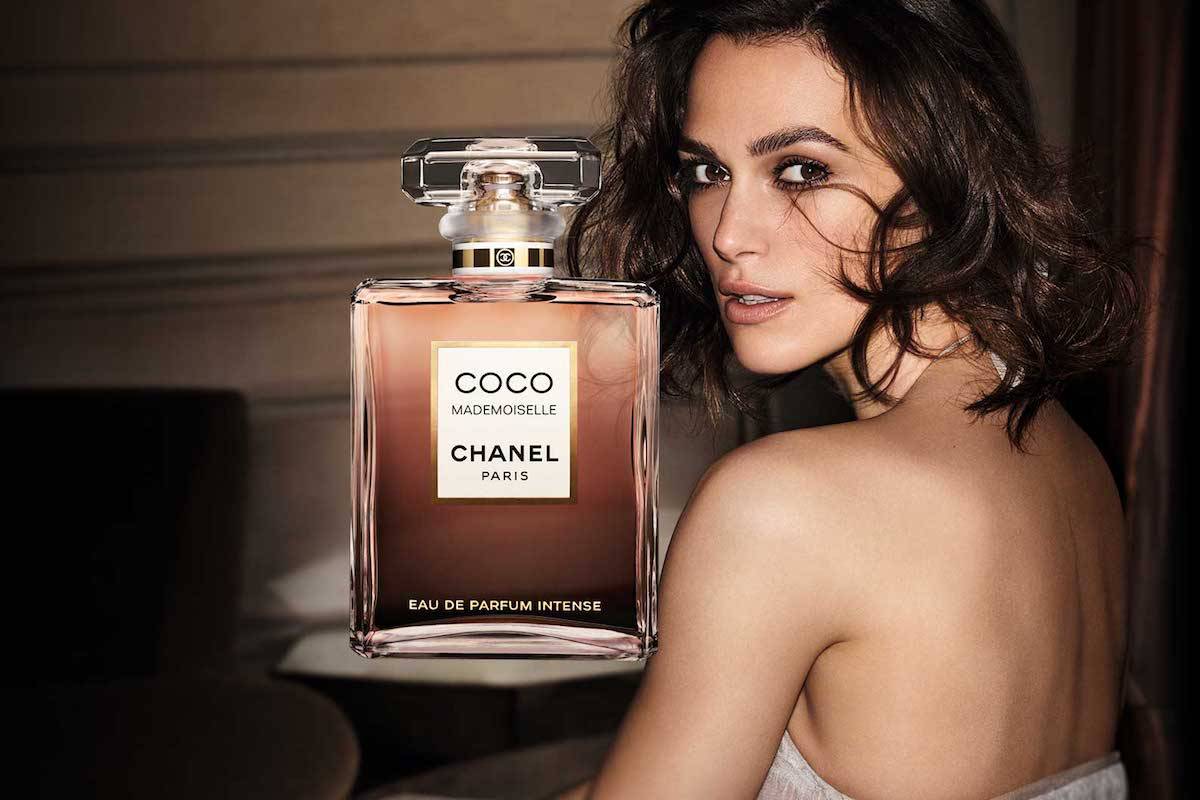 Back in 2001 when Maison Chanel launched Coco Mademoiselle, it quickly kickstarted the trend for unconventional scents thanks to its sensual composition. A two-tiered fragrance that combines the zest of citrus with the sophistication of patchouli, it was crafted for the rebellious woman who is the very definition of elegance.

Sensual, captivating, and seductive are only a few words that describe a Chanel perfume. One of the most praised fashion houses in the world, Chanel crafts timeless, precious and delicate perfumes. Fast forward 17 years later, the Coco Mademoiselle gets an update by way of added depth to its scent profile with a newly launched eau de parfum. Catered for those who aren’t afriad to embrace their follies and passionate pursuits, the reinvented fragrance captivates with its strong character.

The result is a heady scent comprising of citrusy and woody notes, accented with a fruity touch. At first whiff, Sicilian orange and Calabrian bergamot take charge, giving way to the magnetism of Indonesian patchouli, rose and jasmine. But what makes it stand out is the amber accords of Tonka bean and Madagascar vanilla absolutes — a subtle way of creating a whole new intensity to the patchouli without overwhelming it completely.

Created by Oliver Polge, Coco Mademoiselle Intense promises to be more powerful, with a more deeper aroma coming with an intense oriental/woody composition. Even though it opens with fresh Sicilian orange and Calabrian bergamot, it unveils its real character with woody notes of Tonka bean and patchouli mixed with floral accords of roses and jasmine.

It might be an understatement that the Coco Mademoiselle Eau de Parfum Intense is taking sensuality up a notch. “I wanted to remain close to the original formula, while giving it a whole new dimension. I wanted to increase the proportions of fractionated patchouli. Push it to the limit. Unleash its power on the skin without altering the freshness of the top notes.

The Sicilian orange and Calabrian bergamot, as well as the fruity accent that distinguishes Coco Mademoiselle can still be identified, but within a few minutes, the Indonesian patchouli takes root and winds itself around the heart of rose and jasmine, ‘giving it a whole new dimension’, explains Olivier Polge. To create an even more magnetic and enduring fragrance, Olivier combined a higher proportion of patchouli leaves with an ambery accord composed of Tonka bean and Madagascar vanilla absolutes. This is a delicate way of adding depth to the structure of patchouli and portraying Coco Mademoiselle EdP Intense even more addictive.

The bottle design remains the same, while the color of the perfume appears to be more gold intense. Chanel Coco Mademoiselle Intense is available in 50 and 100ml Eau de Parfum.

Gorgeous actress Keira Knightley is again the face of this breath-taking and luxurious perfume, launched by Chanel. The British actress, who has been the face of Coco Mademoiselle for a decade, has taken up her fragrant role again playing an irresistibly carefree game of seduction in the new advertising film. This opens with images of her looking through her Haussmannian apartment the morning after a wild party – a Parisian soirée at which our heroine had fun, without ever taking her eyes off the man of her desires. 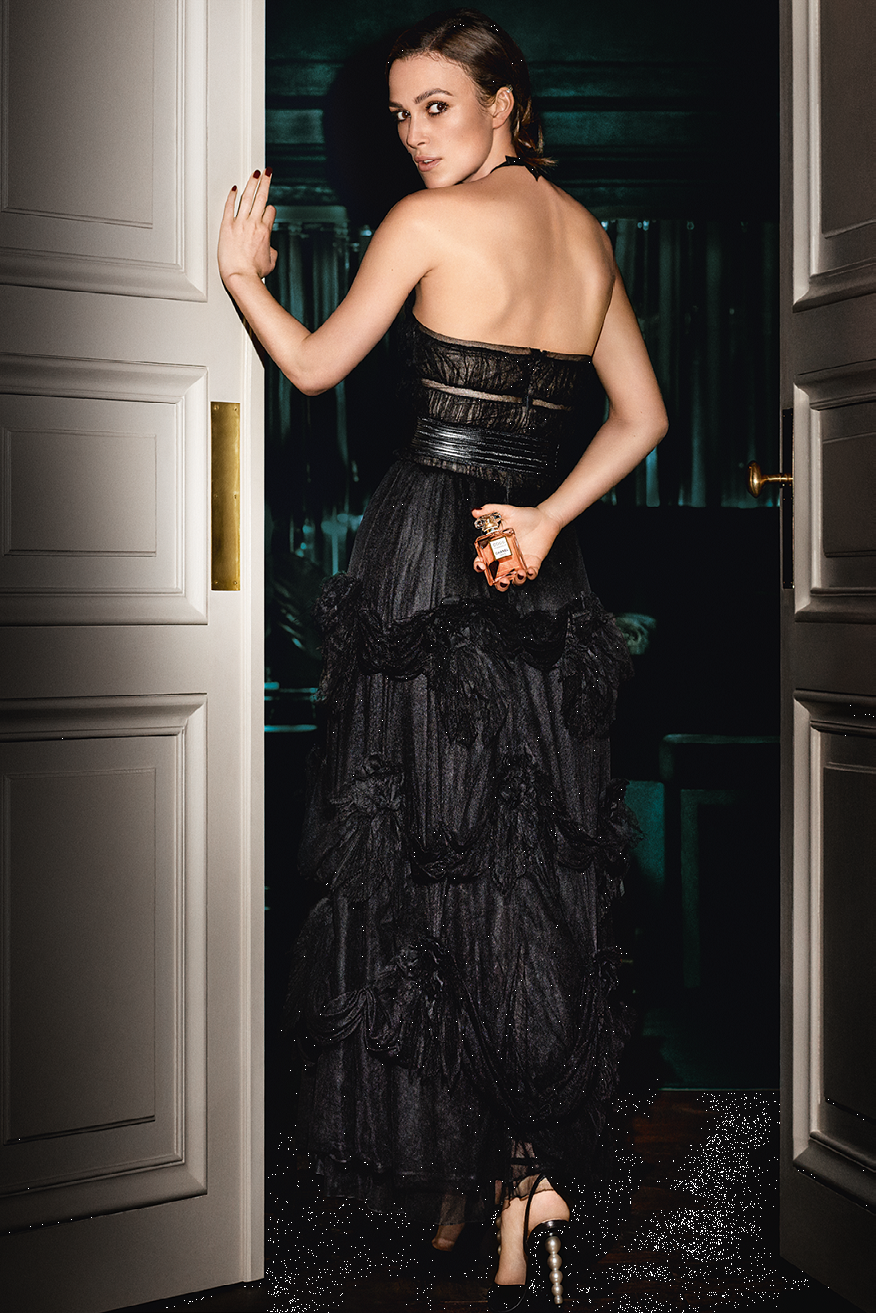 Keira Knightley’s rebellious elegance and luminous strength radiate from the screen. Like a lady adventurer you can sense is demanding and sophisticated, she is a pioneer who calls the shots, drawing others along in her wake.

Below, the face of Coco Mademoiselle Keira Knightley stars in the latest film campaign for the fragrance:

Sensual, captivating, and seductive are only a few words that describe a Chanel perfume. One of the most praised fashion houses in the world, Chanel crafts timeless, precious and delicate perfumes. This year, famous Coco Mademoiselle perfume is followed by a new more intense composition, Chanel Coco Mademoiselle Intense.

Coco Mademoiselle Intense promises to be more powerful, with a more deeper aroma coming with an intense oriental/woody composition created by famous perfumer Olivier Polge. Even though it opens with fresh Sicilian orange and Calabrian bergamot, it unveils its real character with woody notes of Tonka bean and patchouli mixed with floral accords of roses and jasmine.

The bottle design remains the same, while the color of the perfume appears to be more gold intense. Chanel Coco Mademoiselle Intense is available as 50 and 100ml Eau de Parfum.

Gorgeous actress Keira Knightley is again the face of this breath-taking and luxurious perfume, launched by Chanel.

To celebrate the launch of sparkling new pieces in its iconic collection, Maison Chanel has unveiled, its long-time muse, Keira Knightley as the face of its Coco Crush fine jewellery collection.

French Maison Chanel and British actress Kiera Knightley have had a long-standing relationship; she was already the face of the perfume Coco Mademoiselle and the Rouge Coco collection, appeared in the Beauty Talk video series and was even recently honoured by the brand at an exclusive event in New York. That successful partnership looks set to continue as Keira Knightley now fronts the Coco Crush jewellery campaign, photographed by Mario Testino.

The Coco Crush fine jewellery collection first launched last year, is entirely dedicated to the ‘matelassé’ or quilted pattern seen in a myriad of the French luxury label’s designs from as early as 1920, and most notably, in its best-selling handbags.

Diamond quilting is one of the maison’s signature motifs – alongside pearls, beige, and the cropped black jacket – and can be seen not only in handbags but also in its clutches, jackets, footwear and accessories, and even haute couture.

A method originating from the equestrian world, Gabrielle ‘Coco’ Chanel co-opted the quilted pattern, which made saddles more comfortable for horse-riding, to create the beige cushions on the large sofa in her famous apartment on Rue Cambon in Paris. She would later incorporate that form and style into the 2.55 handbag, launched in 1955.

The jewellery collection brings the ‘criss-cross’ pattern to the forefront in a bold new interpretation, finding inspiration from leatherwork and finely engraving it into gold. In a departure from the label’s more intricate Comète or Camélia collections, the limited-edition Coco Crush pieces showcase refined curves, channeling the essence of motion.

The Coco Crush pieces are sleek, adorning the finger or the wrist with voluptuous, feminine style. Scalloped edges make for comfortable wear on all occasions. 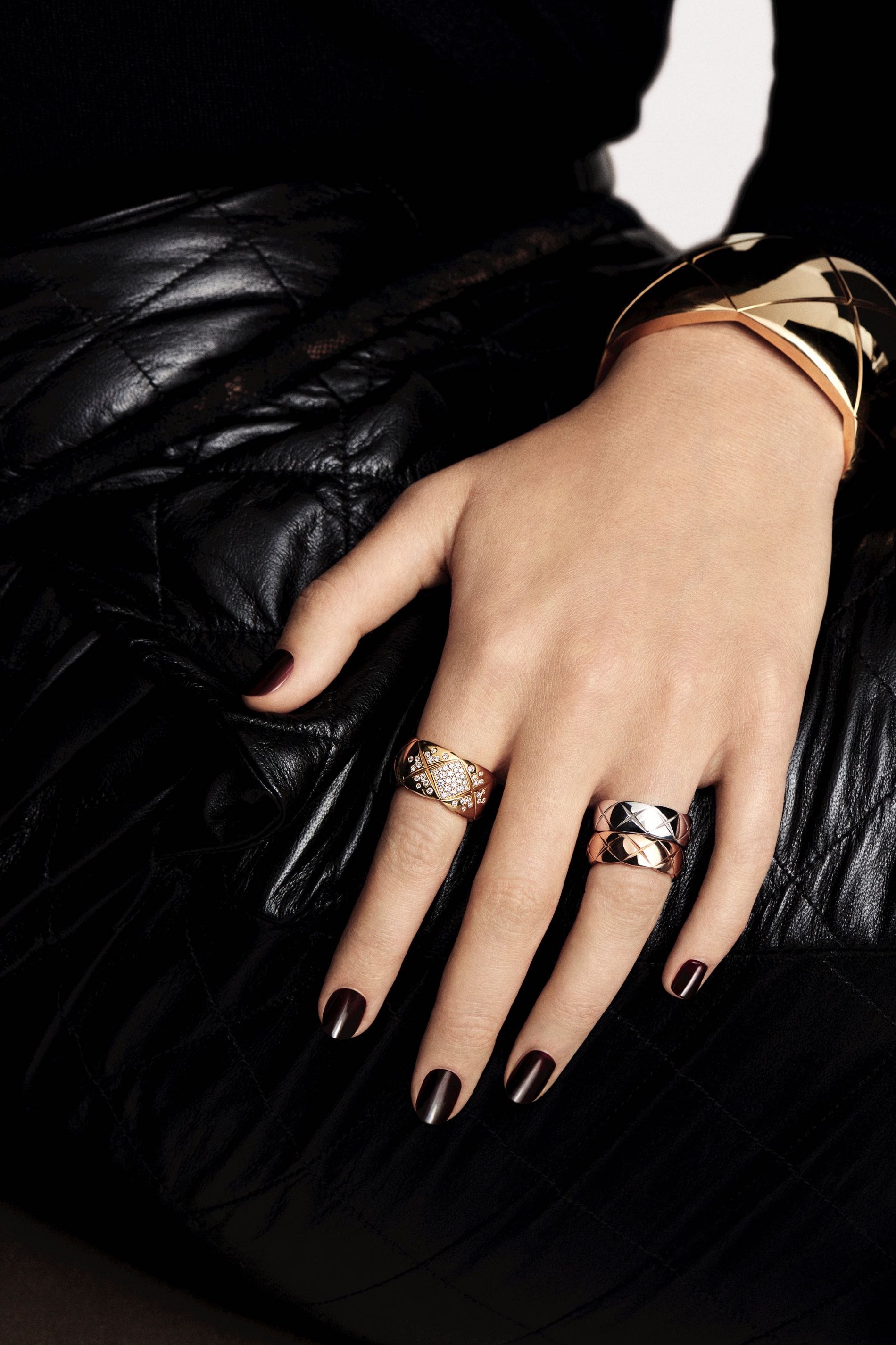 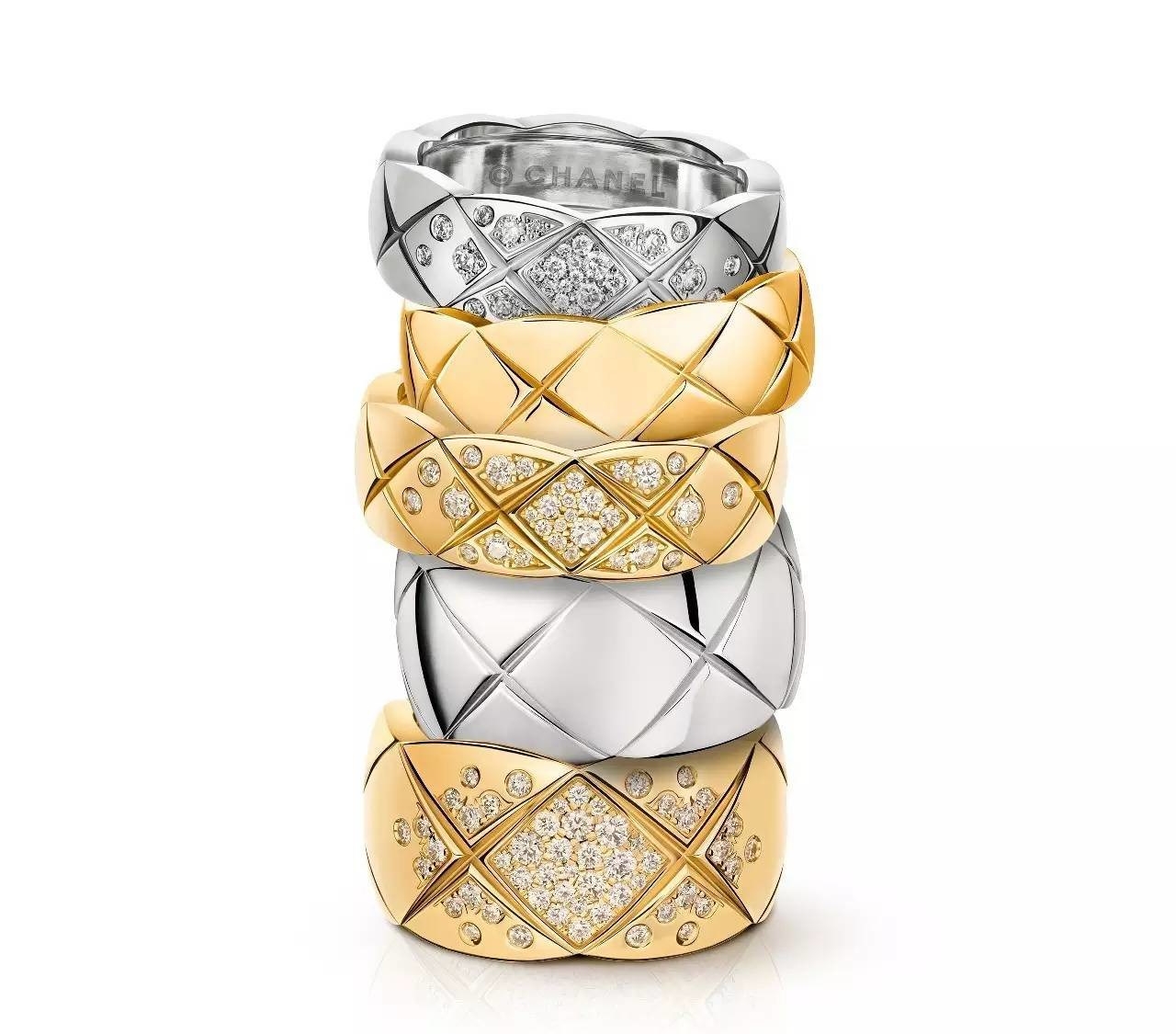 Two cuffs feature the lion, another symbol dear to Coco Chanel (Leo was her star sign as well as lucky charm), engraved in the yellow and white gold, respectively.

To celebrate the launch of sparkling new pieces in its iconic collection, Chanel turned to its long-time muse Keira Knightley for a candid video campaign.

Similar to the Beauty Talk campaign, the new Coco Crush video ad follows a more conversational format, this time with Knightley answering a series of quick questions that reveals intimate details. Cleverly interspersed are questions on jewellery, allowing the actress to subtly put the spotlight on the new additions to the Coco Crush collection.

Karl Lagerfeld’s period film Once Upon a Time, which stars Keira Knightley as Gabrielle Chanel, is finally here – all 15 glorious minutes of it. The film marks a legendary 100 years for the French Maison.

In 1913, designer Gabrielle ‘Coco’ Chanel opens her first boutique in the French city of Deauville, from which she sold her hats.

Financed by her lover Arthur ‘Boy’ Capel, the seaside shop (located in Deauville) saw immediate success, and as they say, the rest is history. The subject of a new, black-and-white short film directed by current Chanel creative director Karl Lagerfeld, British star and face of Chanel Keira Knightley stars as the young Gabrielle, giving us a glimpse into Coco’s extraordinary fashion mind.

The designer-cum-director reportedly gave the actors (including Knightley, Clotilde Hesme, Lindsey Wixson, Stella Tennant and Tallulah Harlech) their lines just moments before shooting–which makes a lot of sense when you watch the film.

The dialogue is sometimes stilted and awkward. There’s one moment when Knightley, describing a hat to Amanda Harlech’s ‘lady of society’ character, seems at a loss for words. But then, since Lagerfeld was supposedly going for a ‘natural effect’ with the dialogue, that may have been the point. Or, maybe it has to do with the inexperience of some of the cast. Let’s just say we hope Lindsey Wixson, who plays Miss Wonderbilt, doesn’t try to make the transition from model to model/actress any time soon. Either way, it seems that long pauses and sort of awkward dialogue may be becoming a Chanel signature of sorts.

That being said, there’s still a lot to enjoy about the film, which is set at the first Chanel store in Deauville, circa 1913. We see Chanel interact with the city’s fashionable ladies and come up with the inspiration behind some of her most iconic designs. When Tennant’s character Lady de Grey tells Chanel she’s wearing her husband’s jacket, the designer remarks, “Tweed jackets are very chic on a woman”. Gabrielle always wanted to cover up her poor background and create her own story so she always had a taste for revolution. She had the idea to transform womenswear by shortening dresses, freeing the waist and cropping hair.

I’m sure Karl Lagerfeld is not going to be winning any awards for this, but it’s a bit of a treat to imagine the Normandy social scene and style at the time.

‘Once Upon A Time…’ by Karl Lagerfeld

Coco Mademoiselle is here again! Beautiful and independant and mischievous With Keira Knightley and Alberto Ammann, the movie is directed by Joe Wright.