Salvatore Ferragamo has ceaselessly sought and found inspiration from the most eminent woman of his time. Women that not only shine through their success, but also through their emotional harmony, self-confidence and elegance.

Inspired by the founder’s philosophy and vision, Salvatore Ferragamo bestows an iconic Eau de Parfum for a woman who desires genuine things and true moments of plenitude. A classic yet modern fragrance that encodes the pleasure of emotions and fulfillment of life: Emozione.

Created by Alberto Morillas and Amandine Marie from Firmenich, Salvatore Ferragamo Emozione is a multifaceted fragrance that combines feminine floral bouquets to a refined and precious woody texture enriched with a touch of sensual, glamorous chypre notes.

The luminous gleam of the juicy Bergamot’s freshness is softened by powdery Iris and White Peach notes for a velvety sensation. The heart expresses glamorous femininity through a bouquet of delicate Peonies, sensual Bulgarian Roses and addictive Heliotrope.

A harmonious embrace, between the mysterious Patchouli and intense Suede notes, enhances the scent’s richness that is exalted by a veil of White Musk, creating a sumptuous dry down.

Ferragamo’s craftsmanship values are also represented in the creation of the flacon that expresses the refinement and attention to detail values of the brand. Golden finishing on the top and sides of the flacon, along with the leather-like cream sides, embellish the preciousness of the bottle. While a final hint of classy lightheartedness is given by the iconic double Gancino chain.

The elegance of the essence is further expressed through the luminous peach colour juice and the ‘Emozione’ logo that stands out in black capital letters, to strongly emphasize the products name. The vivid richness and elegant glamour of Emozione are perfectly characterized by the combination of the outer packaging’s characteristic colours, peach and warm white, recalling the colour of the juice and the leather inserts, contrasting with the black Emozione logo.

At the top the fragrance, crystalized ginger sparks the senses with its fiery presence and an exhilarating burst of freshness. The sensation deepens as mid notes of a seductive raw salt signature and exotic agave nectar reveal bold sensuality, exposing an uninhibited masculinity. The base of the fragrance surfaces on the skin with deep, intense traces of mesmerizing vetiver and golden amber.

The combination of crystalized ginger, raw salt signature and addictive vetiver offers a new signature play between freshness and seduction.

The Calvin Klein Reveal Men bottle is designed by Sam O’Donahue of Established in collaboration with Calvin Klein and the Coty Inc. creative teamdesign, and is synonymous with purity, luxury, and a refined design aesthetic. 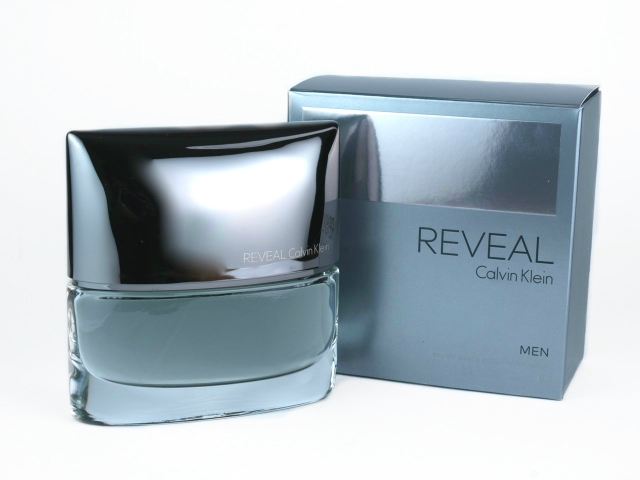 The carton is crafted in semi-sheer Mylar with a satin finish. A raised metallic rectangle embellishes the front with a smooth contemporary edge, mirroring the bottle inside.

Shot by renowned photographers, Mert Alas and Marcus Piggott, the Calvin Klein Reveal Men print campaign captures British actor Charlie Hunnam in a provocative embrace with Dutch supermodel Doutzen Kroes. The television campaign, directed by Jonas Åkerlund, expands upon the story begun in the print campaign to depict a game of voyeuristic seduction played out against the backdrop of the city skyline. Spotting each other from the windows of their facing high-rise apartments, a flirtation from a distance culminates when Doutzen arrives at Charlie’s doorstep and the game becomes real.