Originally from Liverpool, Griffiths graduated from the Kent Institute of Art and Design in Maidstone in 1995. After completing a one-year KIAD fellowship and moving to London he served an apprenticeship at the longest-established gold wire embroidery firm in the world. Here he worked as a gold wire embroidery designer for twelve years, eventually becoming the creative director. Carne produced intricate designs for the military and the film, theatre, fashion and advertising industries. His designs were used for the uniforms in the films Valkyrie, The Last King of Scotland, and in particular his ‘Red Death Coat’ was used in The Phantom of the Opera. Carne’s elaborate floral designs for Asprey were included in their first ever catwalk collection and his work was featured on the embroidered cover of the 80th Royal Variety Performance programme in 2008.

Carne Griffiths at work in his London studio (Click photp to enlarge).

Since establishing his own studio in 2010, Carne has exhibited in the UK at the London Original Print Fair at the Royal Academy, the London Art Fair in both 2011 and 2012, and overseas at Urban in Ibiza in 2011 and Arts After Dark, New Orleans in 2010. Carne also collaborated with the British photographer Rankin for a feature in the 2nd edition of Hunger Magazine early in 2012. 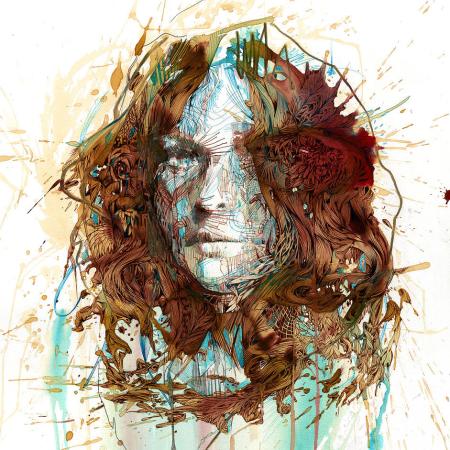 Carne Griffiths challenges conventional portraitures with his blend of human, geometric and floral forms. What you would not have guessed is that his method relies on ink and liquids such as tea, brandy and vodka. 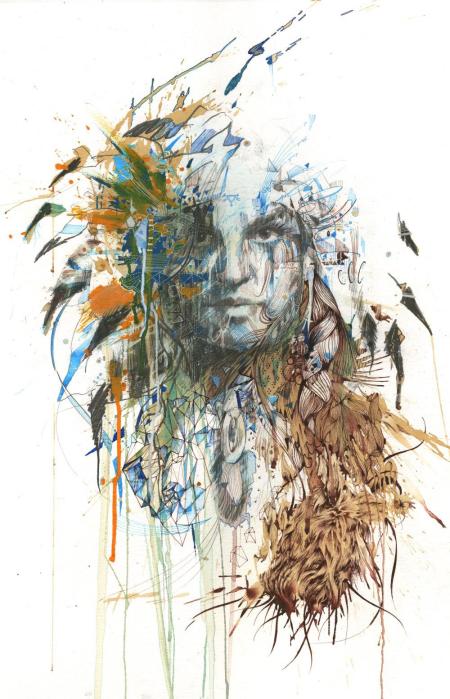 Carne Griffiths ‘Beneath the White’ Original painting in ink, tea and graphite (Click photo to enlarge).

He uses unconventional mediums to translate human and floral forms into seductive, penetrating images. Working primarily with liquids such as tea, brandy, vodka and calligraphy ink, Griffiths’ work blurs distinctive boundaries, manifesting the connection between the figurative and the abstract.

Griffiths’ relationship with art stems back to childhood, from which he recalls, “My earliest memory of drawing was creating spaceships from interlocking triangular shapes and repeatedly drawing the head of an Alsatian dog.” These reoccurring patterns and structures developed into a two-year apprenticeship, and later a 12-year career, as a gold wire embroidery designer for M.H & Company. After years of producing handdrawn embroidery designs for clients such as the Sultan of Oman and Chanel, Griffiths departed from the formatted, prescribed lines of embroidery design and embarked on an individual art career of illustration and drawing. Commenting on the influence of his past in embroidery on his art today, Griffiths claims that the training of composition and flow of line has had a tremendous impact on the way he utilises space: “I used to draw monograms often, and to create a successful monogram you need to achieve a balance between positive and negative space, and to create something of an asymmetrical balance. I think subconsciously I apply many of these principles to my drawings of floral and portraiture pieces.”

Griffiths is on an incredible journey – one that combines classic forms of aesthetics and beauty with new, innovative mediums and impressions. Fascinated by the effect of repetition and balance, Griffiths is an investigative creator who achieves artistic catharsis through the process, rather than the outcome, of his art. “My work is about energy and patterns to create a certain rhythm within the piece. If everything resonates correctly the piece balances and is successful. I get excited when a piece is progressing in a positive way, but when dissatisfied with parts of the work, destruction and rebuilding, is of equal importance. I think my most successful works are those which have undergone at least partial destruction of the image. Just like in life, we don’t always get things right the first time. It is a learning process.”

For commissions or enquiries about original artwork please contact carne@carnegriffiths.com 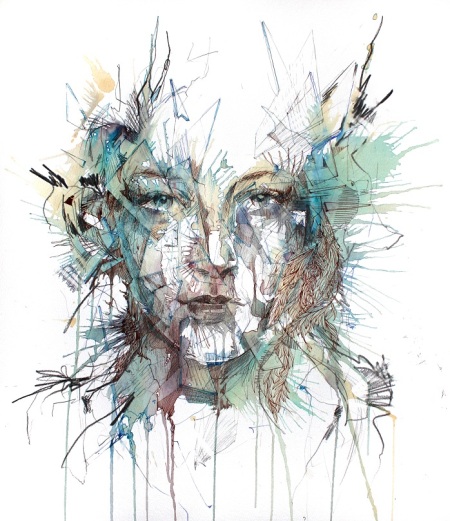